Prove your trading worth... 100% weekly on a consistent basis - long-term?

Bob LLewellyn (ForexAssistant)
Jan 30 2015 at 21:14
Member Since Jun 28, 2011   465 posts
Dr. Vodka,
I think I understand your point about the risk. Since the curve has risen the most toward the end, you must have maxed out the lot size, correct? Alright that doesn't do much good outside a competition but that 85% win ration and such a high profit factor has got my attention. What would it take to learn how to constantly get an 80+ win ratio like that? Can that be done on a regular basis?

Bob LLewellyn (ForexAssistant)
Jan 30 2015 at 22:57
Member Since Jun 28, 2011   465 posts
Thanks Dr. Got it. I guessed that the sizes had to be large but I didn't guess how many it would take. I won't go any further hear but I would like to thank you for helping me to understand you methods. I did indeed understand how the 85% was achieved but I am not sure how to adapt it to everyday type system. Its Ok though, it gives me something to think about.

Cholipop
Jan 31 2015 at 16:40
Member Since Aug 07, 2014   406 posts
This conversation is so simplistic that it makes me sick. Bob said he is looking to 'compromise profit for safety'. In what freaking world do you live in. Your not even safe in your own skin, so as long as you are exposed to the market your account could never be safe. The level of manipulation which can occur in forex by far exceeds that of say 'wall street trading'.

1) The spread which is clearly controlled by the broker, can turn your stop loss into swiss cheese. The spread can turn pending orders to market orders which once opened would create a margin call due to the Max leverage which you have set forth prior to the order being filled.

Most of you simple minded traders like Bluepanty and Bob haven't been trading long enough to even see the manipulation in real time. Bluepanty did say he was 'to lazy' to sit in front of a screen all day, which clears tell you a lot about his perception of what the market is.

If you see a person who has turned even 50% profit in a month, and that person has placed more then 50 trades, simply analysing their trades and only focusing on the Pip-drawdown will tell you if that person can profit in the 'long term' or not. Once again you simple minded fools fail to realize that, because Pip-drawdown isn't even mentioned on forums. You guys are more focused on ENDING UP being correct, then being CORRECT from the time you get into the currency.

Whatever your strategy is, 90% of time, a system will crash one day because the way it trades is wrong.

No one talks about equity curve that must be always (as much as possible) above growth.
The most important thing is the way it trades...

Any system trading this way will have much more chance to survive into this jungle rather than the way 90% traders trade... cutting profit too quickly and running looser trader. 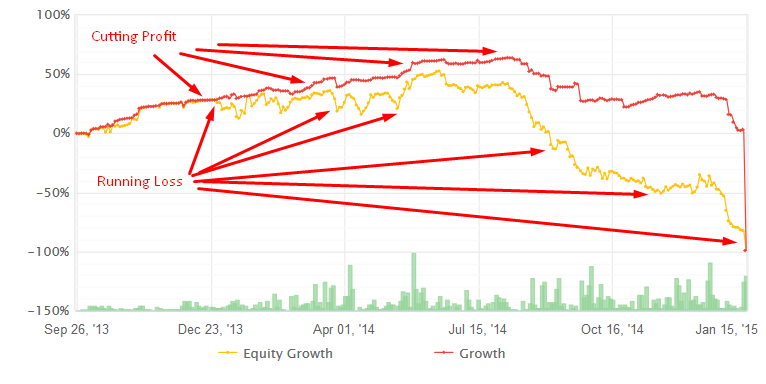 What kind of curve do you fancy?
When Equity is above Growth, system tends to go up and vice versa
Attachments: