GBP Pairs - Illiquid Market - Blown Accounts - What price did you get?

I experienced several margin calls from not only my own trading but other systems that I followed through signal. These margincalls turned into Negative balance and will likely cost me over $5000 in negative balances. 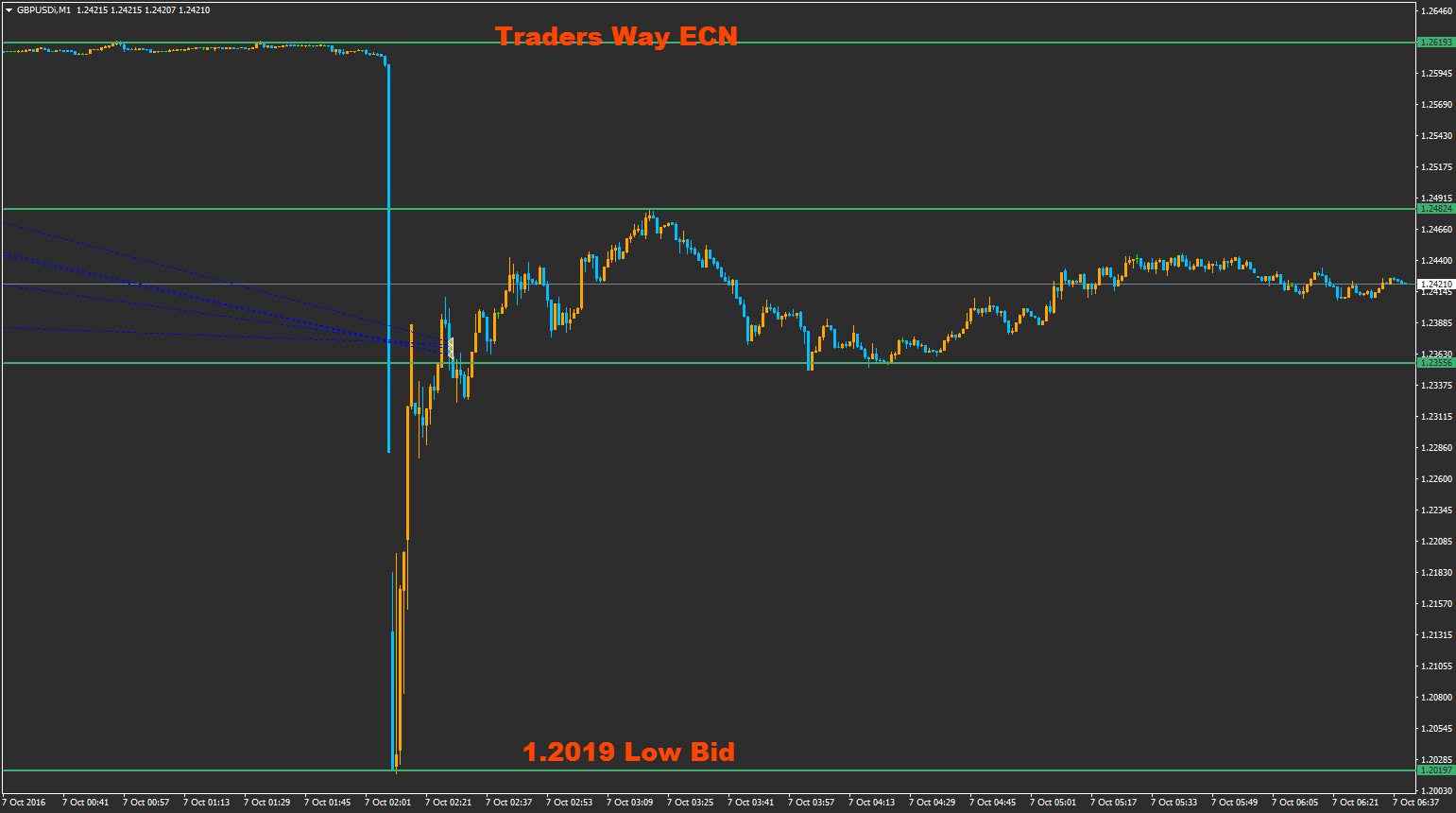 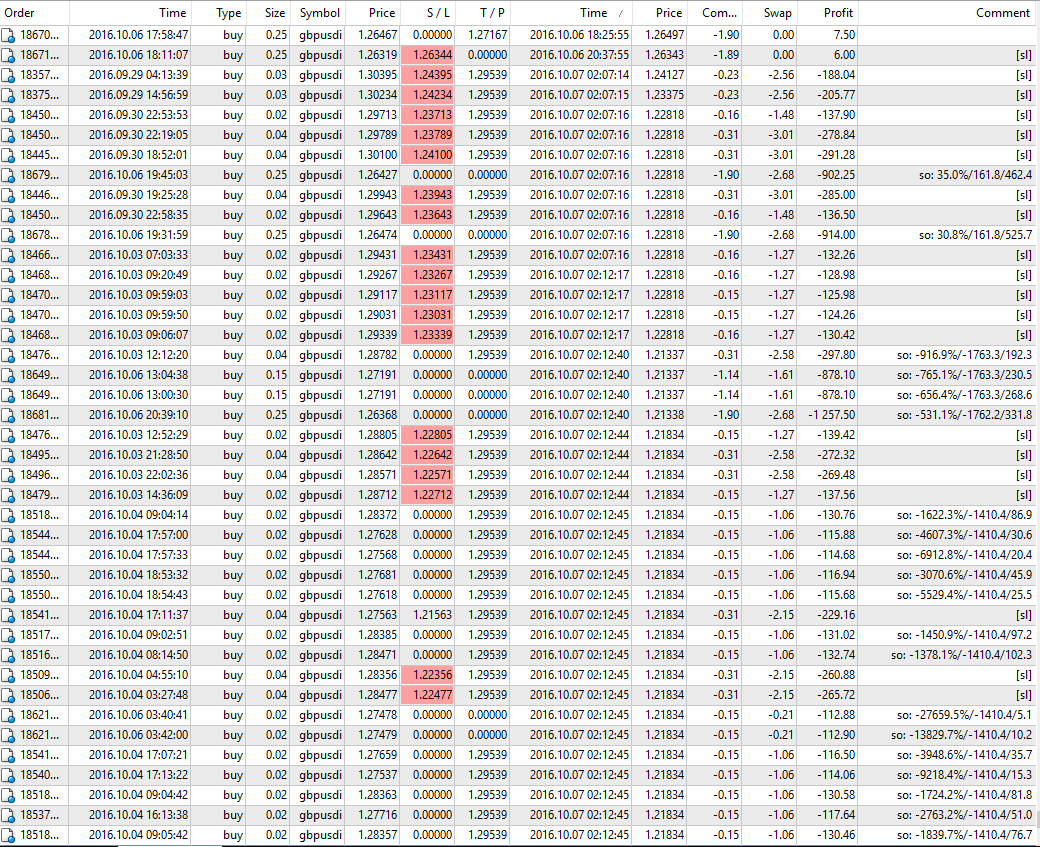 xgavinc
Oct 07 2016 at 08:50
Member Since May 11, 2011   235 posts
Yup, happened all over. I took an 84% knock, refunded before margin call. The Jury is still out on exactly what caused it, speculation is human or server error (I'm not convinced a human can cause that), other suggestions are uncertainty from Brexit.

I'm putting it behind me, concentrating on recovery. Closed GBPUSD and USDJPY (won't be trading these anymore, too uncertain, when Brexit is finalized I will open those charts again).
For every loss there should be at least an equal and opposite profit.
Quote Message Report 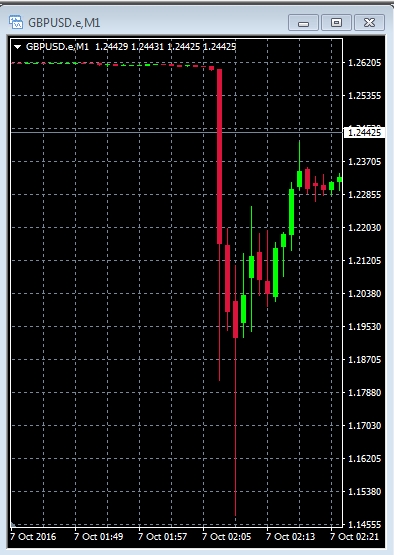 upandgo, is that Instant Execution account? if not, they are seriously misquoting, if it is, it's normal.
For every loss there should be at least an equal and opposite profit.
Quote Message Report

upandgo, is that Instant Execution account? if not, they are seriously misquoting, if it is, it's normal.

RoboForex ECN
They always do such spikes...((
Which i don't see at other brokers
Quote Message Report

Open in a full screen
What goes up, must go down
Quote Message Report

exnessdubai
Oct 07 2016 at 10:37
Member Since Sep 25, 2016   8 posts
iam new ,is there any news for this crash?any econamic data released/please inform the reason at that time.i thought that time is safe for scalp.please advice.
Quote Message Report

argreen
Oct 07 2016 at 10:40
Member Since Feb 13, 2013   48 posts
Trying to shed light on the GBP moves overnight will be extremely difficult in the current climate, with the wide variety of trading platforms leaving all markets open to moves such as this in a community now heavily populated with machine based trading. Some have alluded to comments made by French president Hollande that the UK is facing a ‘hard Brexit’ as a potential catalyst for the move, but going through at a time when liquidity is at its weakest will have conspiracy theorists looking to market manipulation, and a fat finger trade also in the reasoning. All of this is academic now as the London market picks up the pieces, but in the 4-5 hours, we have seen Cable balancing out in the 1.2350-1.2480 range, with EUR/GBP hovering above and hold off .8900. The cross rate highs are largely accepted to have been a little shy of .9300 by consensus, but the spot rate has the more official platforms quoting the low 1.2000’s and 1.1840-45 as the lows trade. Looking ahead, we doubt the UK industrial and manufacturing production numbers will have too much impact on GBP this morning, and perhaps again after US payrolls, but we can expect to see any major moves in Cable – which will likely be the move active rate today - contained towards 1.2000 on the downside, while 1.2600-20 may cap initially higher up.
What goes up, must go down
Quote Message Report

I remember that moment, very big move. And many other I went through.
Still, i survive and make profit from that. Smart investors will win. 😀
I don't throw darts at a board – I bet on sure things.
Quote Message Report

fx4btc posted:
I have a slippage of 1288 pips Total trading GBPUSD . And this is just on 1 account at Tradersway. I will document more accounts through out this weekend.

The sad part about all of this is that not even the brokers are safe from these types of moves as they are the ones who are really taking the 'risk'. This is exactly what happened before with the black swan event.
@GJscalper for more information
Quote Message Report

It's telling you something.....
Quote Message Report

I knew this would happen before Brexit 😄 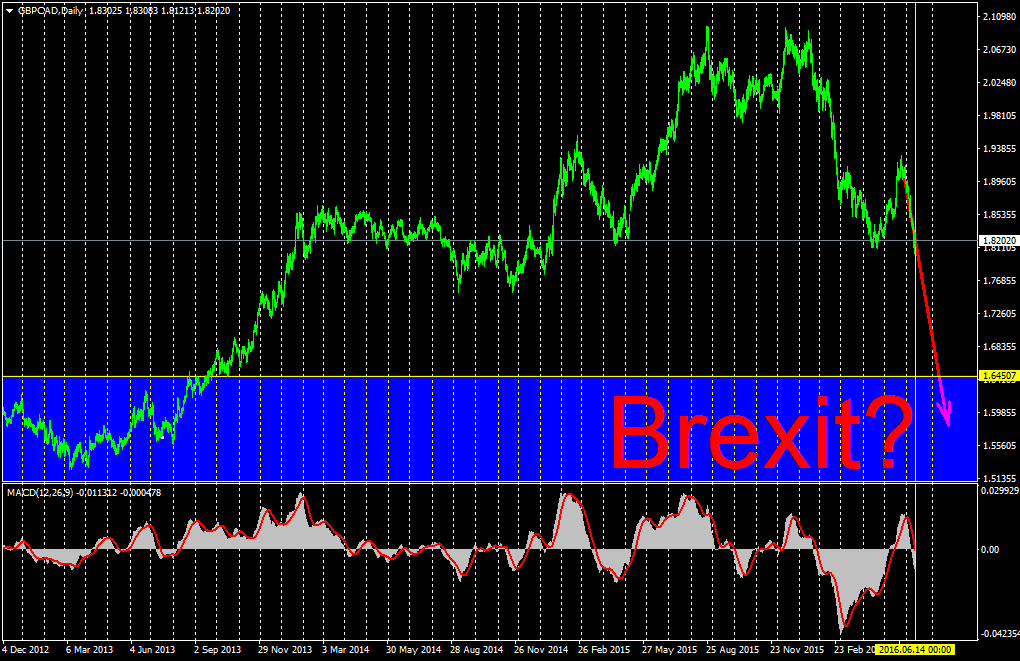