The user has made his strategy private.

michaelkim posted:
😄Yes, Yes, We made another good profits this week again.
I love Hybride EA signal. So happy 😄😄 😄

Thanks sir,I am happy that you like the signal and hope you will follow for an long time.Remember the trading is nog for short term,but we go for long term profit.We are also almost at the 200% profit in 16 weeks,my goal for this year will be 1000-1100% profit just like last year.

I hope you all had a great weekend, I had a great weekend and I am ready for the new trade week. The dangerous news has been, and the robot has avoided the news very well.We shall see what the new week will bring us.Sorry for the people who ask me all questions, I will answer them all now.And the new followers I wish you welcome to my signal.Lets do it together,and do not forget patience is the key for Forex.A common question from all of you is,the minimum balance needed for my signal that is $400-500,which is on the safe side.

I keep still Positive on my account last 2.5 months. How? I withdraw every time Hybrid EA makes money. 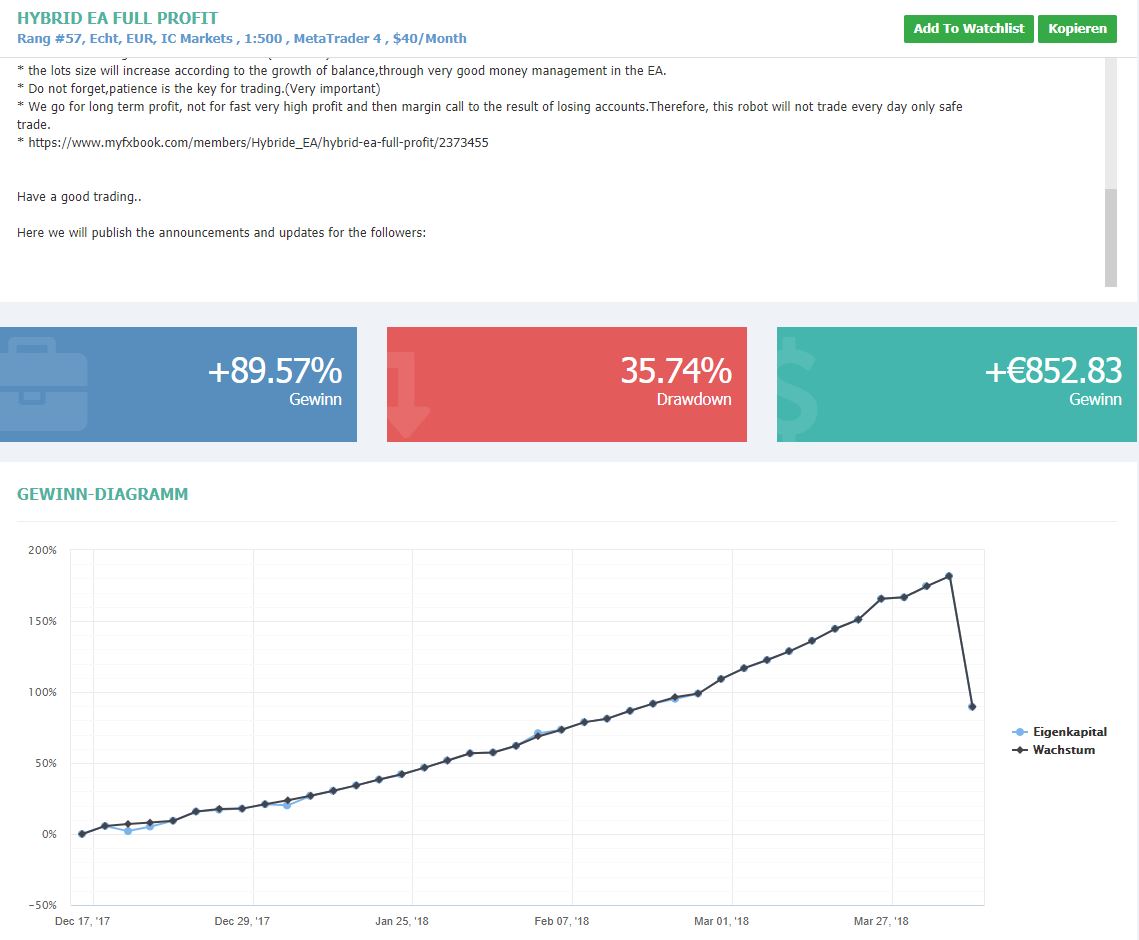 If you aim at nothing you will hit it every time.
Quote Message Report

Puceslinky
Apr 12 2018 at 06:49
Member Since Feb 08, 2018   6 posts
So i have a couple questions and perhaps suggestions after this stop-loss event. I have been following for a little over a month so yea it hurt today. No, I am not an experienced trader. Some of this I have sent mail and havent received response yet although I do understand your busy, but maybe this will spark discussion and answer questions for others. No offence meant by any of the following.

First, I was wondering about limiting the amount of trades per pair. Is there a limit? If not, maybe should think about it. If so perhaps better to limit on a pair running positive in case of pull back like we saw today with GBP/cad.

Second, I thought there was a trailing stop loss. There were 4 trades trades out on GBP/ cad with all four in the profit by a lot. When 5th trade came out the pullback started..... but was allowed to run all the way out into all negative. Why didnt the 'trailing stoploss' not catch it while we were still positive? This also speaks to perhaps more limiting on the amount of trades per pair especially while going fast positive as there is sure to be a pullback.

Third, I wonder why the 35% stoploss affects other traded pairs other than the offending pair? Would it not make sense to set a lower stoploss on each individual pair? That way if one was going bad it wouldnt close the other pair before it had a chance to go positive.

You did write to me about your EA and said it has hit the 35% stop loss once in the past four years....I hope thats the truth and that I just had terrible luck to have hit it so soon after following......

I do perhaps have a few other questions/concerns I may bring up later but these are my biggest. Thanks for your honest reply.