Sign In Sign Up
Calendar
Sentiment
Calculators
To use chat, please login.
Back to contacts New Message
System User's Page

aeronthomas (aeronthomas)
Jun 08 2016 at 08:52
Member Since Dec 04, 2010   1557 posts
were all those losses caused by the spike (i.e. fat finger)? I wonder if this account will be turned on during Brexit vote, SNB did well for this account but wiped out the IC markets account since deleted. If pound drops 20% as some pundits predict wonder if similar false ticks come though and it's another black swan event.

vladrac posted:
It would be pure insanity if not.

500k is a mere drop in the ocean pal. We are trading a 5+ tril market here, I know accounts well in the millions with mt4 brokers, so keep wearing your tinfoil hat.

vladrac posted:
It would be pure insanity if not.

if it was just on synergy I would agree, as we know all the Doug Price systems were scams on Synergy, however I do remember the other account for this system was on Ic Markets. However yes strange not to have made large withdrawals to protect this account's earnings... However Vlad you yourself have been able to mod this EA to make it more profitable from previous posts I believe?

I trade the same logic and it wins 80% if you have big enough SLs and you are not just blindly entering at fixed intervals (5min, 15min) or when there's no fundamentals behind it.

Understand the basics...this EA is based on KT channel BO, at 6am the channel was what? 5-10pip large? Any little bump would be a BO, but, trading after a 180move that was caused by pure GBP Brexit insanity that retracted in the next 1min bar over 70pips and 5min later another 30pips, just because your Keltner Channel cannot react properly to such a move, its at minimal stupid.

Forget about using this EA as it is. Do yourself a favor.

Find an edge and trade it
Quote Message Report

vocasla
Jun 22 2016 at 06:36
Member Since Aug 25, 2012   35 posts
This post may be challenged but there appears circumstantial evidence that this system may be decaying at a predictably constant rate: 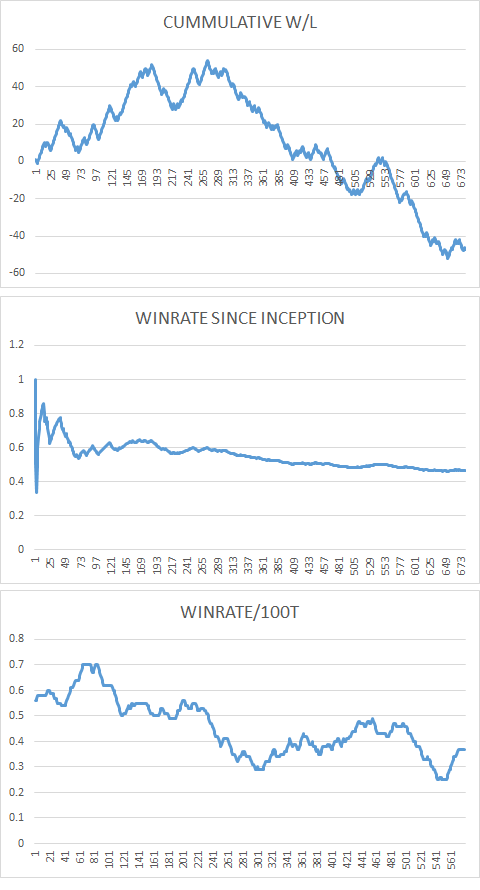 Im writing about my experiences, so yours can be different ;)
Quote Message Report
Please login to comment .