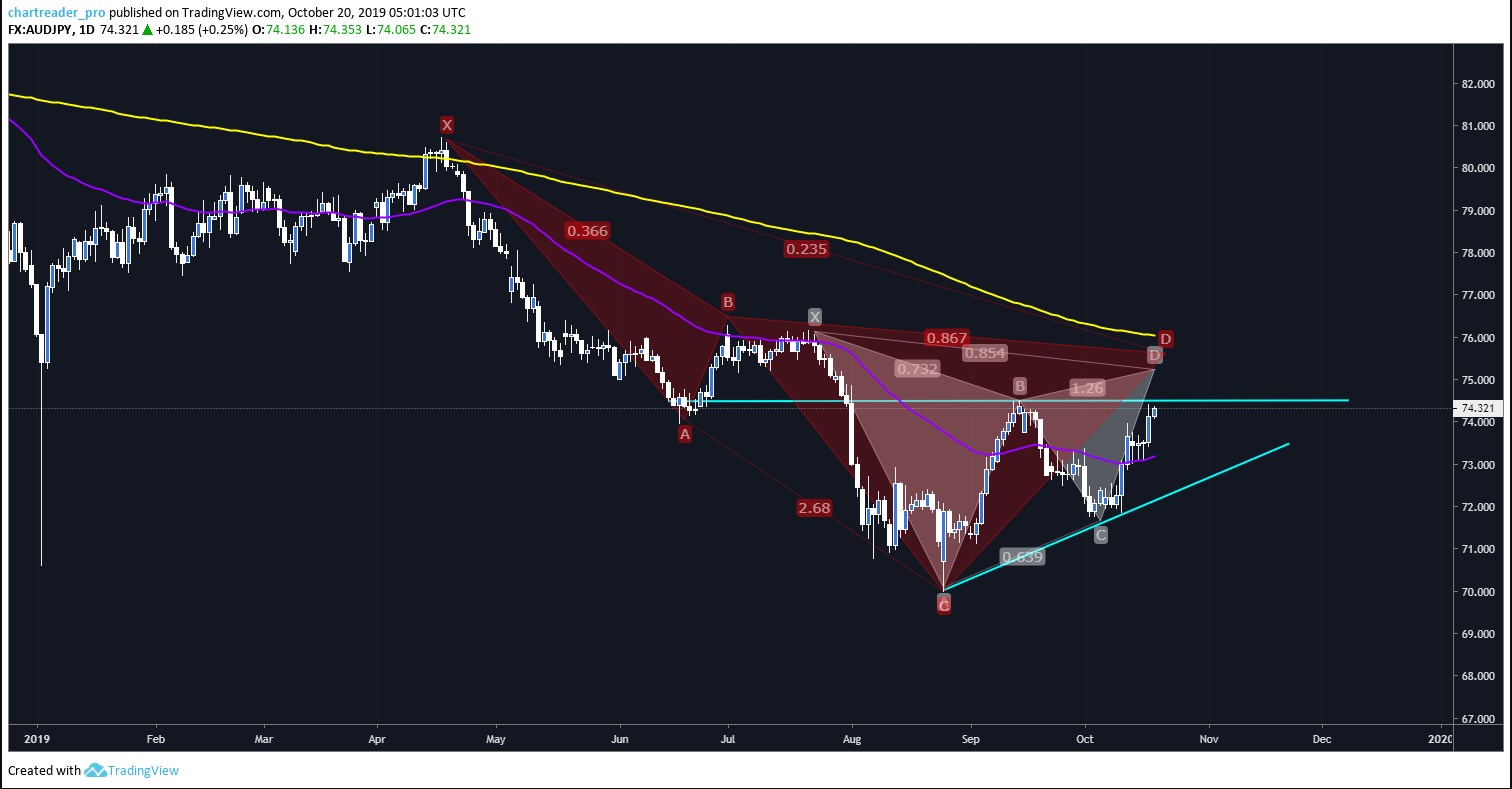 While the markets were focusing on Brexit Vote in the UK Parliament, CB Governors continue to send “easing in monetary policies” messages via the IMF and World Bank’s 2019 Fall Annual Meetings of finance ministers and bank governors in Washington.

Asked if securing a Brexit transition meant the BoE would resume raising rates, Carney said: “Not necessarily. I’m not going to pre-commit, there is a lot of contingencies there.”

He said the IMF had stressed the precarious nature of the world economy, which has prompted other central banks including the U.S. Federal Reserve and the European Central Bank to provide more stimulus.

The Bank of Japan will “certainly” reduce short- to medium-term interest rates if it needed to ease monetary policy, Governor Haruhiko Kuroda said, suggesting that deepening negative rates will be the primary tool to fight to heighten overseas risks.

“If we need further easing of monetary conditions, we would certainly reduce short- to medium-term interest rates. But we don’t want to reduce super-long interest rates,”

Considering that other major CBs are planning to increase their easing policies – more rate cuts, asset purchases, etc. – the determining factor of the Japanese Yen’s position at this point is the Safe Haven phenomenon.

Keeping the Kuroda’s words in mind, let us take a look at the Asia-Pacific Crosses. 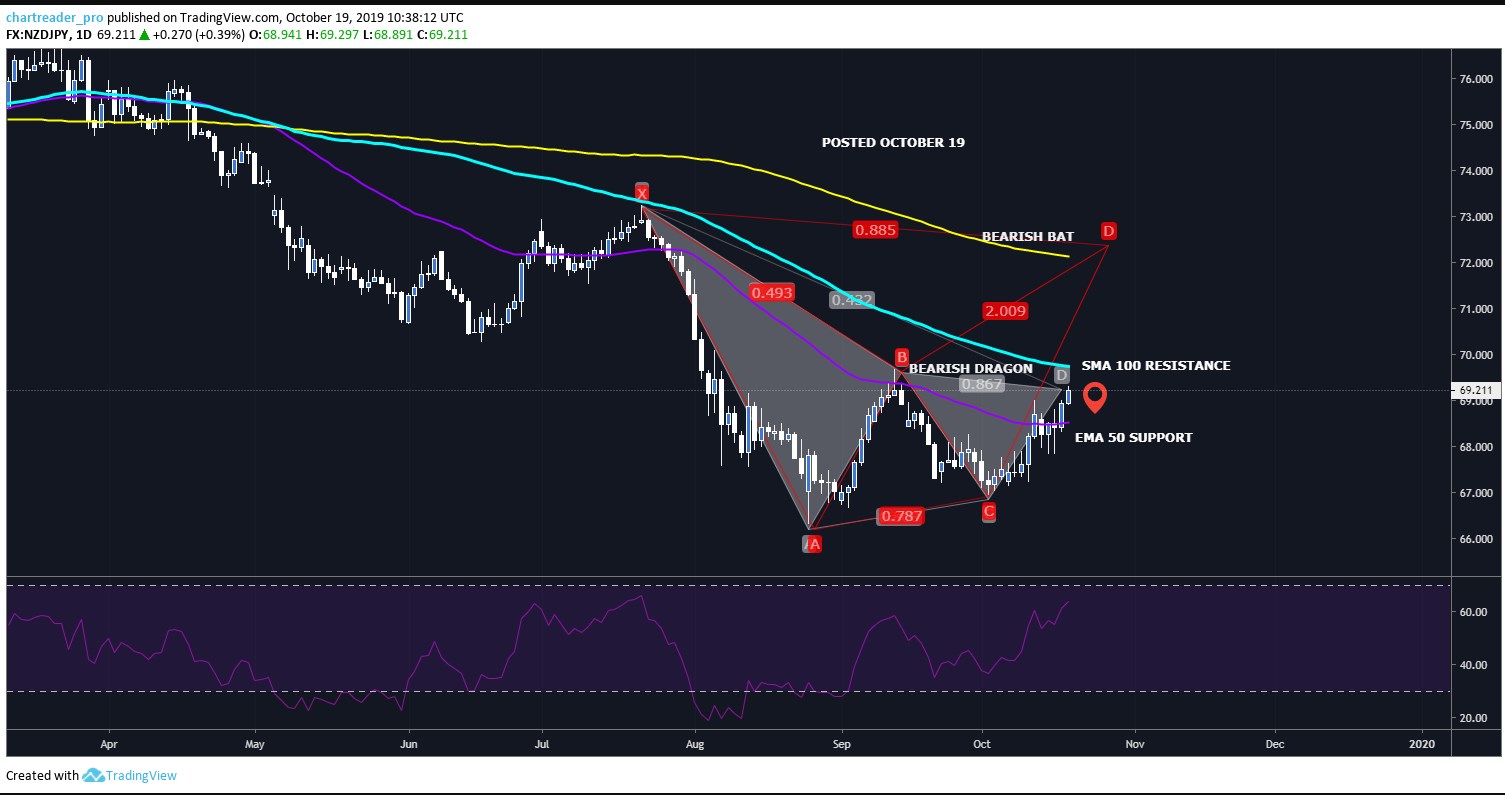 Bearish Dragon pattern is completed at 69.20 as seen on the above chart.

I have updated the Live Interactive H4 Chart. Following the Bearish Cypher pattern, the Bearish Shark Pattern would be completed at 69.35. This level can be used as a selling opportunity. However, the short-term bullish trend would remain unchanged as long as the price holds above 68.40.

All potential patterns and targets have been mentioned on the Live Interactive Charts.

The big picture is similar to the NZDJPY pair. The price closed above EMA50 at 74.32.

EMA 50 support is 73.43 and the short-term bullish trend would remain unchanged as long as the price holds above the EMA 50 support.

We see two major reversal patterns – Bearish Gartley at 75.20 and Bearish Swan at 75.56- in the Dail Chart.

By the guidance of the harmonic patterns in the H4 chart, we can say that the price must break and close above 74.60 to continue its upward move.

Weak Euro.
ECB Monetary Policy Decision on Dec 12th.
ECB is expected to keep its monetary policy unchanged. The wait-and-see policy and emphasis on financial supporting can be expected to continue.
UK General Elections and Brexit: General election poll projection claims Tories are set to win a 48-seat majority. The fact that the Conservative Party wins the elections with a majority, Boris Johnson is expected to activate the Brexit plan, which he had previously failed to approve in Parliament. And this will increase the possibility that Brexit will take place on January 30th.
Cheap Sterling and potential upside rooms in GBP Index confirm the bearish continuation in the EURGBP pair. 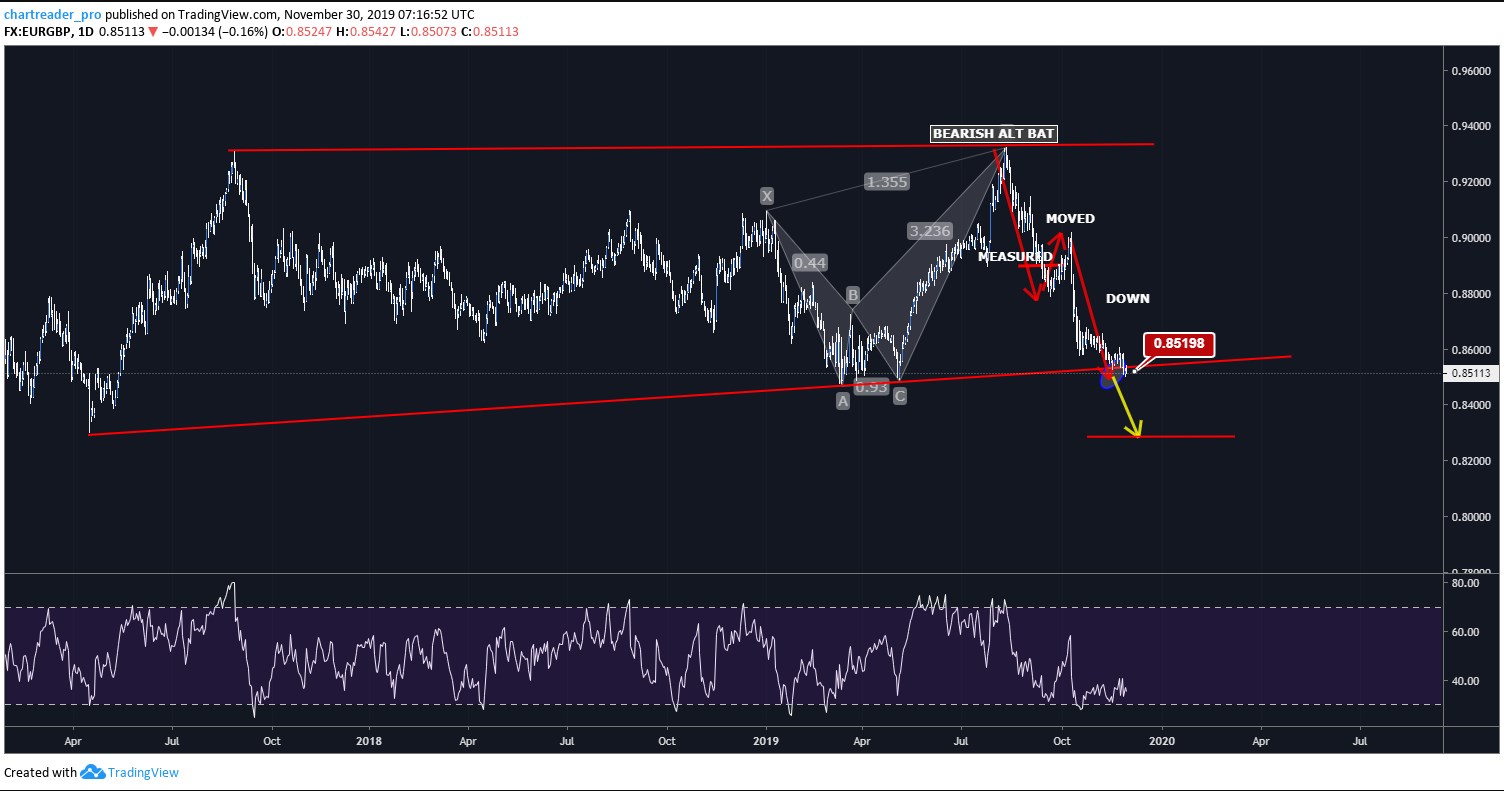 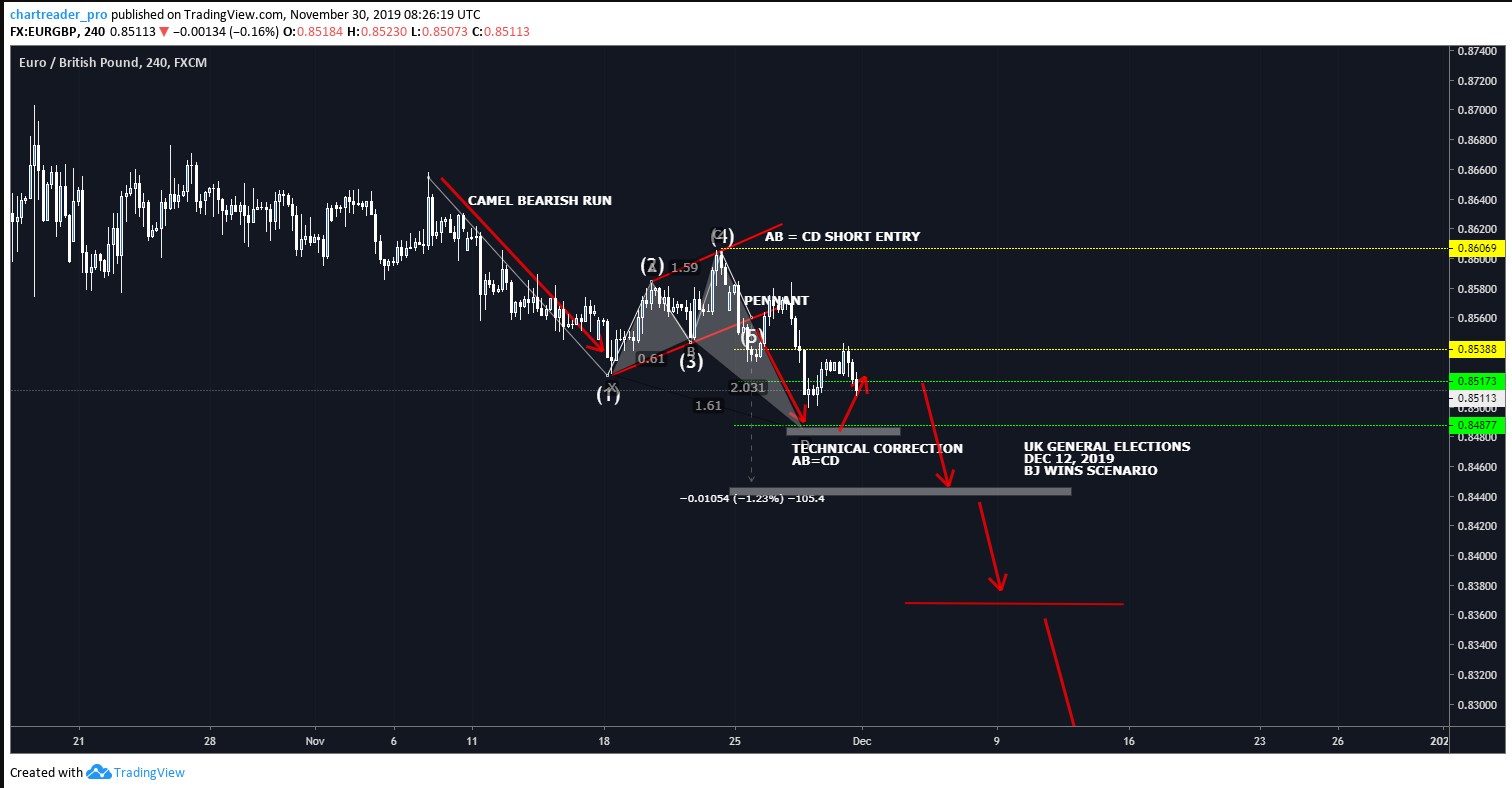 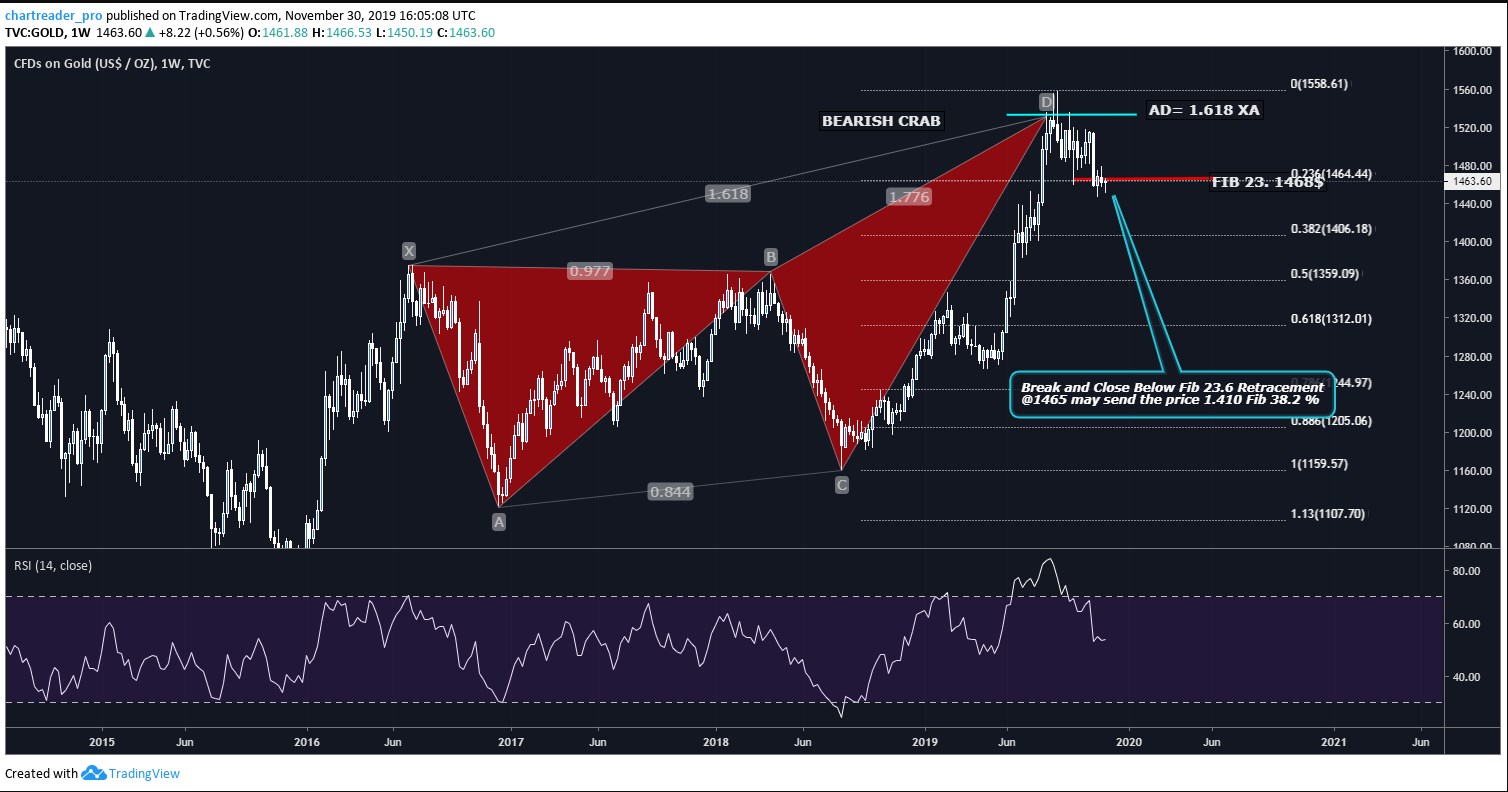 Reminder: This article is a shortened version of our Gold report which is prepared for our investors. It can not be used as a buy/sell signal.

December 12 – ECB decision: The ECB is not expected to make changes to its monetary policy. The wait-and-see policy and emphasis on financial support can be expected to continue. It will not have a significant impact on gold.

December 12 – UK elections: Polls suggest that the Conservative Party will win the UK elections by increasing the number of votes and the number of seats in Parliament. The fact that the Conservative Party wins the elections with a majority, Boris Johnson is expected to activate the Brexit plan, which he had previously failed to approve in Parliament. And this will increase the possibility that Brexit will take place on January 30th. This would help to eliminate a significant global uncertainty. GOLD NEGATIVE

But; After the realization of Brexit, the trade negotiations between the UK and the EU will create new uncertainties. GOLD POSITIVE

December 15 – US-China tariffs: The phase-1 agreement between the US and China, which is expected to be signed in mid-November, has not signed yet and tensions are rising due to the Hong Kong protests between the US and China. As the economic slowdown in China becomes more evident, China continues to take significant steps to ensure the agreement, as in the case of copyright, and to ensure that the agreement is achieved.

Some analysts think the signing of the deal could be by the end of the year.

As it is known, the US decided to impose a 10% import tax on the $ 156 billion consumers product imported from China but postponed it to 15 December. Whether these taxes will come into force will be the main determinant of the negotiations. If the US begins to impose these taxes, this could lead to a break in negotiations and serious disruption of risk appetite on a global scale.- GOLD POSITIVE –

The continuation of the process may even raise the expectations of further interest rates cuts from the Fed. This may trigger a new upward trend in Gold. – GOLD POSITIVE-

Although the global economy signals return from the bottom and major central banks do not signal additional easing policies, this outlook may be reversed by the failure of trade negotiations between the US and China. Therefore; The main determinants of gold prices will continue to be US-China developments in the near future.

On the weekly chart

• As seen on the chart, Gold is making its technical correction.

• As long as it stays above USD 1,376 in the long term, we consider the pullbacks as an opportunity to buy. Daily closing above 1508 would be the confirmation of Bullish trend continuation to add long positions. Targets are 1586 1600 & 1652. 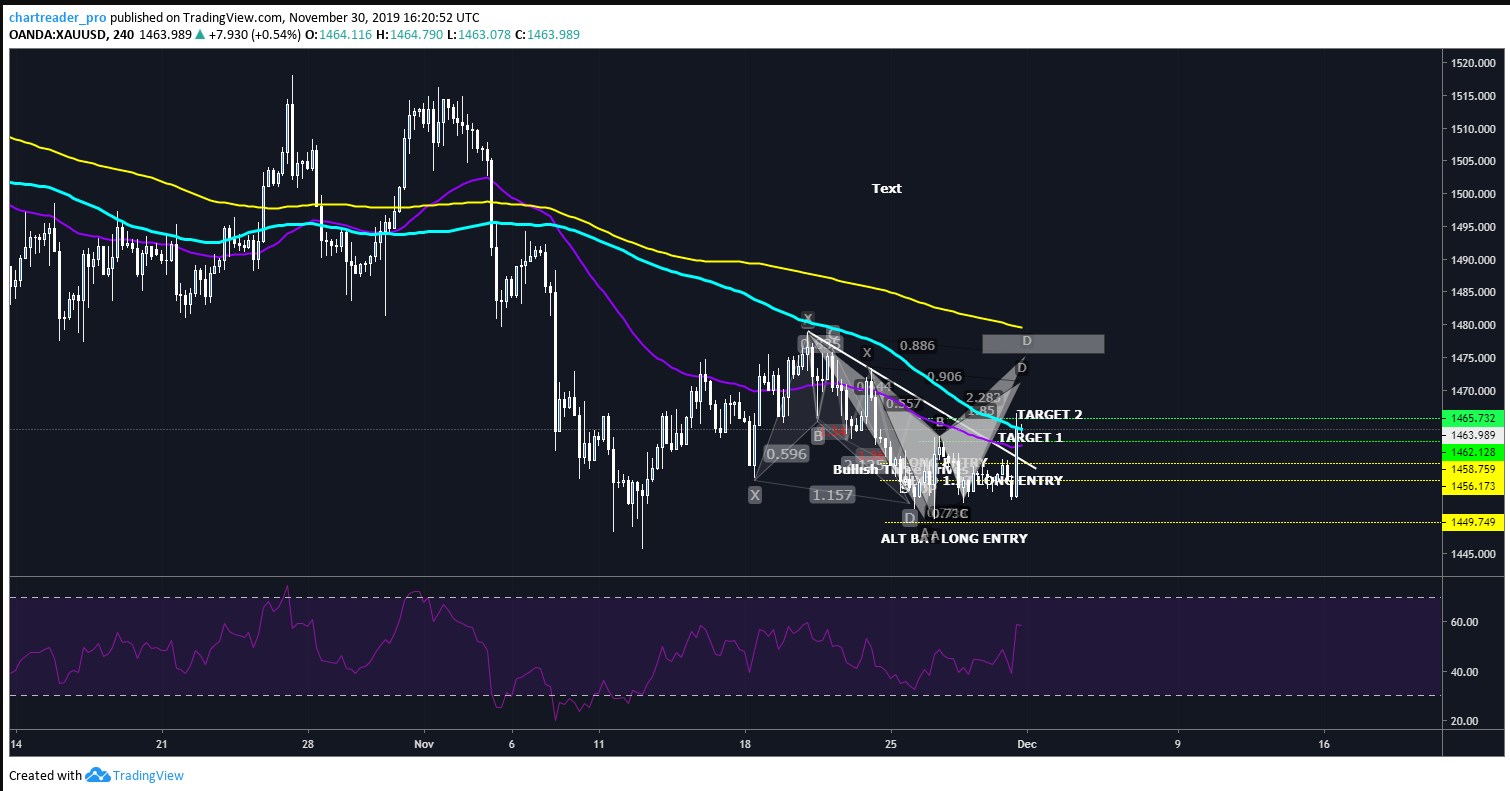 Two emerging harmonic patterns can be used as a selling opportunity.

Both of the Cycle Snipers with different deviations are heading south.

We wait for a signal from one of the Cycle Sniper Indicators and enter the short trade.


Check the below sample of two Cycle Sniper confirmation of DAX30 trade of yesterday:

beltvurm
Feb 17 at 04:54
Mitglied seit Dec 15, 2020   13 Posts
This is the right platform for traders from all over to share their thoughts and trading knowledge here. Keep sharing.