togr posted:
There are only 5 profitable days. It is too early to evaluate anything.

One can evaluate anything no matter the amount of 'time' which has passed. Sadly tgor, you should spend more time trading, than posting here at myfxbook. You are looking a bit like a troll.

Your answer has no valid point. You did just attack me.
I am not going to say I have like 50 profitable accounts and much more.
I am still saying that you have 5 profitable days which means nothing.

I understand. You can continue repeating your self like a broken record. However you may want to go post some place else and actually place some trades with in your accounts. Ohhhhhh.... I have noticed almost 95% of your accounts have not been updated in more than 5 months. That says a lot about you and your trading. Go run along and play now trollster. The big boys are trading in live accounts right now.

GJ, however likely the performance is to continue, 5 days is still a very small time for an investor to jump in on..
There are so many systems that have come and lasted 5 days positively and died.

Not to say this is the above, but it's still worth watching for a bit before jumping in and or understanding/knowing the logic behind it, whichever comes 1st?

I understand perfectly what it is you are saying. However, I just don't like people jumping into threads as he always does and leave comments which aren't productive. Instead opening the chart and looking at the trades and making some sort of analytical critic, either good or bad, he rather say what he said and it comes off as being rather childish.

rob559 posted:
high risk but interesting strategy,gj scalper would you mind to elaborate your trading plan a litle bit ?

Clearly I am using 'martingale money management' in order to seriously underweight the losses. However, simply reversing the orders and entering larger lot sizes isn't all that is done in order to get the results which you have pointed out. The over all 'trick' to making this work would be a traders 'expectancy' of how many consecutive losses he/she will encounter. I've traded long enough using the tick charts to know that the same exact formations which is revealed there, is revealed on the monthly tf. So what I decided to do about 4 months back is create a system which focuses on a fixed amount of 'formations' and study all the variations of such. ie. Have you ever notice the three different forms of the 'cup and handle' formation which can be seen. Primarily the 'handle' portion. Well by studying the 'variations' of formations, what I am able to do is enter positions PRIOR to the formations being 'confirmed'. So in the case of the cup and handle formation I would enter while the 'RIGHTSIDE' of the cup is forming. which is long before the handle even develops.
With that said, I have been able to create a system which doesn't have more than 3 straight losses. By creating a system as such, that allows me to use 'martingale money management' effectively as you pointed out. The hardest part is to stay controlled and not add on to the positions which you have open. All the market to run to your SL and than reverse, or allow the market to run to your tp, close your order and recalculate the next formation. Below is the same setup which my EA reveals. 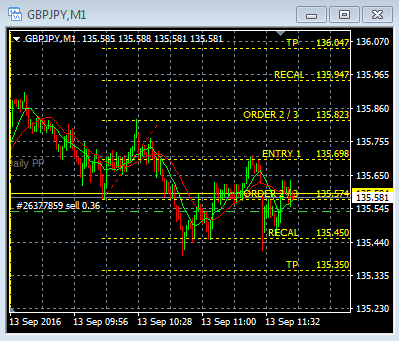 By looking at the picture above, you will notice the 0.0 and 100.00 fibs are marked by the levels called 'order 2/3'. The very first order of the sequence is marked by 'ENTRY 1'. Say my first order is a buy across the ENTRY 1. The stop loss would be a close at or below 135.574 on 1m in which I would close the buy, enter a sell for a lot size x times larger than the previous order. That would be order number 2 within the sequence. Say the price than reverses back to the buy side, which would then be a long once the price closes at or above 135.823 on 1m. I than close the short (order number 2) and enter back in to the long (order number 3) for x lot size larger than the previous. Should that one fail, I would then take the final order which would be a short at 135.574 and tp at 135.350

So what you see is that everything is predetermined depending on the formation which is being traded. Of course I could lower my risk 10x by using the following money management.

Thank you rob. I am doing this for #TeamMartingale

victor (rubionfunds)
Sep 14 2016 at 11:09
Mitglied seit Apr 13, 2010   83 Posts
Although i find @GJscalper explanation of this martingale method confusing, I believe this system holds strong potential if its applied to a large balance account traded with more 'reasonable' lot sizes.

rubionfunds posted:
Although i find @GJscalper explanation of this martingale method confusing, I believe this system holds strong potential if its applied to a large balance account traded with more 'reasonable' lot sizes.

The lot size will depend on the person using it. I can decide to have a max drawdown of 3% and the only thing that will change will be the lot sizes of the 4 orders. The system remains exactly the same.

You can disable notifications at any time from your browser.
Weiter