The XRPUSD pair is falling along with the rest of the cryptocurrency market within a wide downward channel, reaching its lowest level since last March, around 0.4682 yesterday.

The pressure on the sector is still associated with the tightening of the monetary policy of the US Federal Reserve, which strengthens the position of the US currency compared to alternative assets. Also, experts note that due to the arrival of many institutional investors in digital assets, their correlation with the stock market has increased, and the fall of the latter over the past month and a half has harmed cryptocurrencies. As for XRP itself, the legal proceedings between Ripple and the US Securities and Exchange Commission (SEC) are putting additional pressure on the token. The process continues to drag out, and most experts expect it will be completed only next year, although the chances of a faster resolution of the situation remain. In this regard, the survey conducted by Finder among the leading experts in the cryptocurrency market is interesting. According to analysts, if Ripple wins in court by the end of the year, the token will be able to reach 2.55 dollars, and otherwise, it will restore part of the lost positions but will not rise above 0.68 dollars. 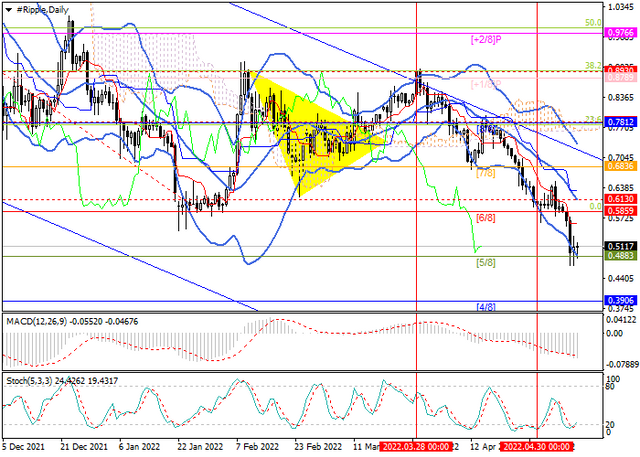 The price is testing 0.4883 (Murrey [5/8]). If it consolidates below it, the quotes may fall to 0.3906 (Murrey [4/8]). The key 'bullish' level is 0.6130 (the middle line of Bollinger bands). Its breakout allows growth to 0.6836 (Murrey [7/8], the upper limit of the downward channel) or 0.7812 (Murrey [8/8], Fibonacci correction 23.6%). The downward reversal of Bollinger bands and the increase in the MACD histogram in the negative zone indicate the continuation of the downward trend, but the exit of Stochastic from the oversold zone does not exclude corrective growth.