Pieslēgties Sign Up
Calendar
Apskats
Calculators
To use chat, please login.
Back to contacts new message
Would you like to receive premium offers (available to Myfxbook clients only) to your email?
You can unsubscribe from these emails at any time through the unsubscribe link in the email or in your settings area, 'Messages' tab.

FFAM
Mar 08 2016 at 15:10
Biedrs kopš Sep 28, 2015   8 ieraksti
What surprised regulator it is the fact that a licensed broker wiped account and did not sent a statement. Probably it will deal with the Cypriot regulator and with major companies TOPFX. How long it will take, I do not know.

MaxFX did not refund me all my initial deposits.


I advise all to be Careful


We went through our records, it seems we refunded your initial deposits entirely on 03/03, 04/03 and 7/03 where your entire initial deposit was met. Infact you were not charged a cent, all your funds were returned to you.

All documentation and relevant proof was sent to you. Claiming we did not refund you is a false statement, please refrain staining a perfectly fair broker because you were caught cheating.

And finaly how it is possible that an regulated broker don't send any statement after acccount disactivation? How can I justify to the IRS that I have not gained or lost money from this trading account without a statement?

In four year of trading is the first time that I saw something like this, in a real contest and with myfxbook sponsoring.

FFAM posted:
What surprised regulator it is the fact that a licensed broker wiped account and did not sent a statement. Probably it will deal with the Cypriot regulator and with major companies TOPFX. How long it will take, I do not know.

Good luck mate , please keep us posted . Look like more than one contestant have their account blocked with initial deposit refund only .

Which king of broker during NO NEWS can have a slippage and this kind of execution?

This is the account of bartolj during MAXFX Live Contest.

Good luck to all!
Pielikumi: 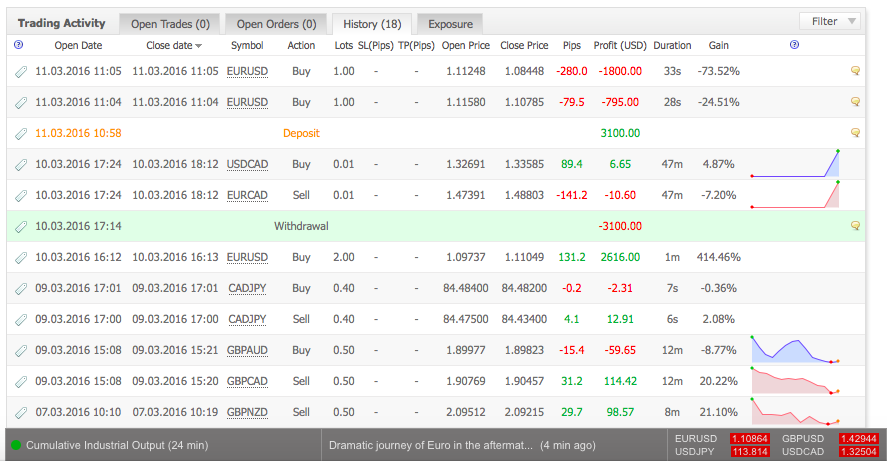 tukok
Mar 12 2016 at 10:00
Biedrs kopš Nov 08, 2015   1 ieraksti
The amount of ignorance is overwhelming. This broker clearly has lagging quotes and issues with liquidity during event times. Many of you have engaged in latency arbitrage where you check the real prices from other broker and leverage the shit out of your 1 min trades thinking how smart you are and returning astronomical profits without risk.

Not to defend MAXFX anyway, just surprised at the amount of denial here. They also voided my trades yesterday (actually they didnt void the trades but made a random manual EURUSD buy order with made up quotes HAHA :D). In any case I compared their quotes to my main brokers, and indeed I also benefited from their lagging quotes, however, I didnt deliberately exploit it and was generally exposed to market risk for a extended period of time. I made similar trades on my LMAX account for instance which were profitable. Trying to get some sense of this and asked them to compare their prices to real market prices and readjust the P/L accordingly.

Obviously, it tells a lot about the broker if you can do latency arbitrage and they really should have came up with legit explanation whats going on. I guess they wont, since thats how bucketshops operate (however would be really positively suprised if they did!). I kinda understand you guys also who feel overwhelmed about your profits being wiped off, Im sure theres alot people who made their profits without exploits. Any case the whole issue would be solved if everyone's trades were settled from the real prices, for instance comparing the prices to some established brokers or whatsoever.

Latviešu
©2021 Myfxbook Ltd. All Rights Reserved.
HIGH RISK WARNING: Foreign exchange trading carries a high level of risk that may not be suitable for all investors. Leverage creates additional risk and loss exposure. Before you decide to trade foreign exchange, carefully consider your investment objectives, experience level, and risk tolerance. You could lose some or all of your initial investment. Do not invest money that you cannot afford to lose. Educate yourself on the risks associated with foreign exchange trading, and seek advice from an independent financial or tax advisor if you have any questions. Any data and information is provided 'as is' solely for informational purposes, and is not intended for trading purposes or advice. Past performance is not indicative of future results.