SmartForexExpert (SFETrading)
Oct 03 2020 at 23:06
Uczestnik z May 11, 2020   87 postów
My 94% DD account was fully verified, but for some reason it became unverified and I don't know why. It is a Myfxbook issue. I can verify the account again if I could connect it again, but I no longer use that account and the account has been archived by IC Markets, so I no longer have access to it. I was giving updates publicly on other forums when I was running that account, and people who have been watching my accounts since a few years ago will know that I didn't make up the numbers. If I could upload a fake/modified statement then why wouldn't I just make the DD look better than 94%? 😂

I am confident that we will eventually get out of this DD. People who are skeptical about system will just miss out on the recovery and it's their loss. It's just the same as when the stock market dropped over 30% early in the pandemic, those who believed in the long term growth in stock market and continued to invest would have made back all the losses by now, but those who fled in panic missed out on the recovery altogether. Believe me, time will tell. 😉
Załączniki:

The market, the stats provider and of course the pandemic bla bla bla.

I will be curious whos fault it will be when the time will come where you will find yourself in front of a judge for investment fraud.

You asked why my old personal account is no longer verified and I told you the truth.

It is a fact that the market has not been favourable to momentum / price action based systems lately, and I admit that.

The point is that to survive in the Forex market in the long term, you need to have the patience to stick to a long term profitable strategy. My accounts may be losing now, but given enough time they will recover the losses, whereas most systems that look promising now (especially the martingale/grid systems) will crash and burn when the time comes. Time will prove my point and we shall wait and see. 😎

Also our signal is not a scam - we have never made up any fake numbers and we publish the results in real-time. People should do their homework before they join. I have already stated that the high risk account may reach 50-60% DD and the current DD is well within expectation. If they can't tolerate this level of risk then they can copy the low risk account which has max expect DD under 20%, but of course the expected return will also be less.

If people are not prepared to have any DD in investing/trading, then they should just put their money in the bank and continue their normal jobs. 😉

But our system is only 6 months old, so it's still too early to say it will not meet the target of 100%-200% gain in year. I still believe it is possible to achieve 100% growth in the next 6 months if the market becomes favourable again, especially with the US election coming up which should offer plenty of volatility and price movements.

Also, the current DD is still within expectation (which can reach up to 50-60% for the high risk account as I had mentioned before).

So I don't think it is fair to say that we are falsely advertising.

However, I must admit that we are not very good at making the numbers look pretty...because we don't hide our losses and we don't use martingale/grid systems to make the growth curve smooth to give people unrealistic expectations. 😭

Price actions base systems (SFE Price Action, SFE Attractor, SFE KISS and SFE Breakout) enter trades at strong resistance / support levels either looking for continuation of a strong move or a major reversal. Unfortunately in the last few months a lot of the movements fade after the initial move and don't continue in the original direction, or they pullback too far (and hence hit our SL) before they continuing in the original direction.

The 'Scalper' systems (SFE Night Scalper and SFE Stealth) have also suffered recently due to some unexpected moves in the quieter Asian hours.

Trend based systems (SFE Trend / SFE Gold fever (which can be use to trade Gold and Bitcoin) usually enter a trade on pullback looking for continuation in the original trend direction, but they have also been suffering lately in this choppy market.

The Stock Market EA has been performing the best so this year, but it has also had some losses lately due to the recent pullback in the stock market.

So overall all I can say is that the market really hasn't been favourable to our systems lately, but it is simply impossible for the market to continue behaving the way it has been in the past few months forever. Eventually the favourable price actions will return and that's when all the grid and martingale systems will crash, and our system will make massive gains and recover all the losses.

Agazon posted:
It seems to me that the matter is in the settings of your system. Something goes wrong with you. What signals is your EA tuned to? how does op define entry and exit points?

He is buying tops and selling bottoms.

Agazon posted:
It seems to me that the matter is in the settings of your system. Something goes wrong with you. What signals is your EA tuned to? how does op define entry and exit points?

He is buying tops and selling bottoms.

Yes there is some truth in that statement. Our price action based systems aim to capitalise on strong breakouts through significant support / resistance levels, and they can make massive gains when the conditions are right.

The current choppy market where a strong move nearly always retraces straight after the initial move, has been unfavourable to these systems - but their time will come eventually.

Our strategy works in the long term, and you need to be patient to wait for the right conditions to make profit.

We have just made 10% in one day and it demonstrates how the system can make significant gains in a short period, when the right conditions are met.

And it must be a coincidence that both of you were on Forex21's thread leaving favourable comments? 😂

Forex21 banned me just because I pointed out something not quite right with one of his screenshots. 😉 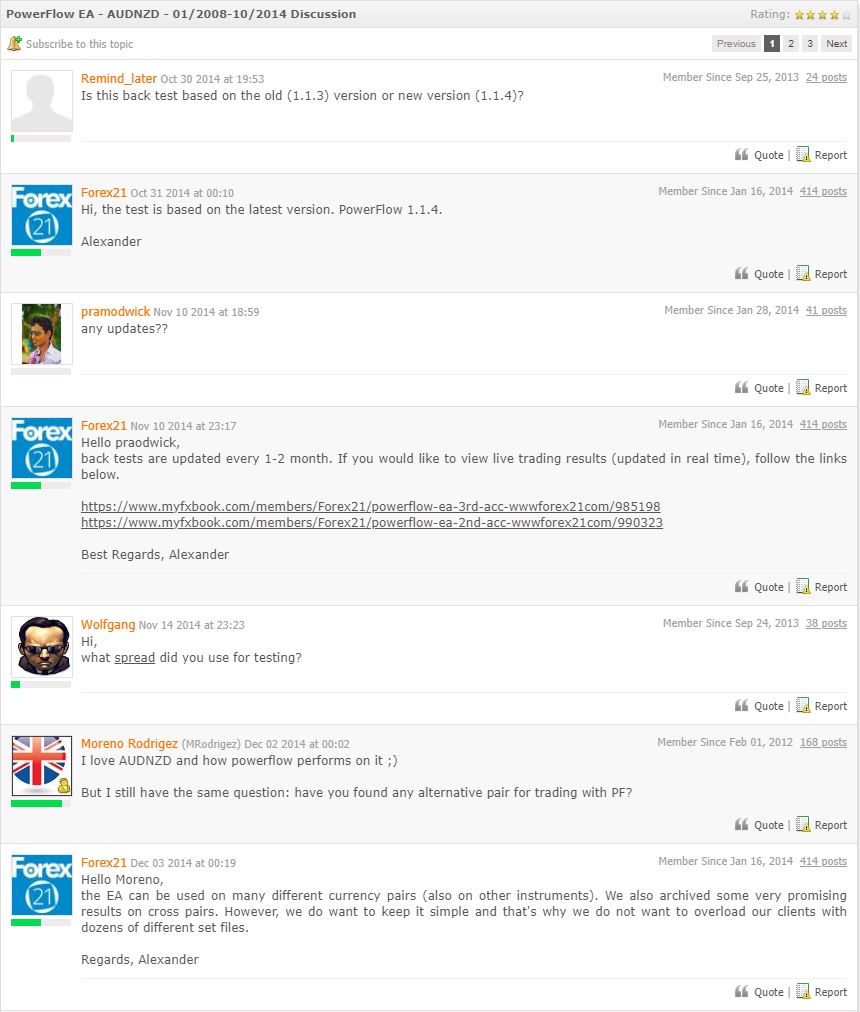 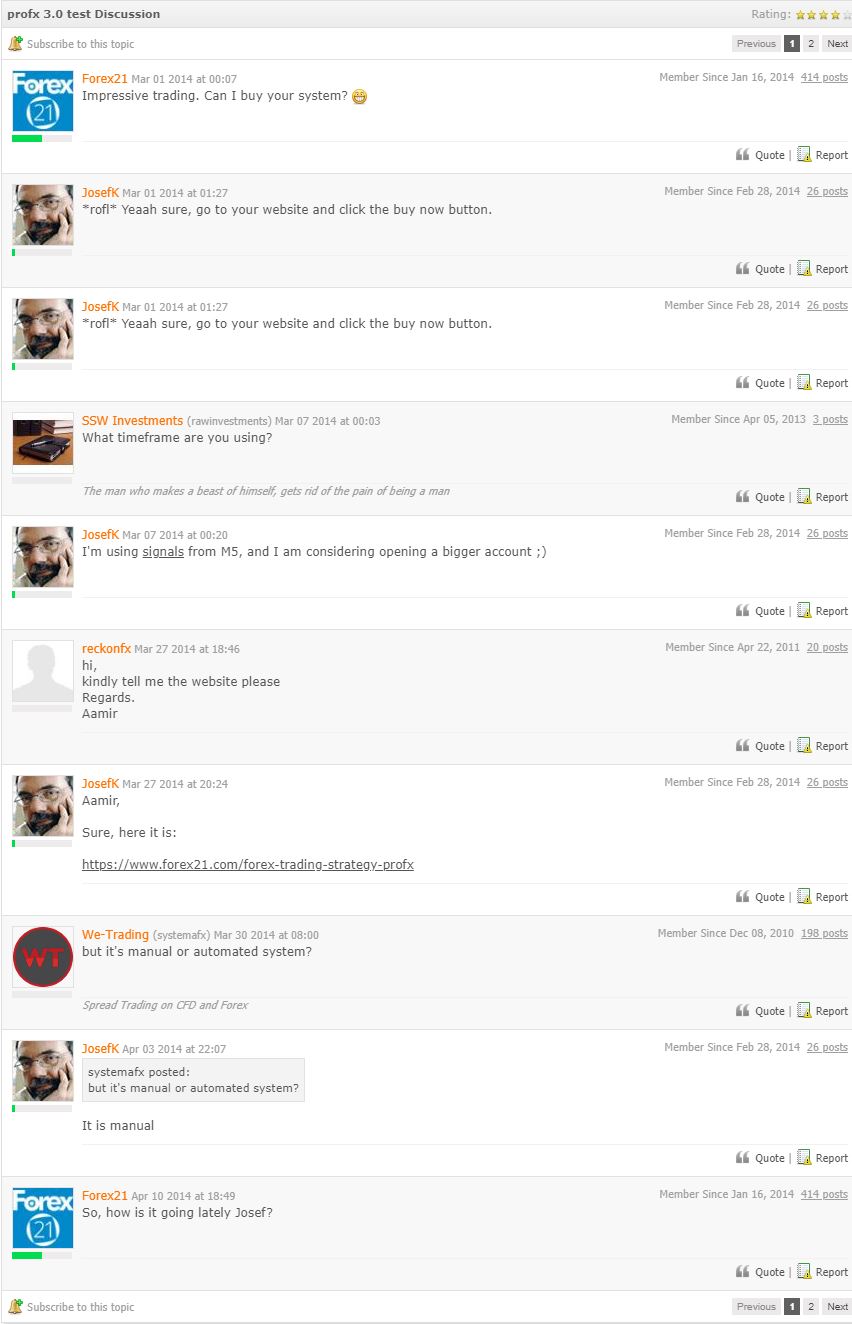 Forex21 banned me just because I pointed out something not quite right with one of his screenshots. 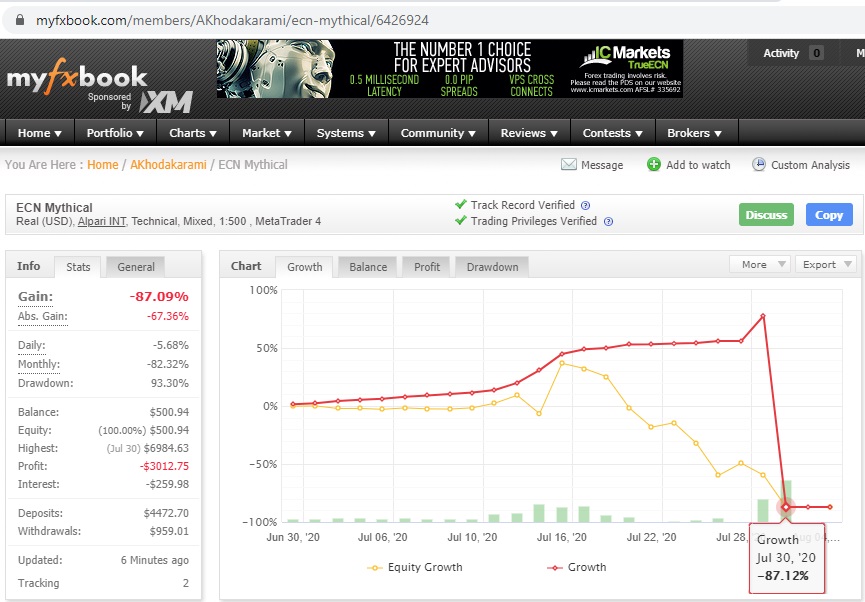 Super trading btw. PF of 1.10 is a great milestone for you.
Załączniki:

SmartForexExpert (SFETrading)
Dec 18 2020 at 10:46
Uczestnik z May 11, 2020   87 postów
Forex21 blocked me after I pointed out the Myfxbook account number in his screenshot didn't seem right because it should have 7 digits instead of 5.

I admit I accidentally posted the wrong image and I apologised for it. But unfortunately I could not modify my post as soon as I hit 'send' on Myfxbook. I would have removed the attachment if I could.

A Profit Factor of 1.10 after over a thousand trades is indeed a great milestone. Most systems trading with Real money can't even last more than a few hundred trades and still maintain a positive result. 😉

Chrissimmins
Dec 21 2020 at 12:24
Uczestnik z Oct 26, 2020   10 postów
I am an IC Markets user along with Fxview, both are giving me 500:1 leverage, which I see even you have used. But as much as I want to use such high leverage I am very apprehensive about going beyond 10:1. I am trading on micro lots on M30 and H1 charts, and keep my strategy simple, 5 and 10 crossovers. I want to grow my account further and for that I need help. In terms of how to spot the trades that I can use high leverage on, indicators, analysis tools that you all use. TIA.

SmartForexExpert (SFETrading)
Dec 21 2020 at 13:09
Uczestnik z May 11, 2020   87 postów
I think if you copy our Master account at 10% Risk you may be able to get away with using only around 10:1 leverage, but you will need a very large account to be able to generate any meaningful profit.

However, one thing to note is that our signal does not use anything close to the 1:500 leverage, it’s probably closer to 1:100-200 max. Also with our system the maximal loss on any single trade is capped at 3%, and the trades will be closed when their pre-defined SL is hit. It means that there is no risk of margin call, because if we get a string of losses, the lot size of future trades will become smaller as well (ie. the balance will decay exponentially rather than linearly with consecutive losses).

SFETrading posted:
However, one thing to note is that our signal does not use anything close to the 1:500 leverage, it’s probably closer to 1:100-200 max. Also with our system the maximal loss on any single trade is capped at 3%.

How do you explain those?
Załączniki:

Thanks for pointing it out because it seems like he actually changed the Risk Multiplier to 2 towards the end and I was not aware of it. As a subscriber he could change the Risk Multiplier setting anytime himself on the trade copying platform. He must have gone into revenge trading mode after some losses, increased the risk, had more losses and then gave up...had he continued to stick to our system he would be been back in positive territory by now.😞

I have made a comparison between the Master account (https://www.myfxbook.com/members/SFETrading/smart-forex-expert-signal-high/5817768) and the IC Markets Follower 3 account (https://www.myfxbook.com/members/SFETrading/ic-markets-follower-3-stopped/6732087) during the same period, and ranked the trades by most loss in %. As you can see, allowing for slippage and commission, the largest loss was only -3.22% on the Master account during the same period. 😄

SFETrading posted:
Also with our system the maximal loss on any single trade is capped at 3%, and the trades will be closed when their pre-defined SL.

3% max loss sounds like a great rule but useless when you let trades -22.61% run against you.

You can disable notifications at any time from your browser.
Kontynuować