Sign In Sign Up
Calendar
Sentiment
Calculators
To use chat, please login.
Back to contacts new message
Would you like to receive premium offers (available to Myfxbook clients only) to your email?
You can unsubscribe from these emails at any time through the unsubscribe link in the email or in your settings area, 'Messages' tab.

Firstly, we’d be grateful if you could modify your tone. Aggressive language will get us nowhere.
In answer to your review, we reiterate that the money was taken by the correspondent bank because the transaction was incorrectly executed i.e. the bank’s internal policy was responsible for the deduction. We did not take any money.

We now realise there has been an oversight at our end about this whole affair in that we did not inform you of the former agreement’s expiry. We apologise unreservedly.

We have already spoken with your client and explained the issue. As a gesture of goodwill, we decided, on this occasion, to reimburse the amount incurred by your client to make up for our oversight.
We hope that this will bring an end to this ongoing issue for you.

Many thanks for your positive review. Keep up the good work, and we will do likewise.

Many thanks for your positive review. Keep up the good work, and we will do likewise.

thanks .
its with mixt results no yet making profit
so what can i say
kind regards

axellenz
Jan 15 2020 at 15:24
Member Since Dec 13, 2018   3 posts
Fast and competent support! Payment for EU citizens can only be made using the Bitcoin workaround. But the instructions are great and for that you get a lot of bonus.

axellenz posted:
Fast and competent support! Payment for EU citizens can only be made using the Bitcoin workaround. But the instructions are great and for that you get a lot of bonus.

Hamid (hamidfx)
May 21 2020 at 04:41
Member Since Feb 18, 2012   1 posts
They manipulate their rules to scam you and take your money. Stay away from them
They scammed many clients when the oil price crashed on April 20 and took huge amounts of their clients against their own rules and then they manipulated rules to keep the clients money. Never doubt they are definitely market makers and took clients money.
They manipulated their rules many times in just 3 days and then started to justify their mistake by referring to those manipulated rules.
Based on their original rules regarding CFD’s which was existed from 2014 they must switch to new contract a day before expiration day. Which clearly was explained by an example for contract with expiration date on 16 Jan and it says:
“On 15 January, we switch from using the February 2014 quote to the March 2014 quote as the basis for the spot price, because the underlying February 2014 futures market expires on 16 January.”
But for some reason they didn’t switch on time and they continued with the May contract until April 20 at 21:08 when the price came to one cent and they faced the problem which was caused because they didn’t switch before market opening on April 20. Then they disabled trading on oil for almost 5 hours and then they found the best solution to get the clients money by using the swap because the amount was huge and they decided instead of taking responsibility of system error which gave wrong quote to keep the clients money and instead of normal time for opening market at 01:00 finally at 02:43 they opened market with June contract price with almost 27 hours delay and charged the clients with huge amount of swaps and then they acted like everything was ok and there was no issue
On April 21st they started manipulating their rules. First, I found they manipulated the rules by changing the switching date on example from 15 Jan to 17 Jan.
They didn’t stop it and again they manipulated the rules by changing the date from 17 Jan to “at the beginning of 16 Jan” and instead they postponed all expiry dates one day which for May contracts they changed the expiration date from April 20 to April 21 to cover the problem and by this manipulating they messed up every thing in all emails and in their news on the website and even here in their customer service answers to complaints the expiration date for May contract is April 20 but in the file which is manipulated the expiry date is April 21 and by this action they justified the delay.
When I asked them about the reason for the manipulation of their rules they answered :“we rephrased rules for better understanding” which is ridiculous because they changed the most important parts of rules that was the date and time for switching and it was clear and there was no need to rephrase it except to try to justify their mistake. I also explained that they couldn’t manipulate the rules after issue happened and then try to justify the problem by referring to manipulated rules and the reason, they couldn’t answer based on their rules was definitely their fault and their action was exactly scamming.
Again, I sent evidences and explained their action by changing date of expiration for CFD’s is not rephrasing and they answered: “Our CFDs are based on market contracts. The expiration day is the last day when the contract can be traded and it is always a business day. There couldn’t be any trading on Sunday (April 19), so it could not be the last trading day” and at the same time they sent another email to all clients to say they would switch to July contracts before market opening on May 4th which was Monday and it has the same condition which they are saying we couldn’t do it, because the day before April 20 was Sunday and it wasn’t a business day. So how are you doing it this time. Although all brokers did that before market opening and there is enough time between 23:59:59 of Friday April 17 when the market closed and at 01:00 on the next day when the market opened regardless of the last day being a business day or not like this time you had enough time from 23:59:59 on Friday April 17 to 01:00 April 20. I have all evidences recorded and I would attach them here if it was possible. 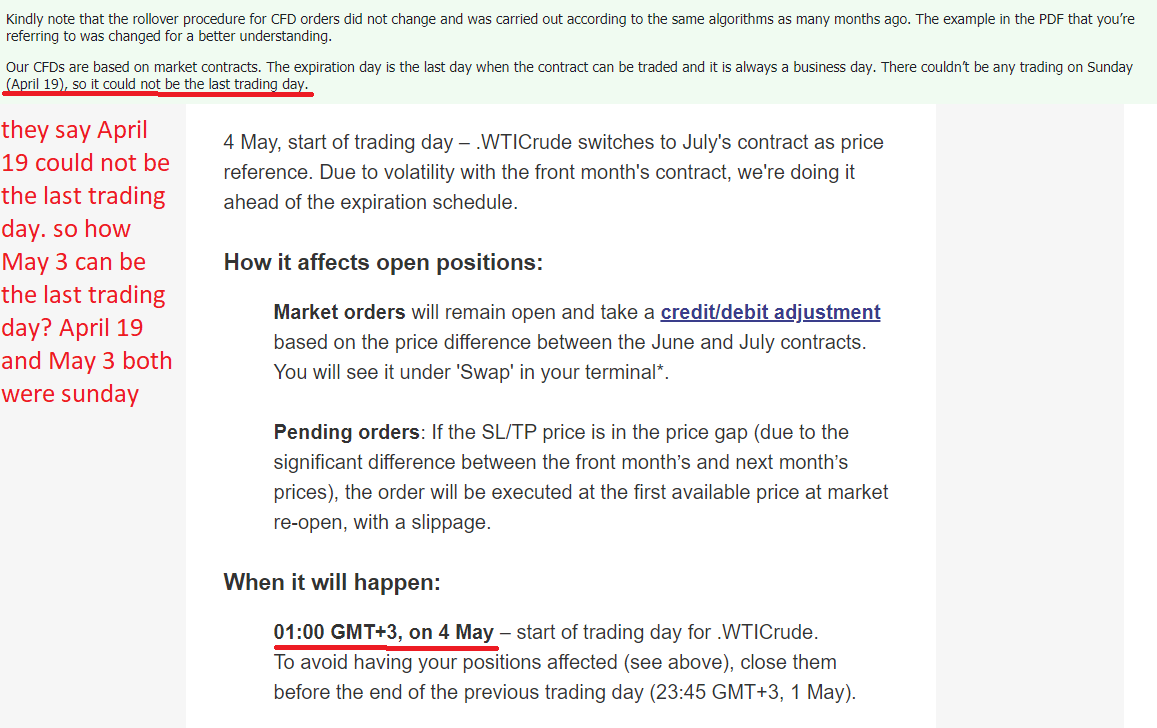 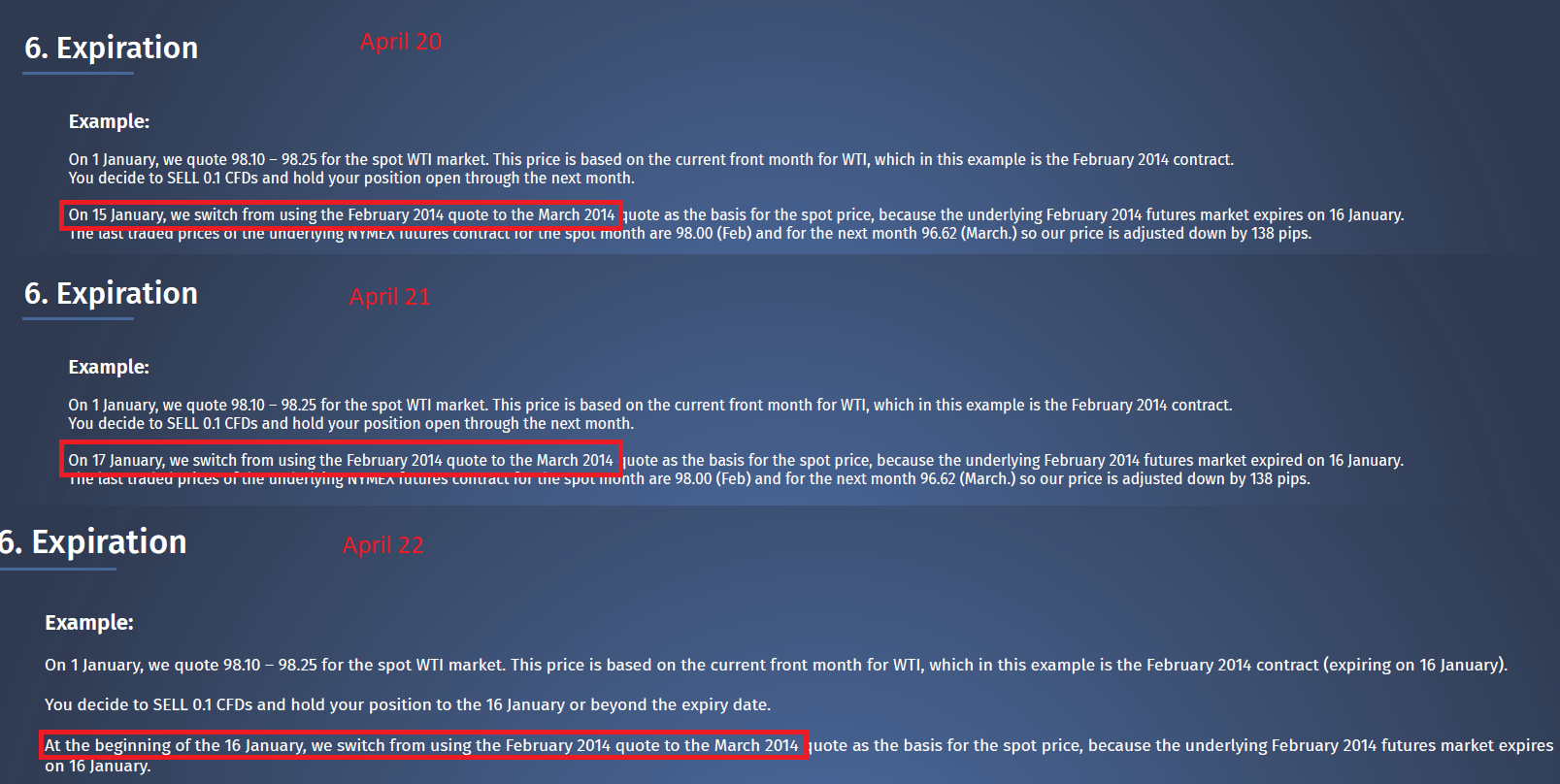 We have found you in our system and reviewed our lengthy correspondence.

All we can do here is reiterate our position: we reworded the information in our CFD Guide and site so clients could see clearer how the expiration worked. We realised that the examples we had used were from 2014, so we refreshed them, but the expiration rules DID NOT change. An even newer version of the CFD Guide will be released soon to reflect the launch of some new instruments.

From now on, we are sending out emails to remind our clients about the expiration dates. We are sure this will mitigate the misunderstanding caused at the switch from the May to June WTI contract.

To confirm, all of your trades were processed correctly and there was no ‘manipulation of the rules to scam our clients’. The trades were passed over onto the new contract EXACTLY as they are every month. Nothing has changed in this respect.

We hope our response will bring some closure to this matter.

Nemi
May 25 2020 at 16:38
Member Since Jun 21, 2016   1 posts
well first you cant make normal deposited from bank...
after BTC deposit youll pay 10% fee (and you must wait X hours) for deposit and as a kind of 'good faith'
they gave it those 10% to your acc as a bonus... but only for a month and then take it back.
But all this was piece of cake. I trade WTI in time when it drops to 0 which wasnt bad it was good actually
but these put swaps on every position which isnt weird but swaps was $2000 per 0.1 lot.
So i started saving my account every profit I made I cut piece of swap and when it started to look good
they came up with new high .... they put another swaps 2 weeks earlier just to 'protect clients' as they said....
easy money right (for them ofc). so if you considering trade with them, dont. Im glad they take alot of time making my MaM
account so my clients didnt send money to them.

Im sure that someday when someone will have a few hours of free time and know for example python. he or she take that time and
write script that will make shtloads of accounts on every review page so you can end like tiktok with 1 star.
So ppl can see on first look how bad this is.

There are so many things to address here.

Firstly, your claim that there is a 10% fee on BTC Deposits is incorrect – we have no fees on BTC deposits and conversions. Also, you claim that BTC deposits take 24 hours – again incorrect. They take as long as the blockchain confirmations, which are never that long.

Secondly, we offer a bonus to our clients with a view to give them a head start in tackling the forex market. We do not ‘take it back’ in a month as you claim. We recommend you read the T&Cs of the bonus which clearly state what you need to do to keep the bonus.

Thirdly, we have checked our records and can see that you received all of our emails regarding the WTI Crude price collapse. You should know by now that the WTI ‘swaps’ were NOT swaps, but adjustments to cancel out any profit/loss as the price feed switched from the May to the June contract. You cannot open a trade on the May contract and close on the June contract whilst keeping the same opening price. The adjustment simulates the closing and reopening of your trade.

Fourthly, as an EU citizen, you cannot use wire transfers directly. However, there are many payment providers you could have used that offer wire transfers.

English
©2021 Myfxbook Ltd. All Rights Reserved.
HIGH RISK WARNING: Foreign exchange trading carries a high level of risk that may not be suitable for all investors. Leverage creates additional risk and loss exposure. Before you decide to trade foreign exchange, carefully consider your investment objectives, experience level, and risk tolerance. You could lose some or all of your initial investment. Do not invest money that you cannot afford to lose. Educate yourself on the risks associated with foreign exchange trading, and seek advice from an independent financial or tax advisor if you have any questions. Any data and information is provided 'as is' solely for informational purposes, and is not intended for trading purposes or advice. Past performance is not indicative of future results.