fariwar posted:
ICMarkets is a real scam broker! STAY AWAY!!!

ICMarket was sending illegal/fiction prices for USDCHF during the news. Regarding all financial reports, including Bloomberg, USDCHF has never ever been on that price. The difference between actual price and ICMarkets price is over 2000pips!!!
You can see all my trade details here!

After 3 weeks of calling, several emails and promisses that they will adjust the trades to the right price, all they say was this:
&quot;Upon further review of your accounts, our trade desk have assessed that there are no pending adjustments on your accounts as the rates have been verified as correct by our liquidity providers and stopouts occurred correctly. During the SNB announcement, spreads were extremely wide, and as there was uncertainty by the banks on where to price the CHF pairs there was no liquidity as a result.&quot;

These 3 accounts lost all together over 14k and had same trades. They adjusted trades on 1 account with 740euro's (which is nothing if you look at the loss). But the most crazy thing is that they say the trades on the other 2 accounts don't need adjustments while they have been traded on the same price.

All they do is blame the liquidity providers which they chose by themselfs. When you don't know where to price a currency why do you just send fiction prices? and allow trades on those prices? Saxo just blocked tradings and did send real prices. On ICMarkets graph you can see USDCHF went down all to 0.04, which should mean: USD doesn't exist anymore.

This is just steeling money from traders by sending fictionary prices to MT4.

I'm now sending a letter to Australian Securities and Investments Commission (ASIC) to investigate this as ICMarkets is not taking this seriously.

I had a desire to work with them but then it disappeared. Thanks for the warning.

Irishmist
Jan 31 2015 at 14:03
Member Since Oct 20, 2013   136 posts
Fairwar the pirces are not fictional this shows how much you know about OTC derivatives & liquidity pools. In the SNB debacle as you may wish to call it the quoted prices on MT4 where stale meaning the prices showing on MT4 where not reflecting where the market really was as NO one in his right mind would even give you a quote and if they did moist probably it would have been 10% if not more between the bid and ask

You simply cant smear someones reputation simply because you are still wet behind the ears on how liquidity pools works especially for an STP?ECN broker like IC markets. The brokers you quoted in your essay above are classified as market makers & NOT STP/ECN brokers so they can adjust whatever they want cause they run their own book.

I have no relation to IC Markets or any other broker. From all the brokers I used in my 30 years of trading Forex the execution, spreads & customer service is excellent & the best I have ever seen so far.

I truly suggest that you stick with market makers to enjoy the bonuses, competitions & adjustments as most probably you will end up losing your money to them while you think you are being given a great service

They decide to not reinstate positions. They decide do not compensate more. I lost 85% of account while RIGHT prices was on 50% ( ~$5000 ) of my account.

Also i have another 2 accounts which is not get margin called or stop outed. I have there only 1 USDCHF and even with that weird misquote imy account was alive. After SNB news i was in shock and quickly closed that positions on both accounts. After that ICMarkets adjusted my closings, because i closed my positions ON WRONG PRICES, they adjusted 2 of my accounts and deposited some money.

But here is the shame they suddenly removed adjustment from these 2 accouns ! I have a daily statements where i can see adjustments, but on platform it is erased already and no money was refunded at all ! 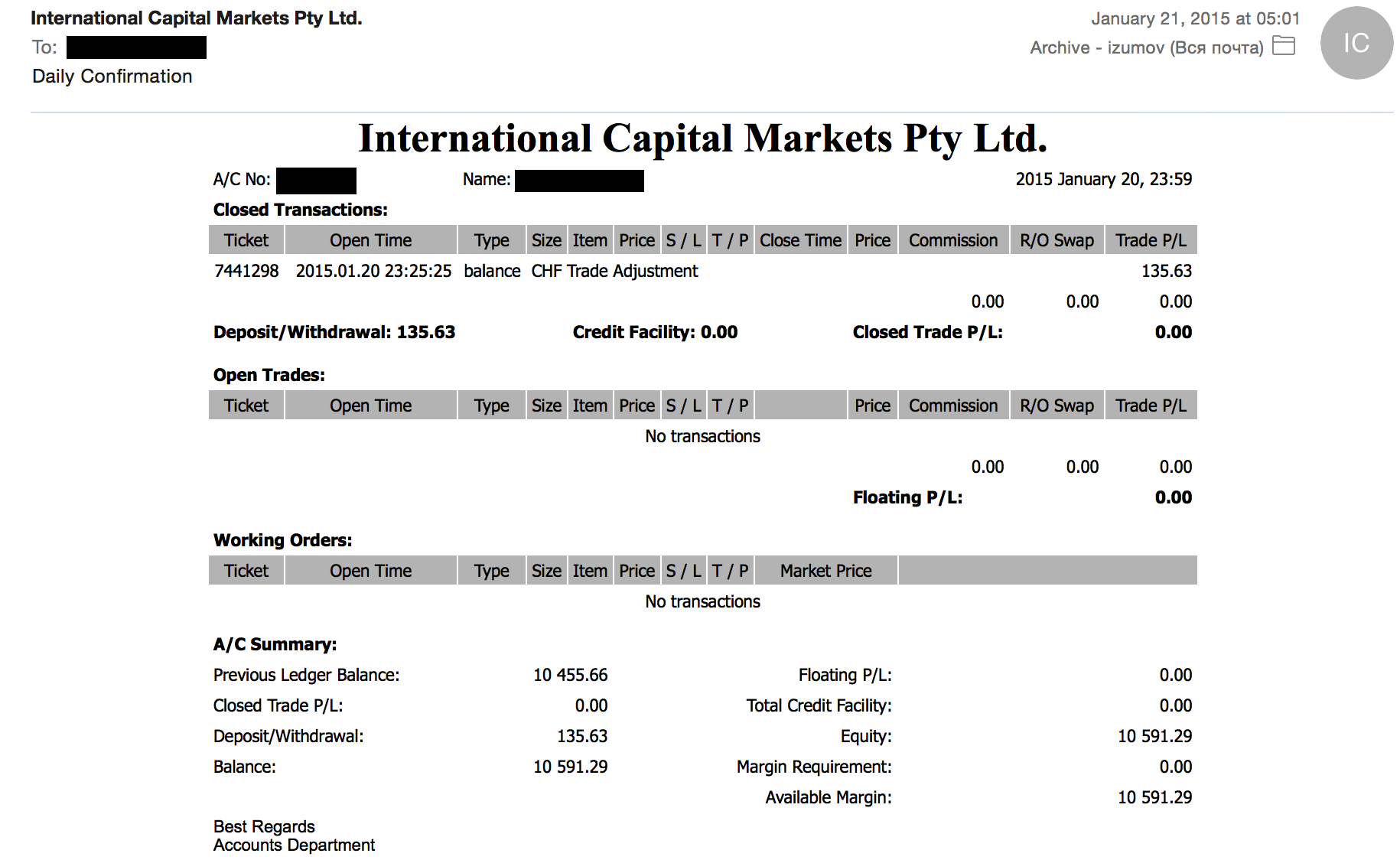 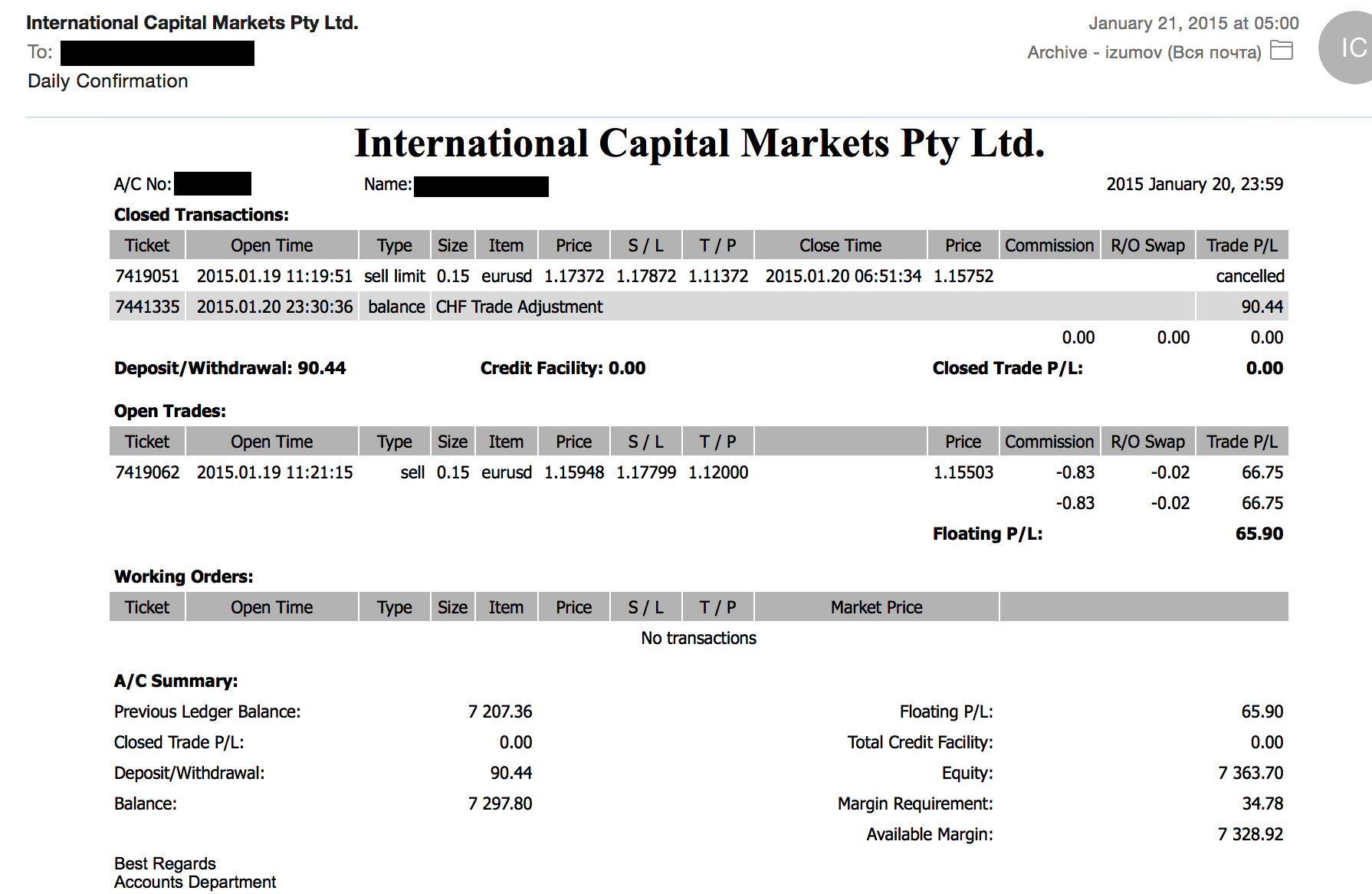 Unfortunately not, though you can do business with them via an International Business Company.

subbattle
Jan 17 2015 at 10:37
Member Since Aug 18, 2013   4 posts
I have been used icmarkets for one year. Great execution, no requote, tigh spread, average customer services, and fast withdrawal.

mdgulf
Dec 26 2014 at 15:59
Member Since Dec 18, 2014   3 posts
i have been trading on a strandard account with ICMarkets i find spread tight ,also i havent faced any troubles with the platform which enables scalping and EA .. and i think that withdrawal request processing is one of the fast as long as you make the request before 13:00 (GMt) Respectable Broker