Yes it is.
I posted my website in bio, so there is information about. And also there is an email for details [email protected]
@Marcellus8610
Cotación Mensaje Señalar

eur / jpy
After clear MACD signals (crossing the signal line and pronounced convergence) on the hourly chart, also price line position under the EMA 100 and EMA 200 lines, gave me reason to open a sell trade.
I took into account the possible risks that could be associated with support at 142.00 and it can be noted as EMA 100 on the four hour chart. But having shown patience and trust in my trading system, I was in no hurry to close the trade too early, during the pullback of 141.840 – 142.250.
In addition, I saw that the Euro Dollar (correlated currency pair for the Euro) did not receive enough support to break the trend.

The gbp / jpy is a currency pair that correlates with the eur/jpy. The trade was processed according to a similar scenario. I traded the downtrend on the hourly chart even though the MACD was not as clear as the Euro Yen. I took this fact into account during risks calculation.

For both trades the stop loss levels had been placed above the nearest resistance levels. 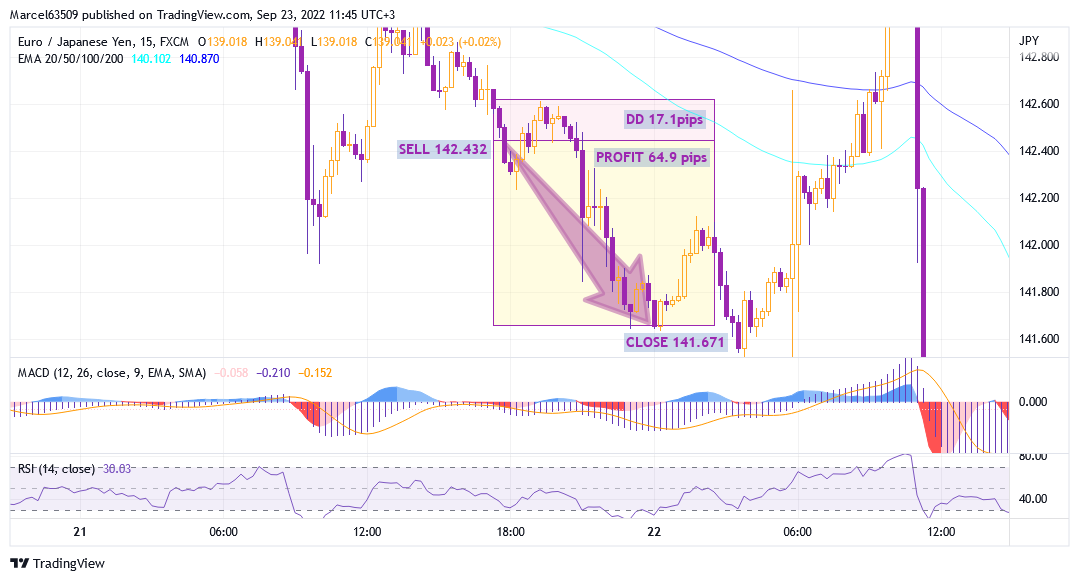 elgalal5500 posted:
why the copy not work with me?

What do you mean by copy?
@Marcellus8610
Cotación Mensaje Señalar

Marcel Durham (MarcellusLux)
Oct 07 2022 at 09:23
Miembro desde May 19, 2020   posts 199
Today’s analysis is related to my EUR/USD trade on September 27th. Also welcome to read about my analysis of profitable trades that I made before in the previous post.

So, the Euro/Dollar, according to my forecast, had a clear divergence on the daily chart. Declining to the levels of 0.95700 formed a narrowing correction, which can be seen on the four-hour chart, where the MACD showed a crossing line signal for a further increase. At the same time, on the hourly chart, the correction showed a strong upward potential and show a convergence on the MACD as confirmation of further growth after going beyond the correction. I waited until the price starts to fluctuate steadily around the key support area of 0.96000 and opened a buy trade.

The first critical moment was when it reached 0.95700, when it became clear that the narrowing correction had changed to a directional corrective trend, and in case of an absolutely correct trading decision, it was necessary to close the trade during the following growth and fluctuations around 0.96000 key level. But instead, I was counting on a rise to the higher 0.96300. However, as the result the trade was close at stop loss level 0.95681.
Thus, this is the mistake in too high deviation in risk management. In this situation, it was necessary to respond to risk signals with higher sensitivity.
Archivos adjuntos:

I published a short analysis before opening a trade on my telegram channel. if you are interested in understanding the principles of trading on my PAMM account, then welcome (find link in bio).
The main theses of analytics on which this trade was opened:

In addition to these data, I used the LUX algorithm for calculating possible risks , stop loss level set at 0.96634 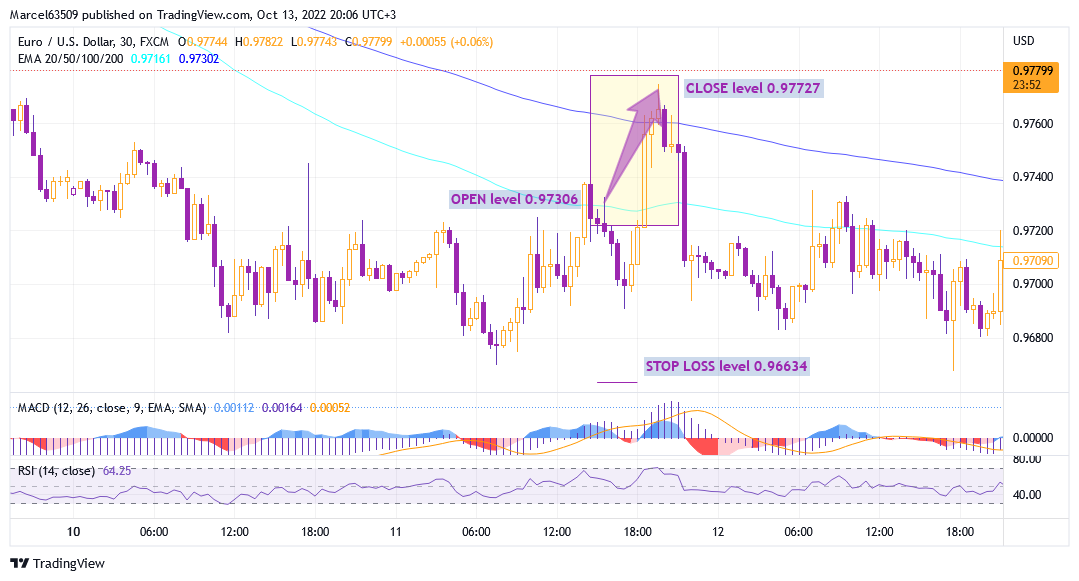 The first eur/usd and gbp/jpy trades are unprofitable, because I mistakenly took the breakout of the key marker level of 1.03880 on the EUR/USD as a buy signal. The breaking through this level turned out to be false, and the trade was closed by stop loss.
GBP/JPY reached the level of EMA 100 on the hourly chart and EMA 200 on the thirty-minute chart. Given the situation on the four-hour chart and the MACD divergence, I decided to sell. This is a hasty decision that did not take into account the possibility of an extension of the corrective trend on the four-hour chart to the EMA 100 level.
After the mistakes analysis was done, I analyzed the Euro Dollar market in depth, and a short analysis was published on telegram channel (find in bio). A few minutes later, I received a confirmation of a sell signal and opened a trade. Further it was closed on a take profit level and covered the loss.

Marcel Durham (MarcellusLux)
Dec 14 2022 at 17:56
Miembro desde May 19, 2020   posts 199
December is approaching the middle and the trading results show that this year has been really successful for LUX.

Fact 1:
This is the end of the year and I will publish the annual results later, but now I can only hint to those who do not follow myfxbook that the annual profit target is 136% completed. That is, LUX has exceeded expectations. This is a strong motivation 📈

Fact 2:
EURJPY trade (December 9) was in the top 3 best trades by profitability 💰

Marcel Durham (MarcellusLux)
Jan 13 at 16:06
Miembro desde May 19, 2020   posts 199
The first trading week of this year ended with a profit 📈, despite the fact that it started with some losses, while the risk was completely under control 🛡
This week has provided an increase of 1.48%, and this is only the beginning of the year and the beginning of January.

EUR/JPY was closed by stop-loss after the price exceeded the resistance level of the local short-term correction. The following trading analysis showed that the stop-loss level was set too close and should have been located above the 100 EMA on the thirty-minute chart, literally 10 pips higher. This would make it possible to handle a short-term DD and get the predicted profit during the further fall.
EUR/CHF profit trade (watch the video in telegram) was closed before the take profit level was reached, as I saw that a reversal could be started earlier and limited the risks by taking the profit.