You have funds in Alpari?
Have to read this!
https://www.alpari.com/company-news/posts/2015/january/important-announcement
PAMM MANAGER // Professional Fund Manager
Devis Message Signaler

Retail client funds continue to be segregated in accordance with FCA rules.


doest it mean that you will get your money back i f you are Retail client ??
Devis Message Signaler

QUOTE:
What happens if Alpari UK is liquidated?

The Financial Services Compensation Scheme (FSCS) protects eligible claimants up to £50,000 in the unlikely event that we are unable to meet our financial obligations.

Please note that eligibility depends on the status and the nature of your claim.
Devis Message Signaler

keith Mellor (Sceadagenga)
Jan 16 2015 at 13:50
Membre depuis Jan 31, 2014   posts 83
Alpari is not the only one. FXCM is another. However what I find disturbing is the fact that notice of insolvency was slow to make the news and us investors are in the dark about it all.

Luckily I have not lost too much as my account was quite small although I had been getting good trading results from my strategy.

I have only lost what I could afford to lose. We all need to watch the FCA's actions for all bokers affected.

Here is an article-

By Anjani Trivedi, Lucy Craymer and Tommy Stubbington
Brokers around the world are crumbling in the wake of the Swiss National Bank's shock decision to remove the cap on its currency.

A major U.S. currency broker warned its equity was wiped out, a U.K. retail broker entered insolvency and a New Zealand foreign-exchange trading house failed after the Swiss central bank stunned markets Thursday by triggering a massive rally in the franc.

On Friday, regulators in Japan, Hong Kong, Singapore and New Zealand sought information from brokers about what happened. In Japan, the Finance Ministry was checking on trading firms amid concerns that the country's army of mom and pop foreign-exchange traders suffered big hits.

The losses were caused when big wholesale banks stopped quoting franc rates, liquidity dried up and volatility spiked in the foreign-exchange market Thursday, making it impossible for brokers to execute trades while losses spiraled. Many of these brokers offer 100 to 1 leverage, allowing clients to stake large sums with relatively little cash, meaning a 1% loss can wipe out a client.

The Swiss franc jumped 30% against the euro in minutes after the SNB scrapped its cap on the nation's currency against the euro. The surprise move caused big losses for traders who had bet against it.

FXCM Inc., the biggest retail foreign-exchange broker in the U.S. and Asia, said in a statement that the unprecedented volatility in the euro against the Swiss franc triggered losses that left it with a negative equity balance of about $225 million and that it was trying to shore up its capital.

FXCM was operating normally in Hong Kong on Friday with employees trying to sort out trading positions and answer questions from clients about their trading losses.

'As a result of these debit balances, the company may be in breach of some regulatory capital requirements. We are actively discussing alternatives to return our capital to levels prior to today's events and discussing the matter with our regulators,' the company, which has a market capitalization of about $701.3 million, said. Shares of the company fell 15% in U.S. trading Thursday. The Nasdaq website was quoting the stock 73.95% lower in the premarket.

Global Brokers NZ Ltd., which is registered in New Zealand, said it would close its doors as it could no longer meet regulatory minimum-capitalization requirements of 1 million New Zealand dollars ($782,500).

In a statement, Global Brokers said the SNB's decision resulted in rare volatility. 'Losses incurred on trades that couldn't be exited due to illiquidity were losses incurred directly with the liquidity provider and we do not have the ability to reimburse those,' it said.

Andrew Park, a spokesman for New Zealand's Financial Market's Authority, said the financial markets regulator was seeking assurances that client funds have been protected and segregated.

Hong Kong's de facto central bank said it was following up with banks on their online banking services practices. Regulators in Singapore, too, were in contact with banks and foreign-exchange brokers.

In the U.K., retail broker Alpari Ltd. said it had entered insolvency. 'Where a client cannot cover this loss, it is passed on to us. This has forced Alpari (UK) Limited to confirm...that it has entered into insolvency,' the firm said. Fellow U.K. broker IG Group PLC said it was facing a negative impact of up to GBP30 million ($45.7 million) after the 'sudden and extreme movement' in the franc.

To prevent losses from spiraling out of control, investors and trading firms often put automatic buy or sell orders in place when currencies move a lot. But the very large jump in the Swiss franc happened so fast that everyone tried to close out their trades at the same time. Liquidity disappeared, making it impossible to execute the trades and allowing losses to spiral upward.

Brokers 'couldn't possibly have covered [these positions] because the market moved instantaneously,' said Mirza Baig, head of Asia FX and interest rate strategy at BNP Paribas in Hong Kong. 'There was no liquidity in the market at the stop loss level,' he said referring to orders that are triggered once a currency breaches certain levels

The trading losses occurred within minutes of the Swiss central bank's announcement. Because major currencies rarely move more than 1% or 2% in a short period, investors are able to borrow large sums to juice their bets. Traders can put down $50,000--or even less--and make a bet worth $1 million or more. Excel Markets, which is connected to New Zealand's Global brokers NZ, advertises 400 times leverage. The downside: a small adverse move can lead to a wipeout.

When the Swiss bank's decision was announced, the euro fell almost instantaneously from 1.2009 Swiss francs a euro to 1 with barely any opportunity to trade in between. From there, it hit 0.9750 and then 0.85 before rebounding somewhat.

That meant anyone who had bet on the euro to rise, with insurance in the form of a sell order at or around 1.20, was stuck. It also means that any retail brokers whose systems still appeared to offer the ability to buy or sell at those incremental levels, couldn't deliver those rates in reality.

Denmark-based Saxo Bank A/S, which offers trading in a number of financial products to retail customers, wrote to clients saying it was taking a fresh look at all its clients' franc trades Thursday, and 'this may result in a worse execution rate than the originally filled level.'

'I think it was a fair way of dealing with it,' said Steen Blaafalk, CFO at Saxo Bank. 'The move was just so extreme. I've been in the market 30 years and have never seen anything like it. Clients that lost money can blame us, or they can blame themselves. We have always helped and guided them on their risk management of the Swiss franc and warned of the risk.'

Retail currency house OANDA also said it suffered losses amid 'vanishing liquidity' in the market. It said it forgave all negative client balances that were caused when traders couldn't close out positions quickly enough.

and James Glynn contributed to this article.

CupidAlaska posted:
I would have thought that Alpari UK would be one of the last to shut the doors... I guess I was wrong.

Alpari UK, but not Alpari Russia... are they still in business?
Devis Message Signaler

...ah the Russians. Keeping secrets. Perhaps they are gonna fail too? Or perhaps Russia will step in and say it is a Russian institute, so they will not allow it to fail (state subsidy / government bailout). 😉
Devis Message Signaler

...ah the Russians. Keeping secrets. Perhaps they are gonna fail too? Or perhaps Russia will step in and say it is a Russian institute, so they will not allow it to fail (state subsidy / government bailout). 😉 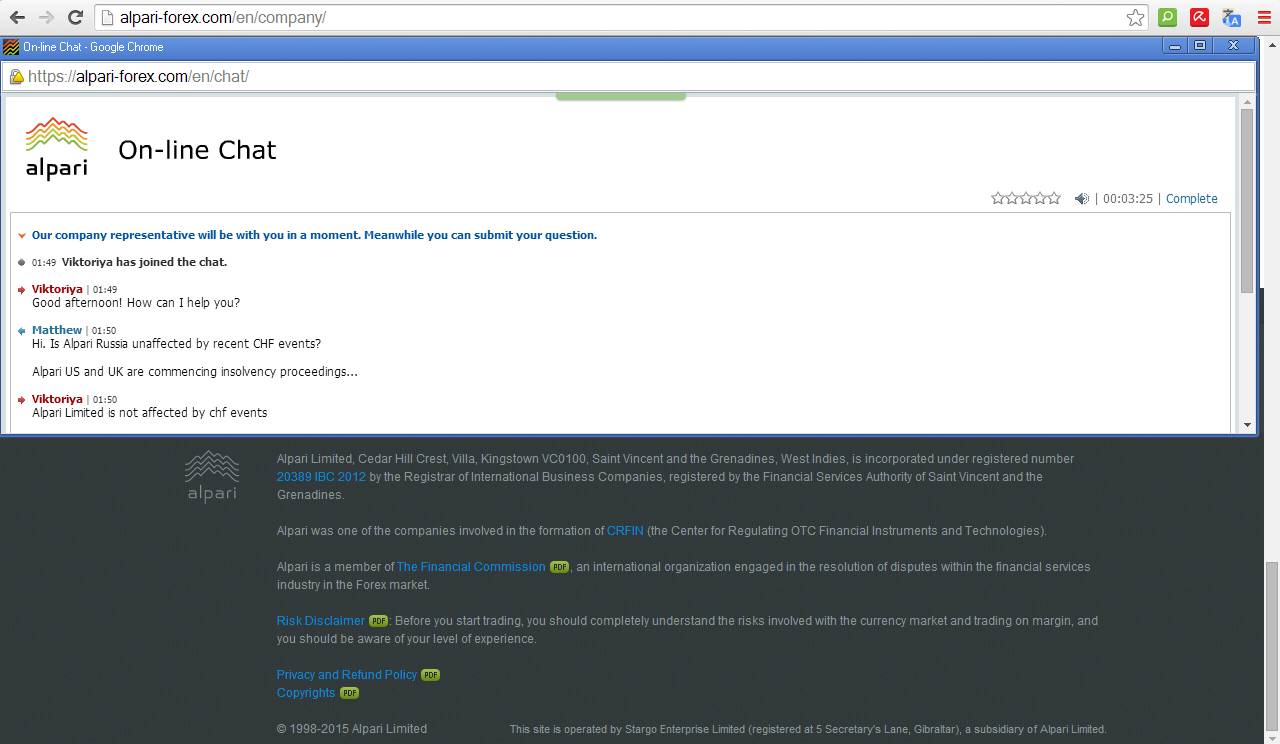 Steve B (stevetrade)
Jan 16 2015 at 15:00
Membre depuis Oct 28, 2009   posts 1415
That's a blasé statement. How can it not have been affected? I would personally take any brokers assurance that they are unaffected with a pinch of salt.
Best regards Steve
11:15, restate my assumptions: 1. Mathematics is the language of nature. 2. Everything around us can be represented and understood through numbers. 3. If you graph these numbers, patterns emerge. Therefore: There are patterns everywhere in nature.
Devis Message Signaler

stevetrade posted:
That's a blasé statement. How can it not have been affected? I would personally take any brokers assurance that they are unaffected with a pinch of salt.
Best regards Steve

Yes, quite agree. They are the 'wolves guarding the hen's house'. 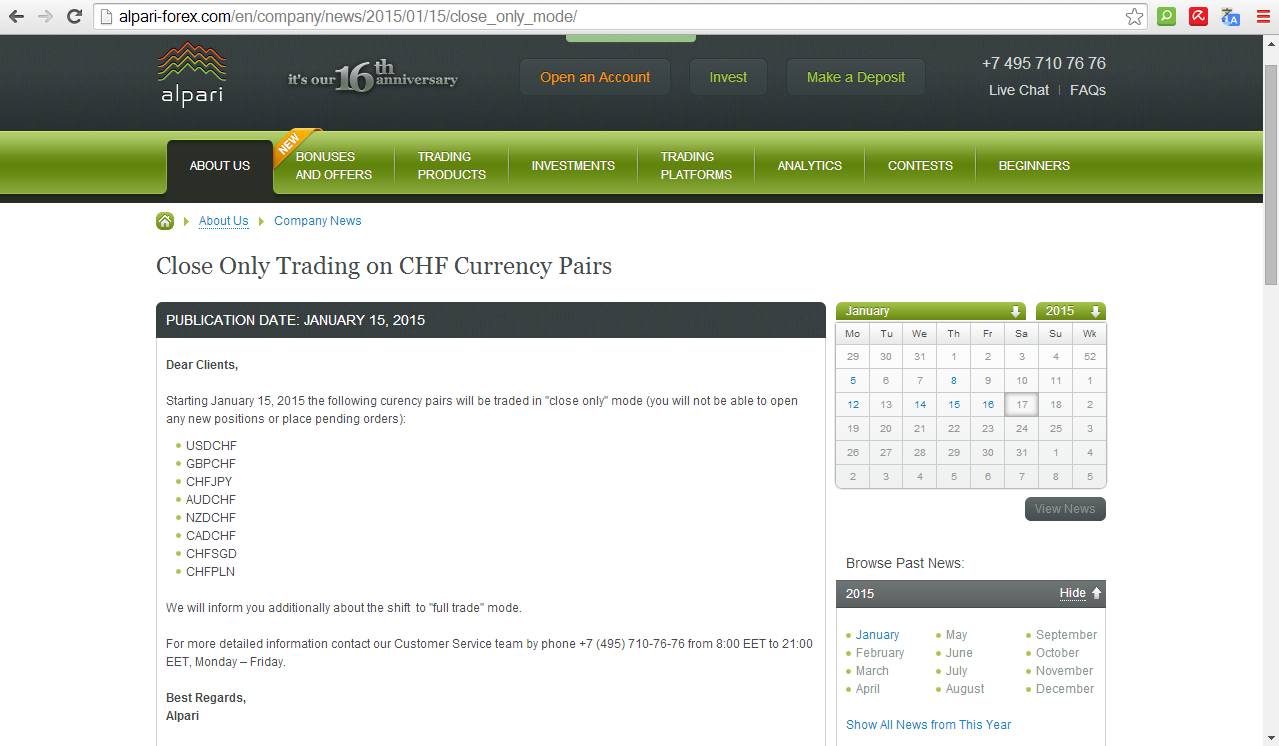 makeitrain posted:
shame alpari RU still live..horrible horrible and i mean horrible broker!!! They deserve to die to be honest

Probably explains why they are still around. 😝
Devis Message Signaler

makeitrain posted:
shame alpari RU still live..horrible horrible and i mean horrible broker!!! They deserve to die to be honest

Probably explains why they are still around. 😝

Haha, Their death would do the industry good though.😇
Get rich or just die
Devis Message Signaler 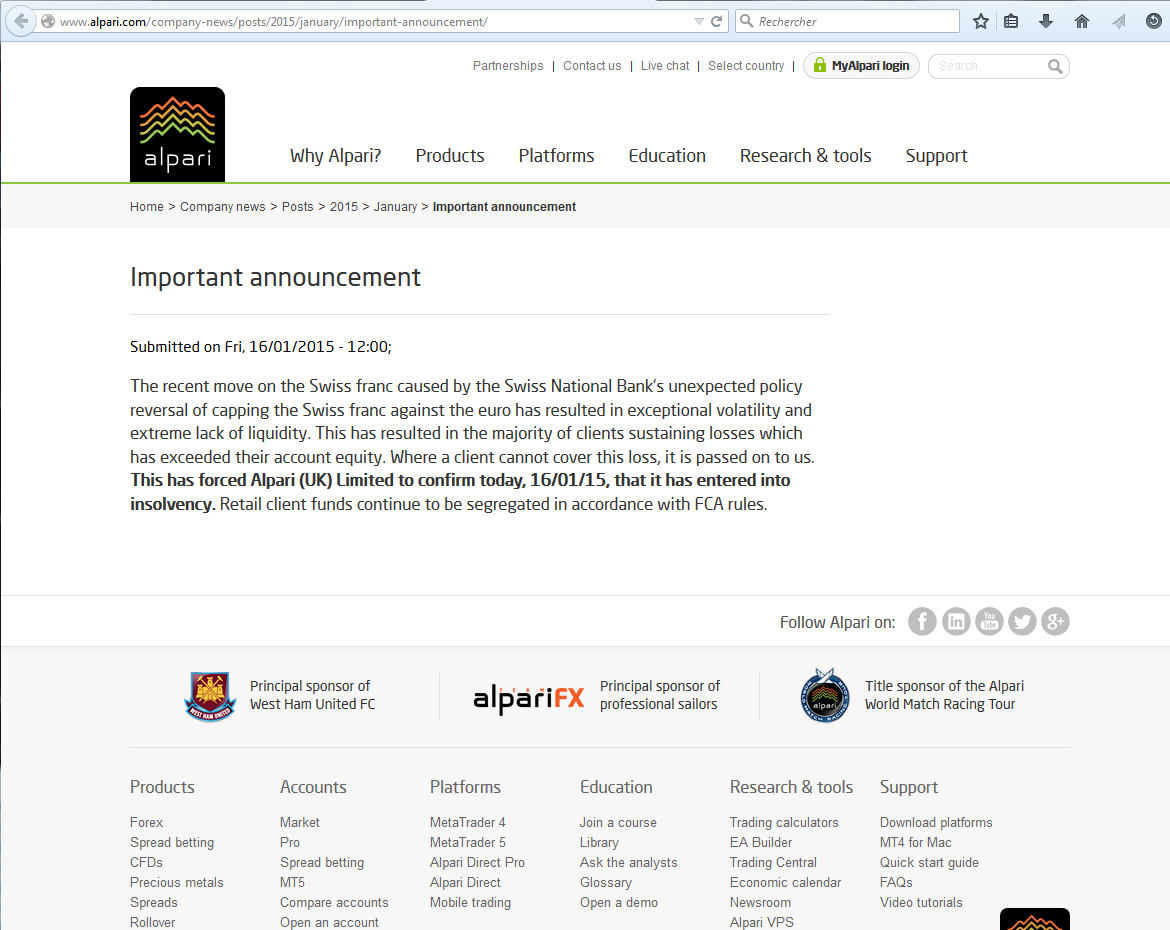 A serious broker, at least here :