Anmelden Sign Up
Myfxbook App
Download
Calendar
Aussicht
Calculators
Open an account with XM Group
To use chat, please login.
Back to contacts New Message
Would you like to receive premium offers (available to Myfxbook clients only) to your email?
You can unsubscribe from these emails at any time through the unsubscribe link in the email or in your settings area, 'Messages' tab.

Hi all. Like i`ve promised you last time, into the next couple of analysis i`ll show you the needed steps 1 by 1 from BTC to reach the next ATH. I`ve discussed the first two into my last two analysis and now it`s a time for the final third one.
Here`s the third step to the next ATH (chart 1).
Many of you will say that after every single halvening, the next ATH takes more time. That`s right but not at 100%. I`m finding a very strict and simple rule into the past 2 ATH. Yes the 20K ATH took more time from the halvening than the previous one but… and this is a big but, check the time between breaking the previous ATH price after the every halvening and the next ATH. In both cases it`s exactly 10 months.
And here comes the third step to the next ATH. We can say that 10 months after we break the $19666 price level we can expect the next all-time high. When will be that ATH? Like I said all depends from the nearly $20k break.

So let`s summarize all 3 steps.
1. 21 monthly EMA. April candle closed above it. The first condition is already fulfilled.
2. A monthly close above $10500 and a HH (higher high) into the weekly chart.
3. Break above the last ATH ($20k) and 10 months of time.
That`s all. Simple enough.

All or nothing
Zitieren Nachricht Bericht 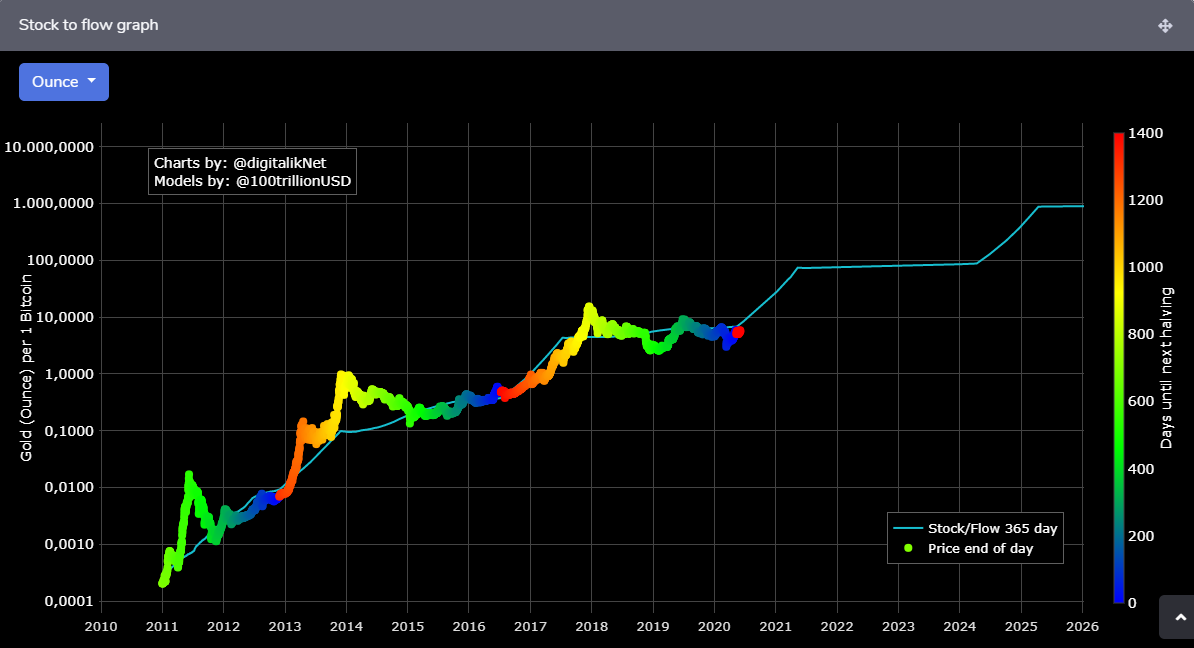 Hi all. Kind a long time no see from me but this time you`ve got to excuse me again. I`m not in a mood for some big charting so i`ll be short and share with you the actual weekly chart from the last time plus some new Stock to flow model.

Actual situation (chart 1).
Support and resistance:
Support:
1st support - $8500 - 50% Fibo and VPVR profile
2nd support - $7800
Resistance:
1st resistance - $9500-9800
2nd resistance - $10500 – that will be a MAJOR resistance not only for the mid-term but also in a long-term, on the way to the next ATH like mentioned above.
Weekly pivot point is $9278.15.
50 SMA is below the price for now.
21 EMA is below the price for now.
We`re very close to a bullish cross between 21EMA and 50SMA but let`s wait for confirmation.
Whole this week candle is above the symmetrical triangle. Very positive sign.
As a conclusion i`m expecting a positive next week.

With the actual money printing and very possible inflation and even hyperinflation the future BTC price can reach $100k, $1mil. and more. But what will be the purchase power of this $100k or $1mil.? I think that`s the big question. Unlike the FIAT, Gold is gold. No matter now, before 100 of years or after 100 of years. That`s why the latest BTC vs Gold Stock to flow model is getting more important. Just check the chart.

That`s all for now.
See ya next time.
Anlagen

Deutsch
© 2021 Myfxbook Ltd. All Rights Reserved.
HIGH RISK WARNING: Foreign exchange trading carries a high level of risk that may not be suitable for all investors. Leverage creates additional risk and loss exposure. Before you decide to trade foreign exchange, carefully consider your investment objectives, experience level, and risk tolerance. You could lose some or all of your initial investment. Do not invest money that you cannot afford to lose. Educate yourself on the risks associated with foreign exchange trading, and seek advice from an independent financial or tax advisor if you have any questions. Any data and information is provided 'as is' solely for informational purposes, and is not intended for trading purposes or advice. Past performance is not indicative of future results.