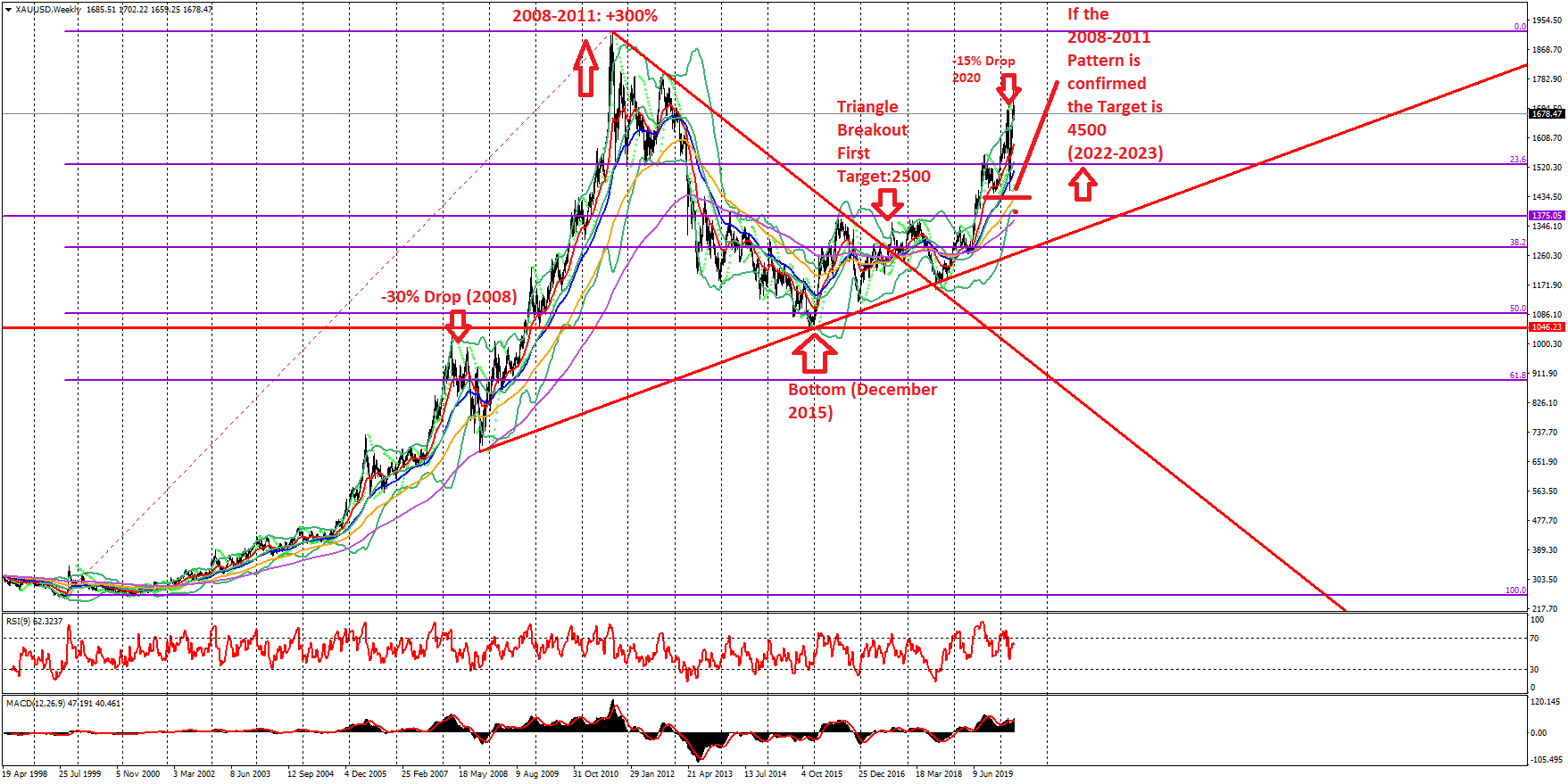 The technical situation of the gold price, however complex, seems to be in a fundamental critical development point, perfectly in line with the historical, chaotic and conflictual period in which we are living.

I would not like to underline too much the exceptional nature of a present in eternal transformation that can sometimes appear as a sort of banal, boring, eternal return, but as far as human history has always been full of crises, conflicts and contradictions, it can be noted that such as the stalemate of nuclear MAD on the one hand (which has led, so far, to the end of the conventional conflicts between superpowers) and the collapse of the Berlin wall on the other, with the consequent acceleration of the geopolitical kaos, as well as the frenetic development of finance supported by network technologies that have created virtual worlds that are very difficult to govern (de facto ungovernable as they are conceived), is creating a sort of 'showdown' between the socio-economic systems (and the philosophies that inspired them) adopted so far.

In this crucial phase, regardless of the outcomes and the directions that markets, the economy and human history will take, gold, precisely for its material and cultural values ​​sedimented in the space-time of so many peoples of the earth, will be certainly a primary actor in the redefinition of power structures (he will also be primary in his improbable, spectacular exit from the scene: in a serene utopian world no longer regulated by the concept of money).

As pointed out by various analysts, the pandemic has highlighted and detonated (and we are only at the beginning) the great contradictions, and tensions, of the financial, social and political systems and structures of both the so-called 'descendants' liberal democracies, and of the ascendant 'Asian model' ruled by China who shaped the original formula of 'socialism with Chinese characteristics' at the end of the tumultuous last century (a system that could perhaps be defined as 'State Capitalism' with Confucian historical-cultural elements, a mix that makes orthodox Marxist-Leninists tremble).

The perception of the 'common' man (assuming that this elusive, hyper-standardized 'common man' exists) of finance, price trends and stock market values ​​is a mixture of fluctuating emotions, fomented by the media, ranging from fear reverential, paranoid hatred, frustration, religious acceptance of an ineffable order.

On a personal level, thanks to my humanistic training as a historian who preceded my studies of technical-financial and geopolitical analysis, I find the charts of global cyberfinance fascinating for their ability to represent, in an almost mystical-esoteric way at times, the clash of the great forces that I would call 'psycho-material' of the actors, large and small, of our planet.

The chart, or rather the charts, of the gold price have been telling us (predicting?) Many things for several years, but after this first quarter of 2020 we are probably at an epochal turning point.

The rather obvious fundamental fact is that the world central banks are responding to this new crisis, only triggered by the pandemic, but practically inevitable in the long run, doing what they have already done in 2008: huge liquidity injections.

A trivial assumption is that the value of a physical safe haven such as gold, when the quantity of money, created from 'nothing' by central banks, increases exponentially to stabilize the terrified, irrational markets, cannot nothing but increase. 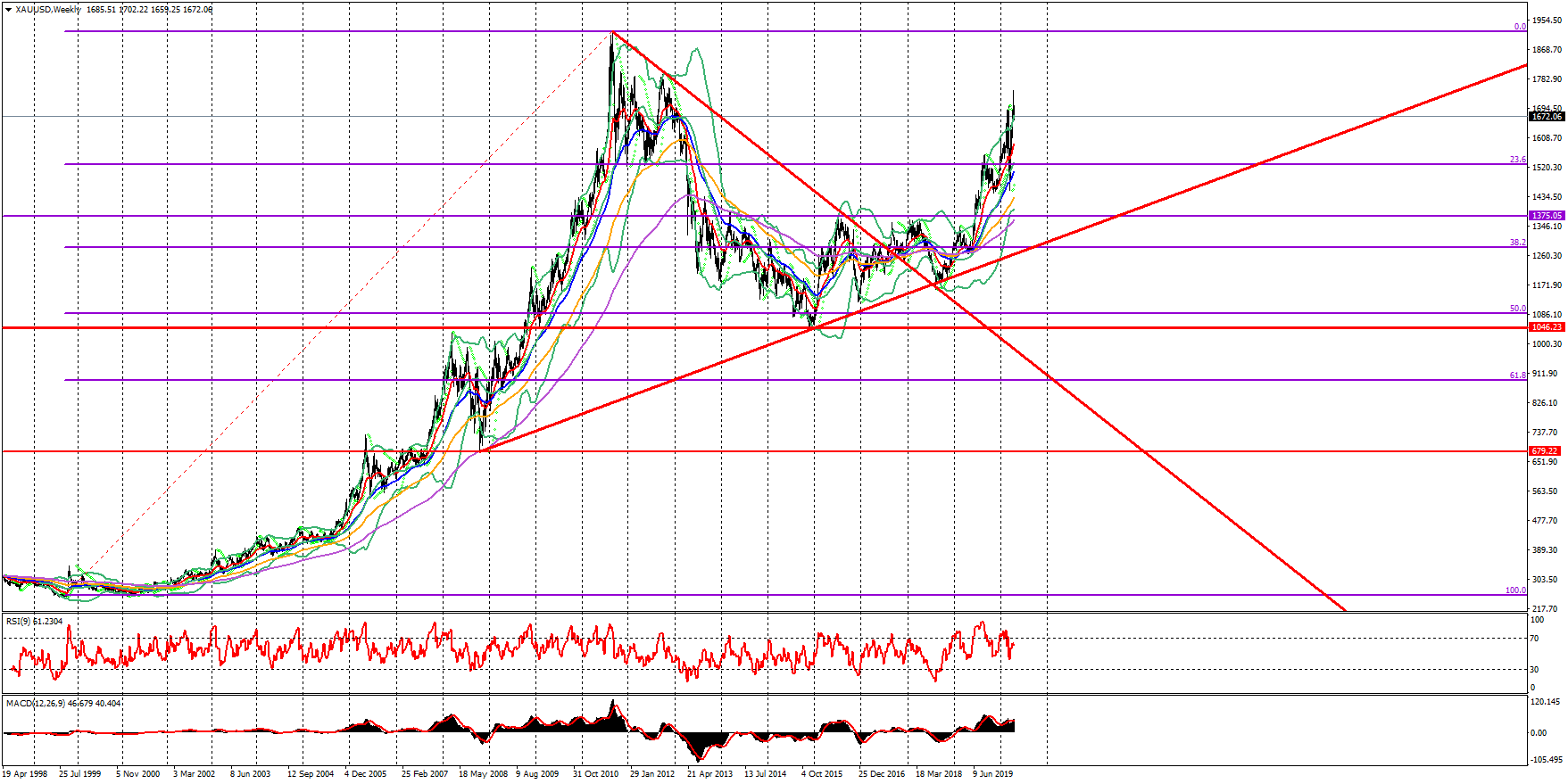 With violent movements, which at times might even seem to be reversals, this rise in price has been taking place with some clarity since the beginning of the new millennium which has seen three major moments of crisis and theoretical restructuring so far: 2001-2008-2020.
The well-known paradox, totally logical from a capitalistic point of view (the capitals go to those who own the capital), of the great liquidity injections are the famous corporate buybacks. Extreme simplification: if money costs little or nothing, it is easy to fictitiously increase the value of my company's shares.

In hindsight, since the end of the Gold Standard and the progressive end of the balance of power of the Bretton-Woods agreements, gold could only embark on a bullish path.

Obviously, this trend and vision can be objected that in reality the price of gold was even higher during the crisis of the seventies of the last century by applying the inflation filter. In reality, even using this filter, the trend remains confirmed, the world of paper money is in crisis and the value of gold, thanks to its history deeply rooted in human culture, continues to rise despite the fact that central banks don't like it at all.

But what does this mean from a technical point of view? 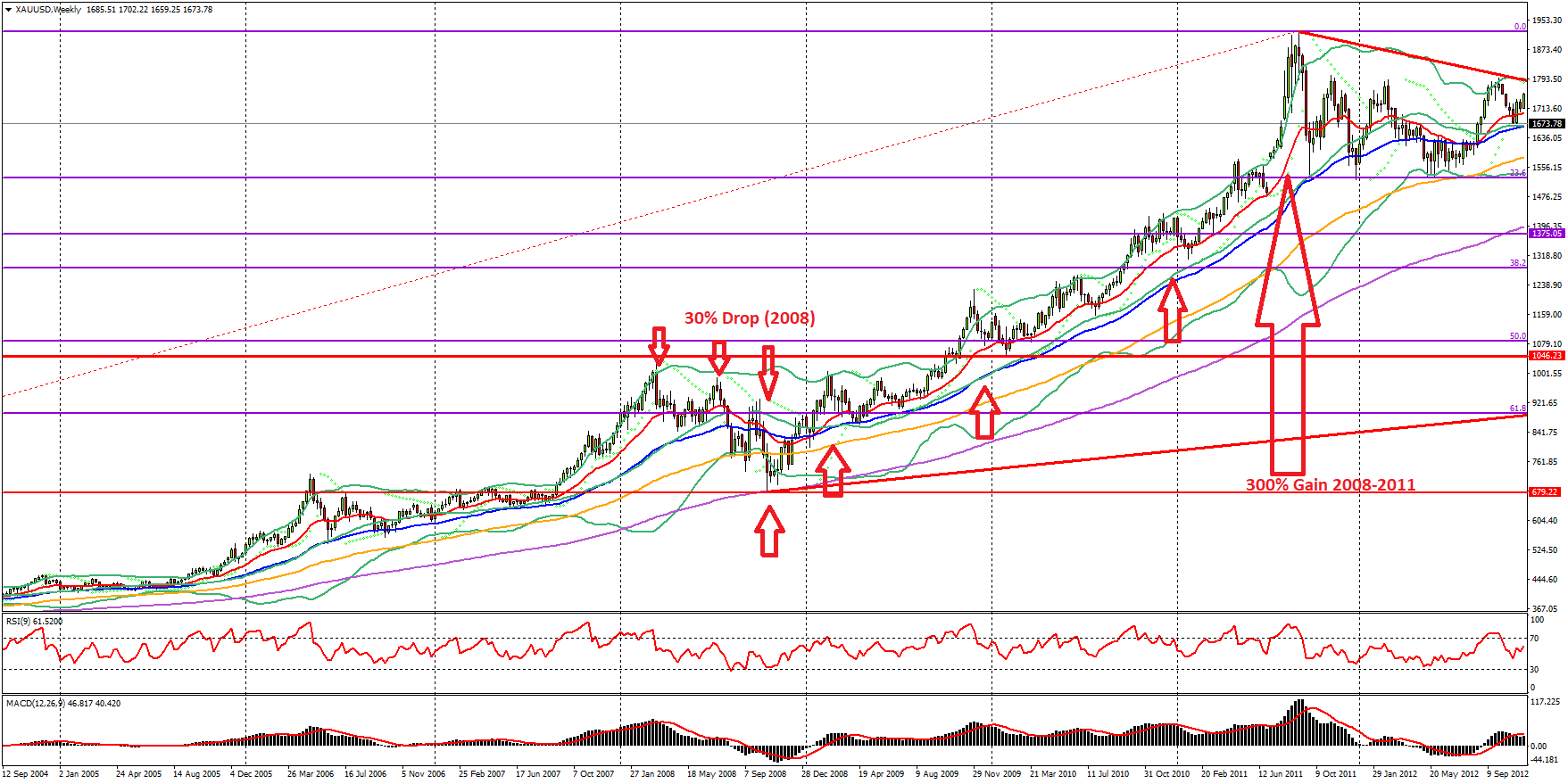 My idea, in the end, is quite simple. I believe that the movement in the gold price will repeat the pattern of 2008-2011 (in part it is already doing it) but with greater strength and, at times, greater unpredictability.

The movement in 2008-2011 was characterized by a rather marked drop in price (-30%) between mid-March and the end of October 2008, which largely followed the sell-off of the shares of the main global indices, from which it then originated, supported by quantitative easing of the world central banks, an increase of about 300% in the following three years.

As is well known, although gold is a safe-haven asset, during periods of violent descents investors may be in a hurry of liquidity and are therefore 'forced' to sell part of their gold reserves to cover losses and recover lifeblood (an explanation only partial that we will not elaborate for brevity).

In March 2020, a situation very similar to that of 2008 occurred. Generalized collapse of the markets and simultaneous violent drop in the price of gold. It is not entirely clear whether this descent, much faster, but less profound in percentage terms than that of 2008 (decrease of 15% in 2020 compared to 30% in 2008), is to be considered completed, but even if it were not, the general fundamental framework remains in support of the hypothesis of the principle of a large rise in the price in the future (2020-2023). 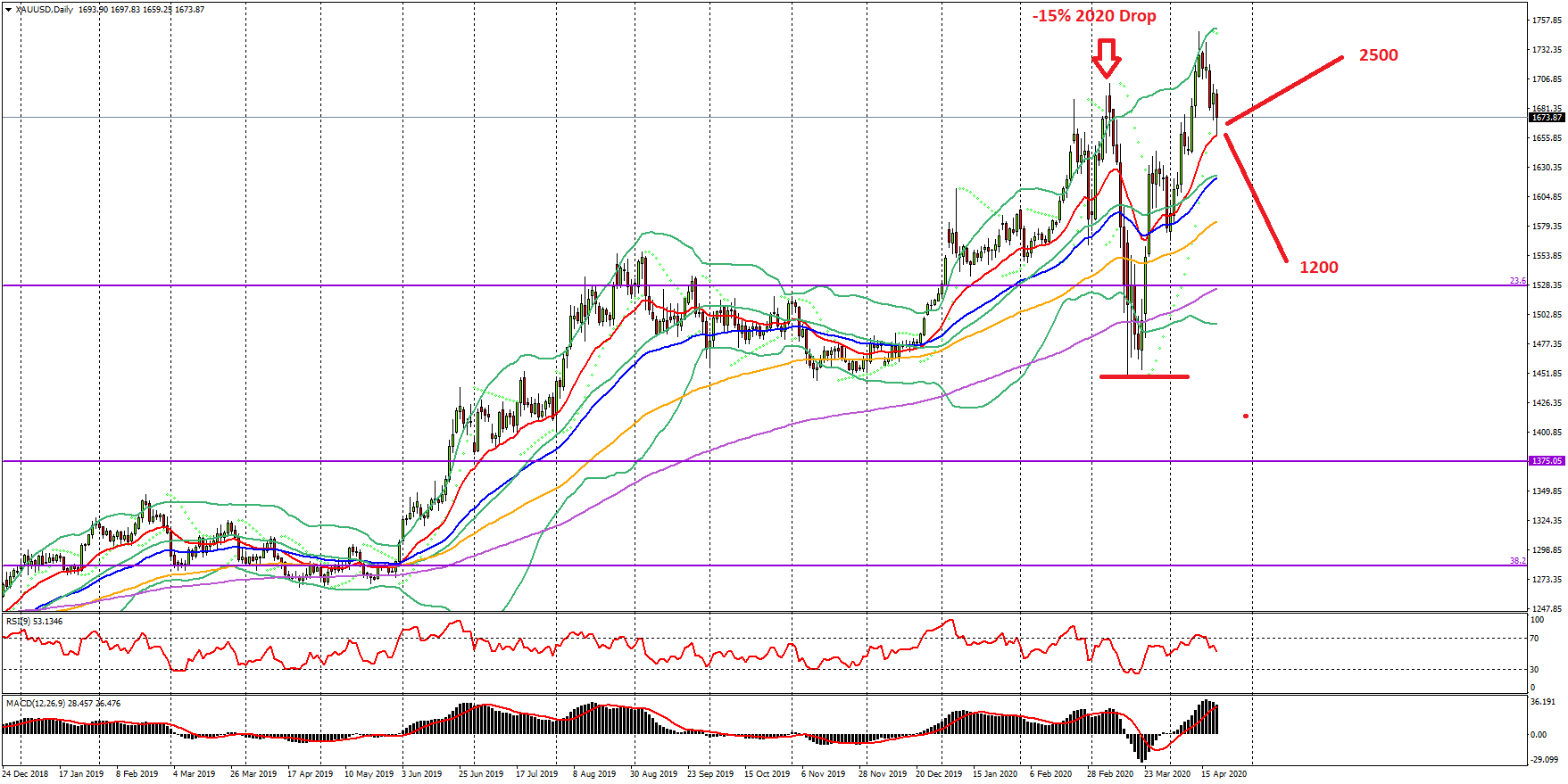 On the other hand, the 'triangle' with bullish breakout (end of 2017) highlighted in the weekly chart technically involves a first theoretical target around 2500.

The confirmation of this movement took place already last year with the overcoming of the important resistance at 1375 which marked a range of about two years, immediately after the end of the descent at the end of 2015 (descent from the peak of 2011).

If such a massive growth occurs (or will be in some way strongly opposed), many socio-economic and geopolitical aspects of the world can be expected to change in the near future.
Pielikumi

Tezilkree
May 26 2020 at 08:56
Biedrs kopš   57 ieraksti
Many say that everything is cyclical and this is a natural situation.

marco_mmbiz
May 26 2020 at 10:16
Biedrs kopš   366 ieraksti
I'd just say things like gold, some ETF's and crypto currencies following the same patterns on the long run, going up and up as the whole finance bubble is becoming bigger and bigger and technology is running more and more forward. Everyone is looking for safe havens during uncertain times; and times might become even more uncertain until we'll reach the year 2050 I guess (quantum technologies, climate change, wars on resources and energies, refugees, and so on).

PROFITINGSYSTEMS
Jun 14 2020 at 14:17
Biedrs kopš   48 ieraksti
Gold one of the best thing in decade plus that have been giving me happiness in Trading, My top 3 Instrument

Noteikumi  |  Privātums  |  Lapas karte |  Site Map Calendar
Latviešu
© 2022 Myfxbook Ltd. All Rights Reserved.
HIGH RISK WARNING: Foreign exchange trading carries a high level of risk that may not be suitable for all investors. Leverage creates additional risk and loss exposure. Before you decide to trade foreign exchange, carefully consider your investment objectives, experience level, and risk tolerance. You could lose some or all of your initial investment. Do not invest money that you cannot afford to lose. Educate yourself on the risks associated with foreign exchange trading, and seek advice from an independent financial or tax advisor if you have any questions. Any data and information is provided 'as is' solely for informational purposes, and is not intended for trading purposes or advice. Past performance is not indicative of future results.