World Indices Set to Spike into All Time Highs ... Then All Hell Breaks Loose.

I think we are swiftly approaching that.

But first, we are going to hear about the glorious stock market, rising like a Phoenix from the flames making all time record highs and the uncertainly of recent times being behind us.

Back in about 2103 I'd made a forecast we would see S&P trading into just over 2000 and from there we might see a heavy drop in the market.

I'd said I expected it to be at least 10% and could potentially be a lot more.

There had been a fair amount of noise around the indices in the time just before Black Monday which had drew my attention back to these markets which I generally only watch on a swing basis and had been rather boring for a while.

I seen there had been breakouts and this market was behaving in line with my analysis from long before, I done another analysis drawing attention to the breakout and giving downside target levels for the S&P.

The market was trading around 1970 and I gave a final downside target of 1842.

I posted this on Sunday, which was followed by Black Monday.

This led to some saying I predicted Black Monday but I never, I never knew when it would happen, I just forecast a fall and defined the levels.

This was just one of my forecasts on multiple indices which were all similarly accurate.

I'd published this in a Forex Factory thread I'd called the Dow(n).

Black Monday caused a lot of uproar and I seen a lot of talk about shorting the market, about the market maybe crashing.

On the 21st of August I posted saying I did not think it was time to jump in for a big short.

I forecast a bit more of a fall but there being a bottom found.

I'd said I expected to form a harmonic topping pattern and see the market trading into all time highs.

Then, was when the short get interesting. 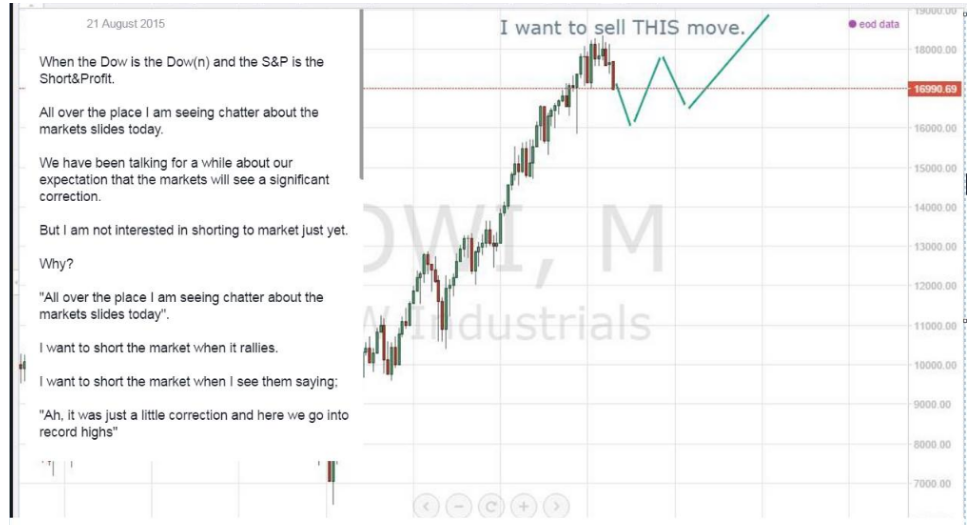 On our recent Dow chart, this is exactly what we have now.

For a short while I was looking for something potentially happening in the nearer future but before too long I decided this hypothesis was wrong and for a long time I have been watching these markets with interest but not been thinking we are about to fall off cliff even though it has made some volatile downside moves.


We'd also been shorting oil for a long time by now and targeting $20 (I will add oil back story and forecast in a following post) and on the 22nd January we took away out immediate bearish forecast on oil and indices. 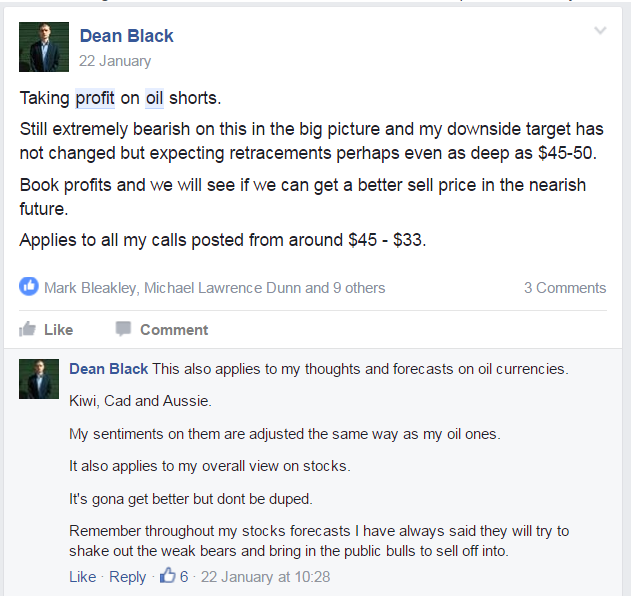 This was where that was.

We had looked briefly at shorting again when the indices were testing the highs again but I decided we were probably far too early and I'd made a mistake expecting it to happen so quickly.

We again stepped back a bit from this market a bit, although we have still gave some good signals for swings on it in the meantime.


On the 6th of May we forecast the Dow dropping into 17060 and that being a buy area.


Now, I am looking for a follow through on the rest of my analysis, all time highs, massive falls.

Down in around where the S&P made its lows we also put out this S&P forecast. 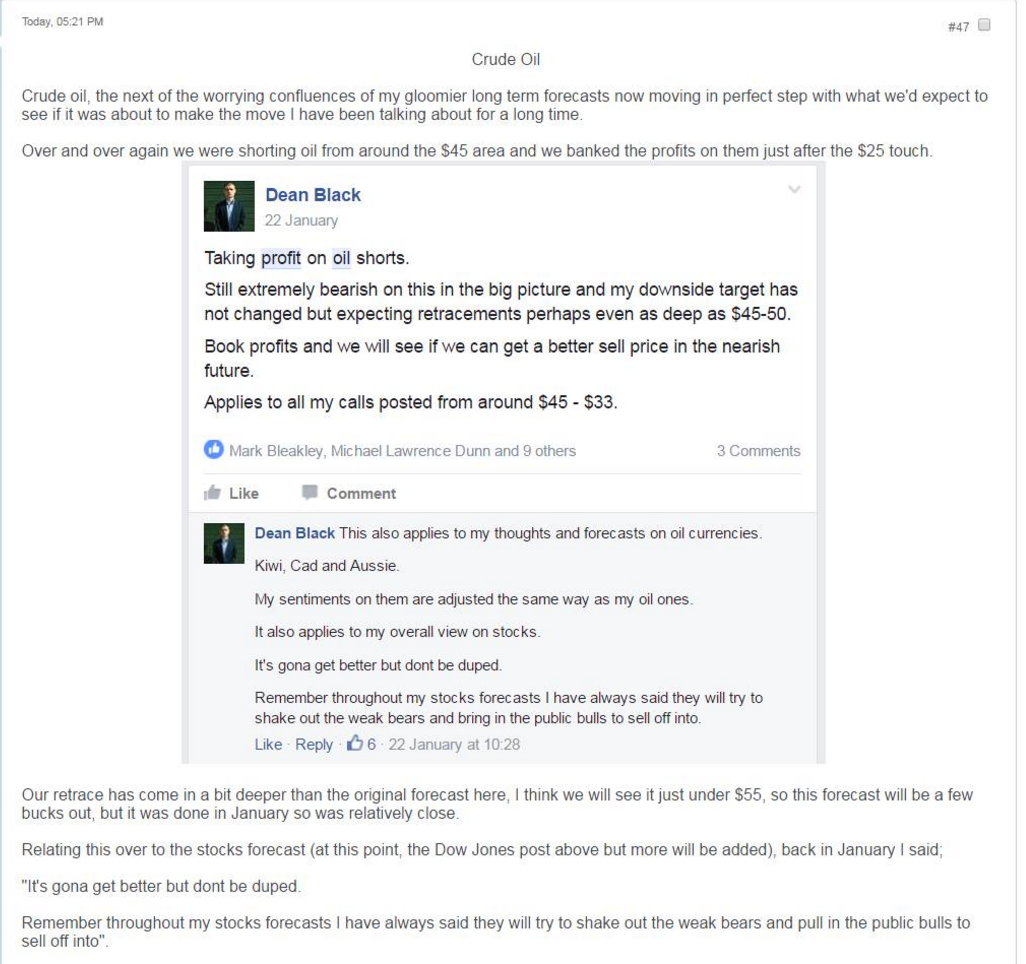 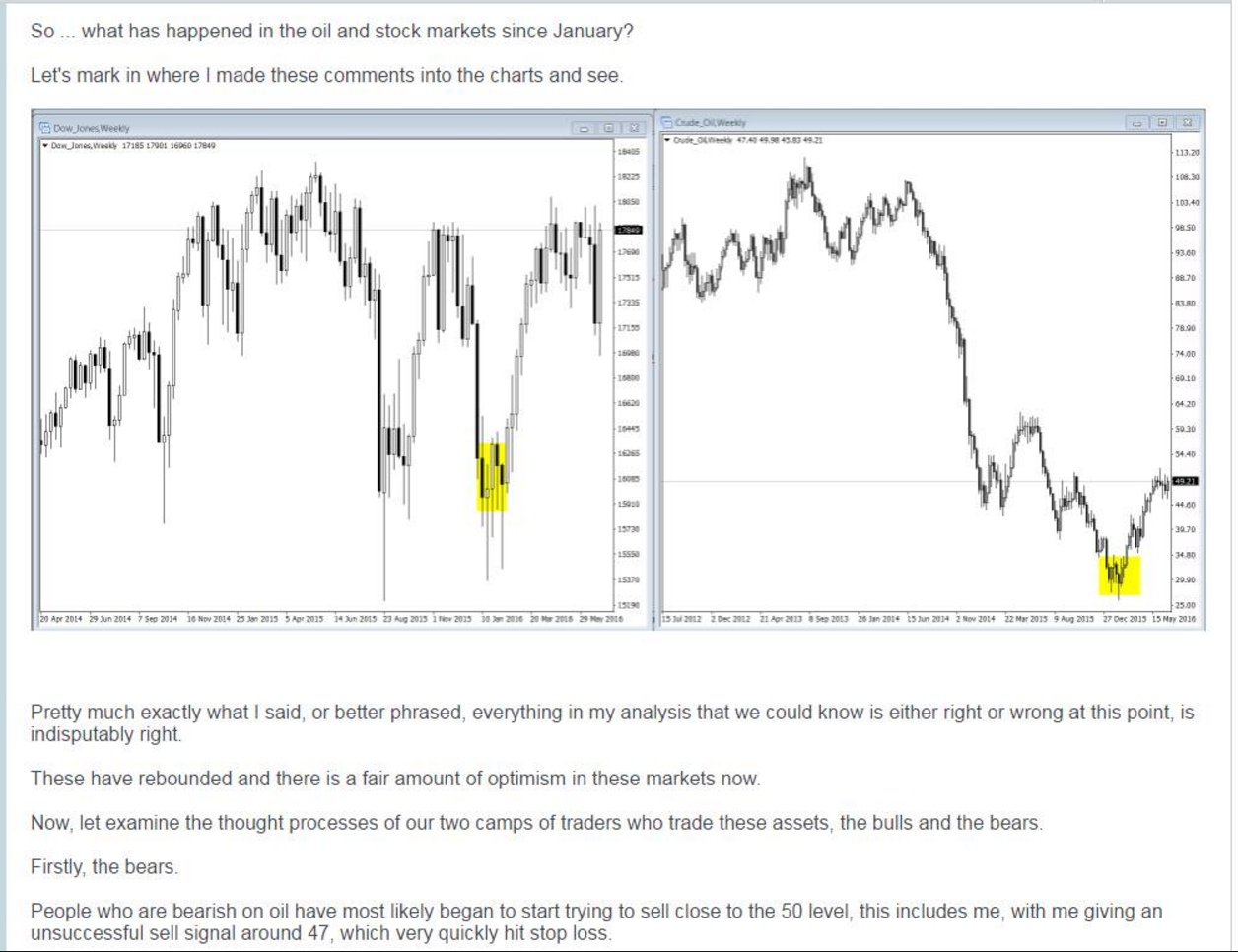 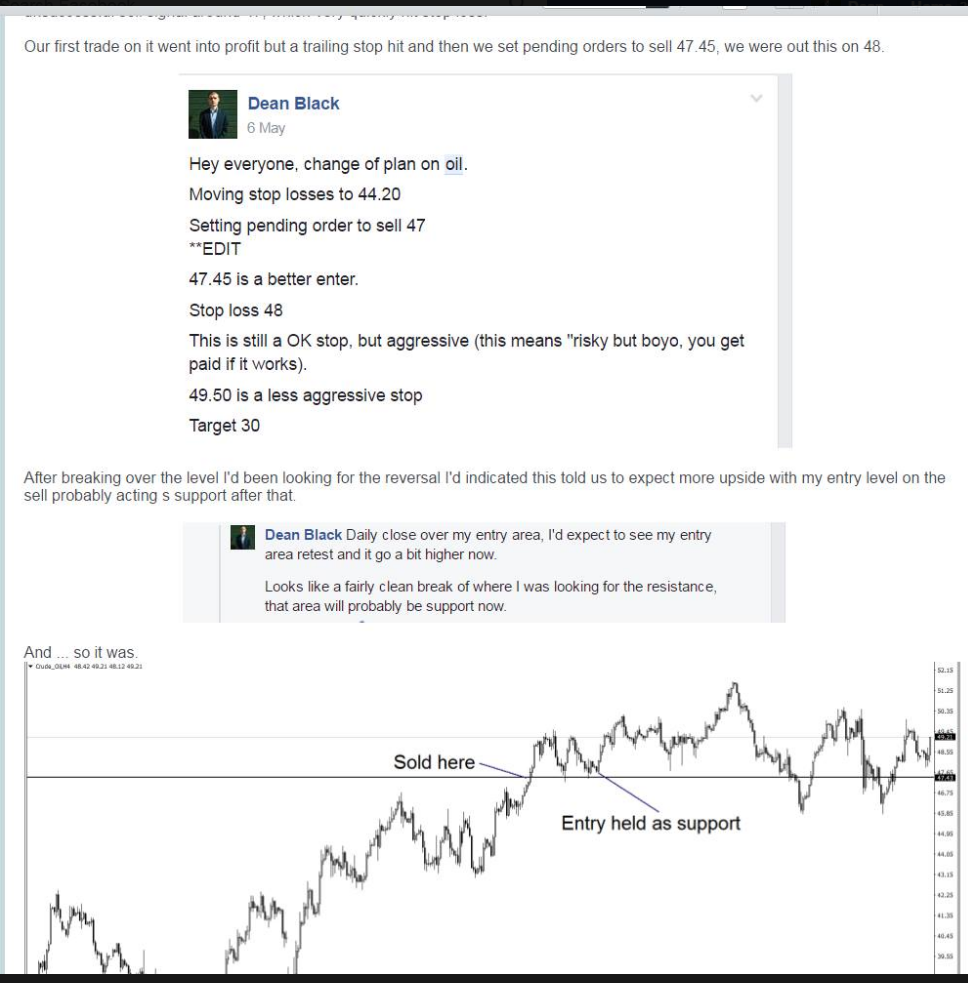 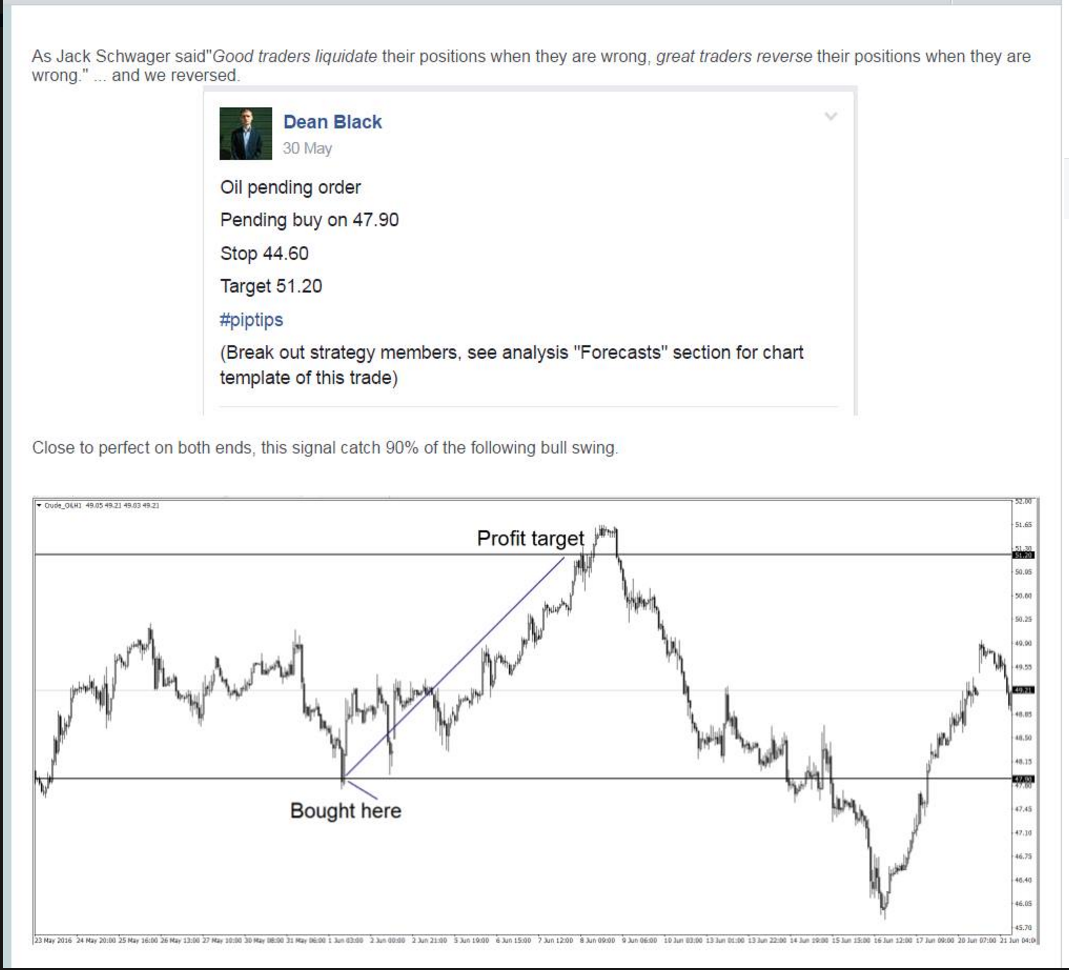 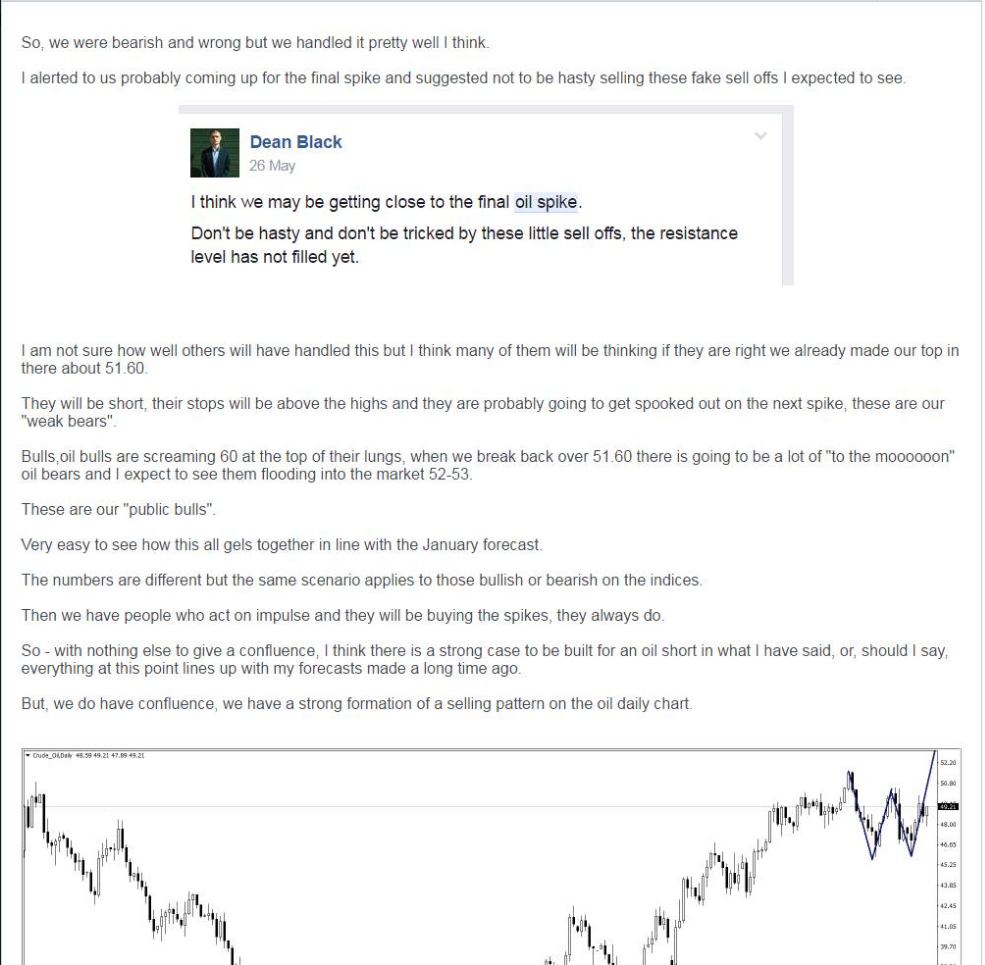 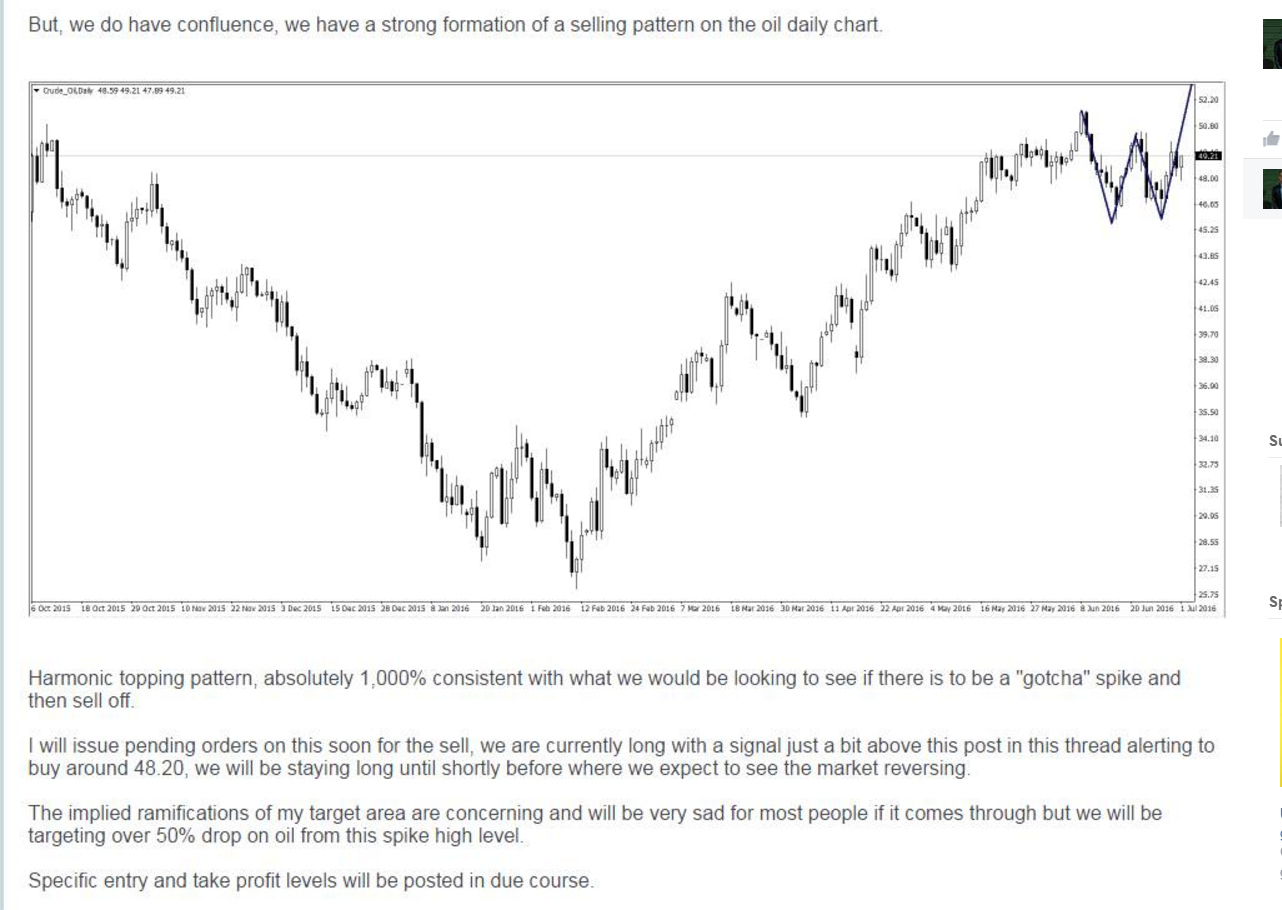 
Here are some of the moves we have made in the currency markets recently.

(Note, these are from a signals service and not any of our managed accounts attached to this Myfxbook account which is a strategy that is far more selective with its trades)

We are expecting highly profitable conditions to continue in the Forex markets. 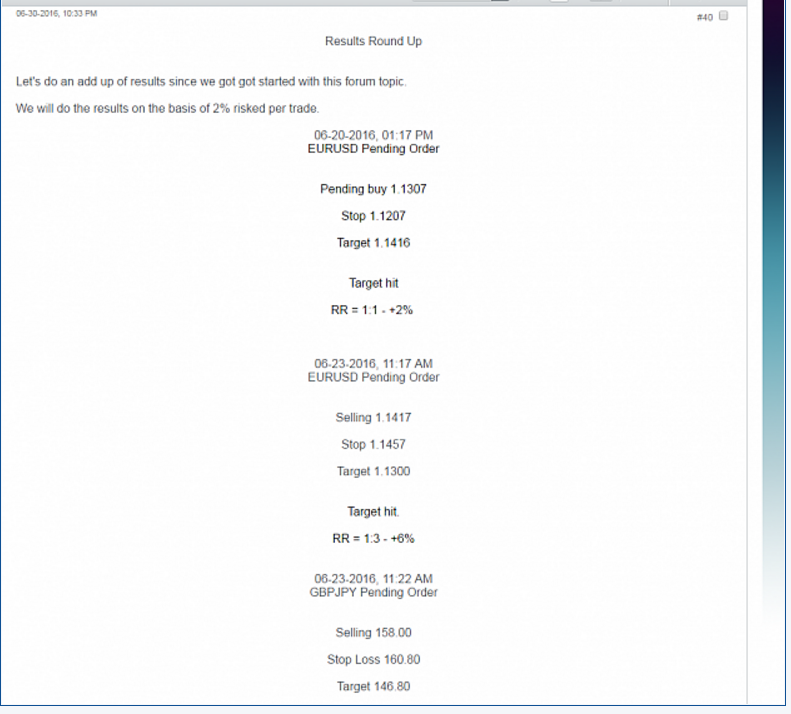 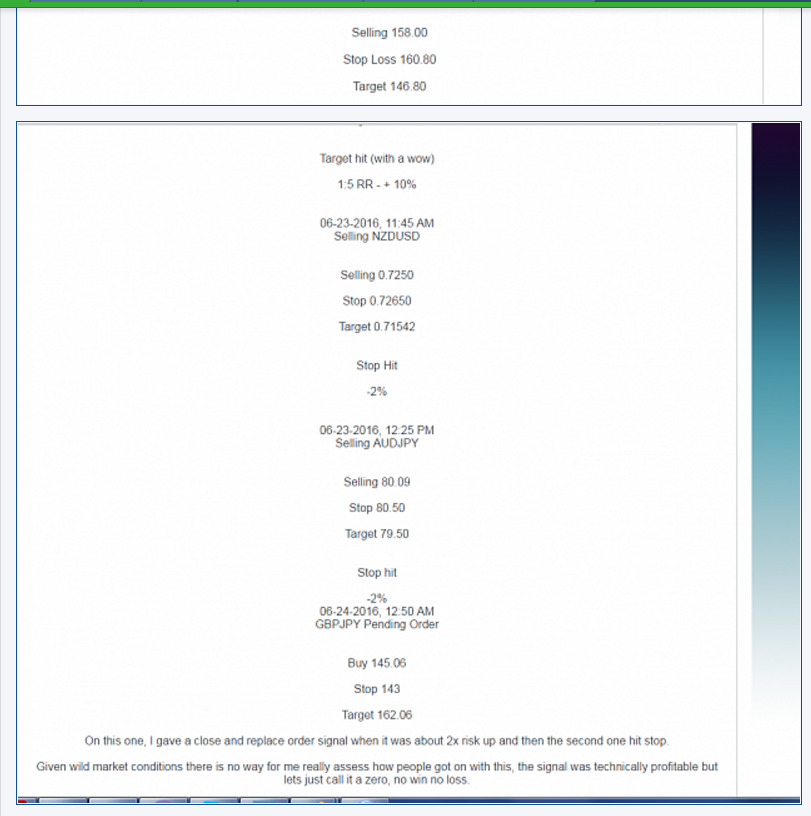 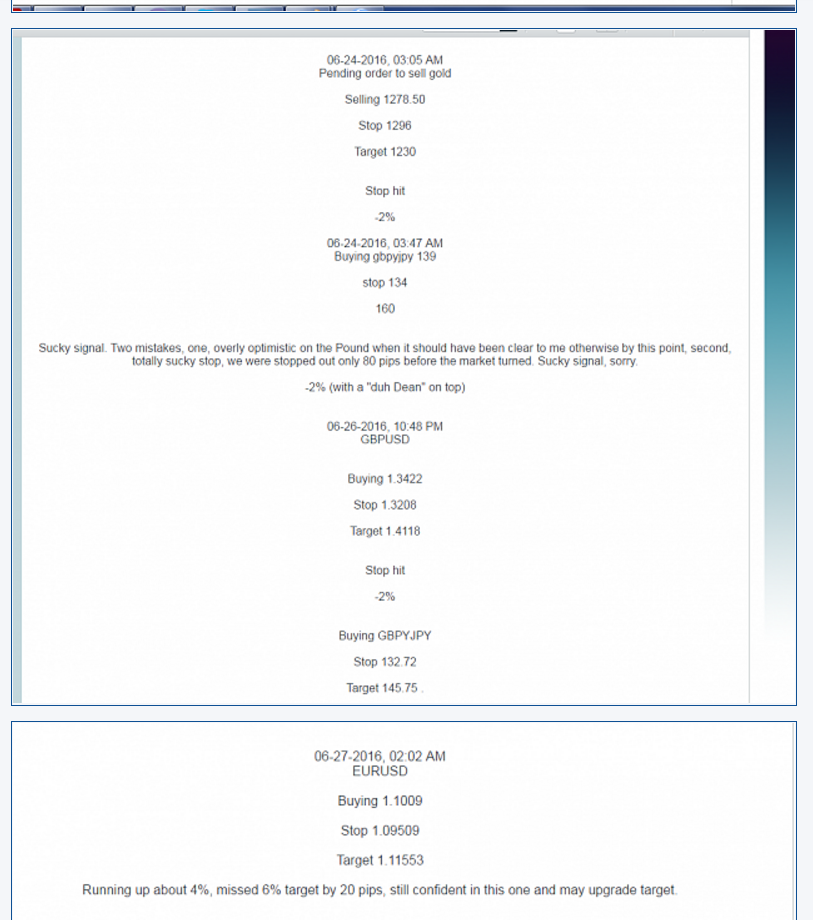 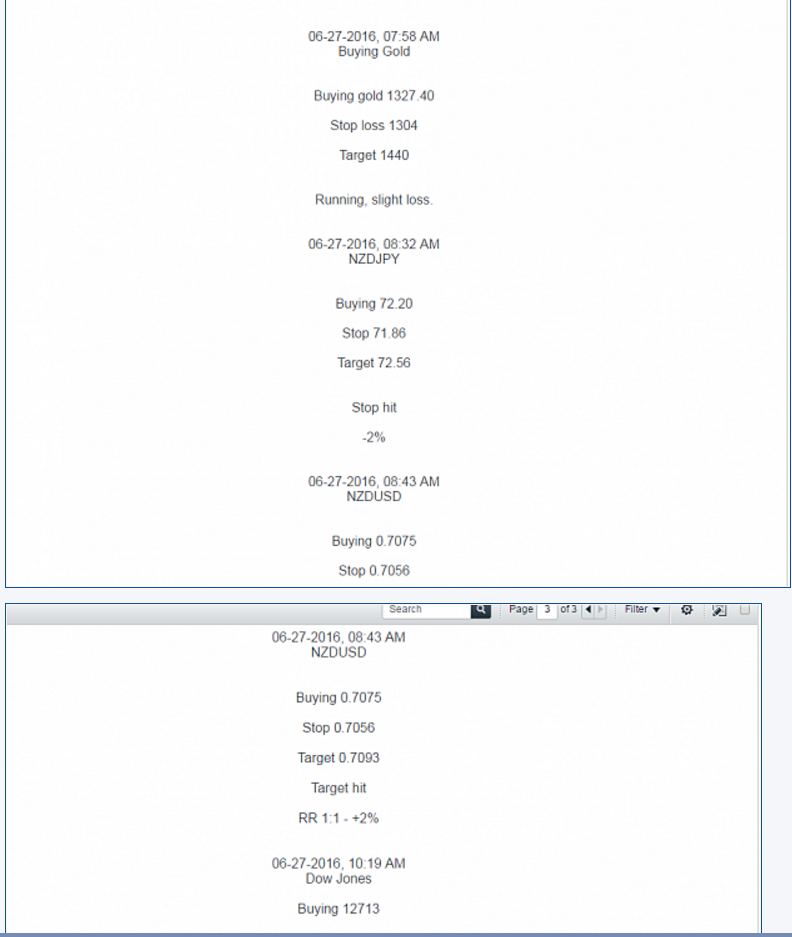 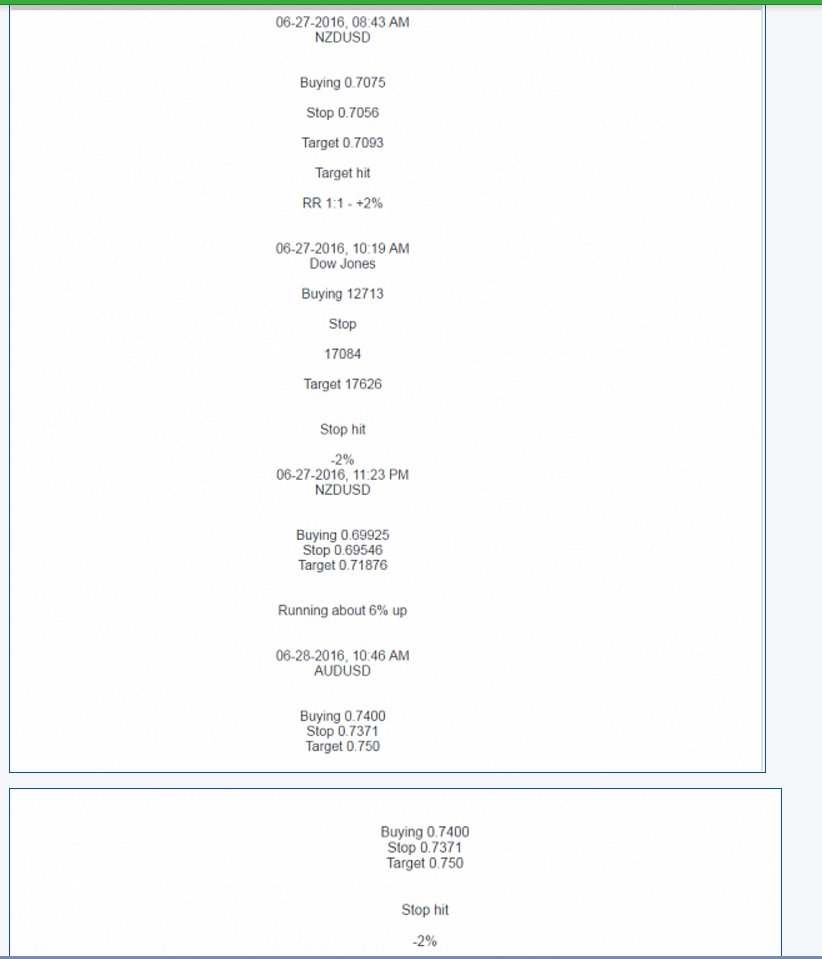 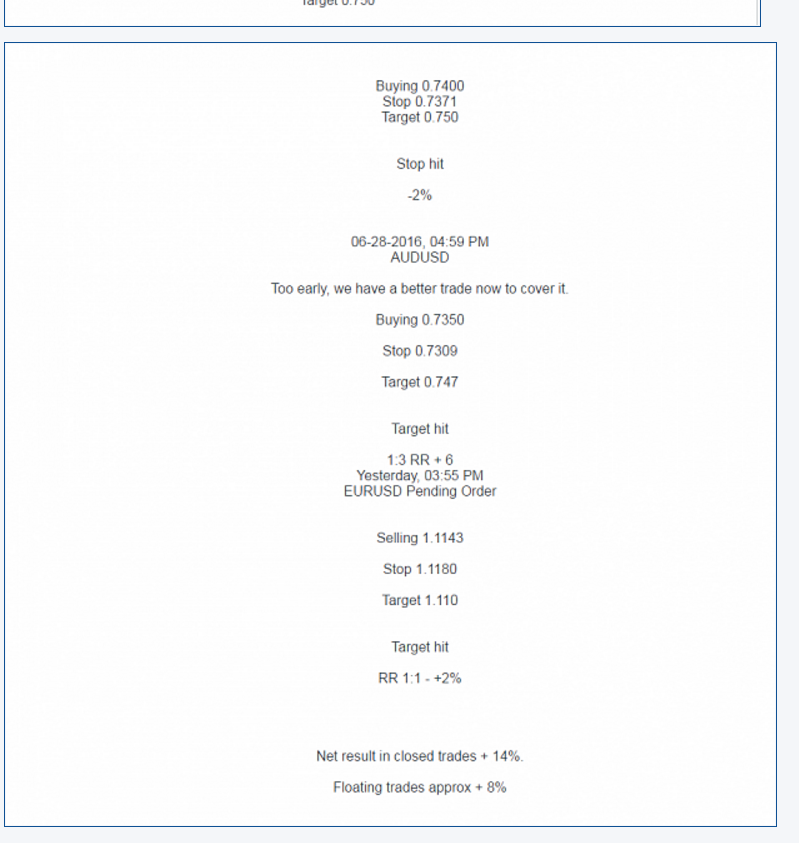 Magiic posted:
Good analysis, thanks for posting it :)

5starsignalspamm
Jul 04 2016 at 07:57
Biedrs kopš   184 ieraksti
I think we are going to see the majority of things that had spikes on Brexit and have been correcting soon end they corrections (with a little flurry) and make new high/lows.

Then we will see a proper correction.

We are on the verge of seeing a far larger crash in the British Pound.

Noteikumi  |  Privātums  |  Lapas karte |  Site Map Calendar
Latviešu
© 2023 Myfxbook Ltd. All Rights Reserved.
HIGH RISK WARNING: Foreign exchange trading carries a high level of risk that may not be suitable for all investors. Leverage creates additional risk and loss exposure. Before you decide to trade foreign exchange, carefully consider your investment objectives, experience level, and risk tolerance. You could lose some or all of your initial investment. Do not invest money that you cannot afford to lose. Educate yourself on the risks associated with foreign exchange trading, and seek advice from an independent financial or tax advisor if you have any questions. Any data and information is provided 'as is' solely for informational purposes, and is not intended for trading purposes or advice. Past performance is not indicative of future results.