GeorgeBischof
Nov 02 2020 at 11:08
Member Since Jul 19, 2020   318 posts
Crypto market is a risky market. So very careful to invest in this market. Many people lose their money in the crypto market.
Quote Message Report

TitusD
Nov 02 2020 at 11:37
Member Since Jul 25, 2019   10 posts
BTC looks much more stable now than it ever did and more like a real currency. I think that it will hover around the $8-15k mark for the foreseeable future. This would be good for BTC as the more stable it is the more likely it can be used as an actual currency
Quote Message Report

Hi all.
Remember what I’ve promised you last time?
The chart today is only one. The time frame of it is strange even for me but it`s really interesting. It`s a yearly time frame chart. Yes, I know it`s big but Bitcoin is a really long term game so let`s see it.
In this chart every candle is one year. The chart shows the price from 2013 till now. We can clearly see two similar patterns. The first one is from 2013 till 2016 and the second one is from 2017 till 2020. This two patterns are with the same structure and only the sizes are different.
* The first one is a big green candle which is the ATH at that moment.
* The second one is a red candle which is the macro correction.
* The third one is again a green one which is some recovery.
* The fourth one is the most interesting. This candle fully recovers the second one and also break out the resistance at that moment and… yes it leads to the next big green ATH candle.
Guess what`s missing nowadays? Did you get it? The fourth one. That`s why this year close is looking to be important. Right now we`re exactly at the line. We have almost 2 months and the momentum looks good at this moment so it`s very possible to see 100% repeat. The most important is to break out from this resistance level. How far is not so important but there`s two scenarios for me.
The left one is the realistic one (lowest history results and future projections)– closing this year at around $17K and next year an ATH at $100K.
The right one is the mooning one (average to high history results and future projections)– closing this year at around $24,8K and next year an ATH at $640K. Personally I’m not a fan of the moon one simply cuz if we close this year at $24,8K this will be an ATH by itself. There`s no sense of this and it`s ruing the model at some point.
Interesting right? I think yes so the only thing that I can say is: Merry Christmas and Happy New Year, fellas!
That`s all for now.
See ya next time.
Attachments:

Adamgylicrist
Nov 06 2020 at 06:41
Member Since Oct 19, 2020   38 posts
The BTC does look strong and even the charts are rightly put. The future of bitcoin seems to be powerful. Thanks for sharing.
Quote Message Report

Never invest more at one time than you would spend on a weekend of strippers and blow...
Quote Message Report

marco_mmbiz posted:
BTC seems strong over the 10k level. But it's still not a safe one...

Another one of my own thoughts from earlier today:
Attachments:

marco_mmbiz posted:
BTC seems strong over the 10k level. But it's still not a safe one...

Another one of my own thoughts from earlier today:

17k are hit. Now, let's have a look what will happen next. I just threw some arrows onto the chart again. We'll see... 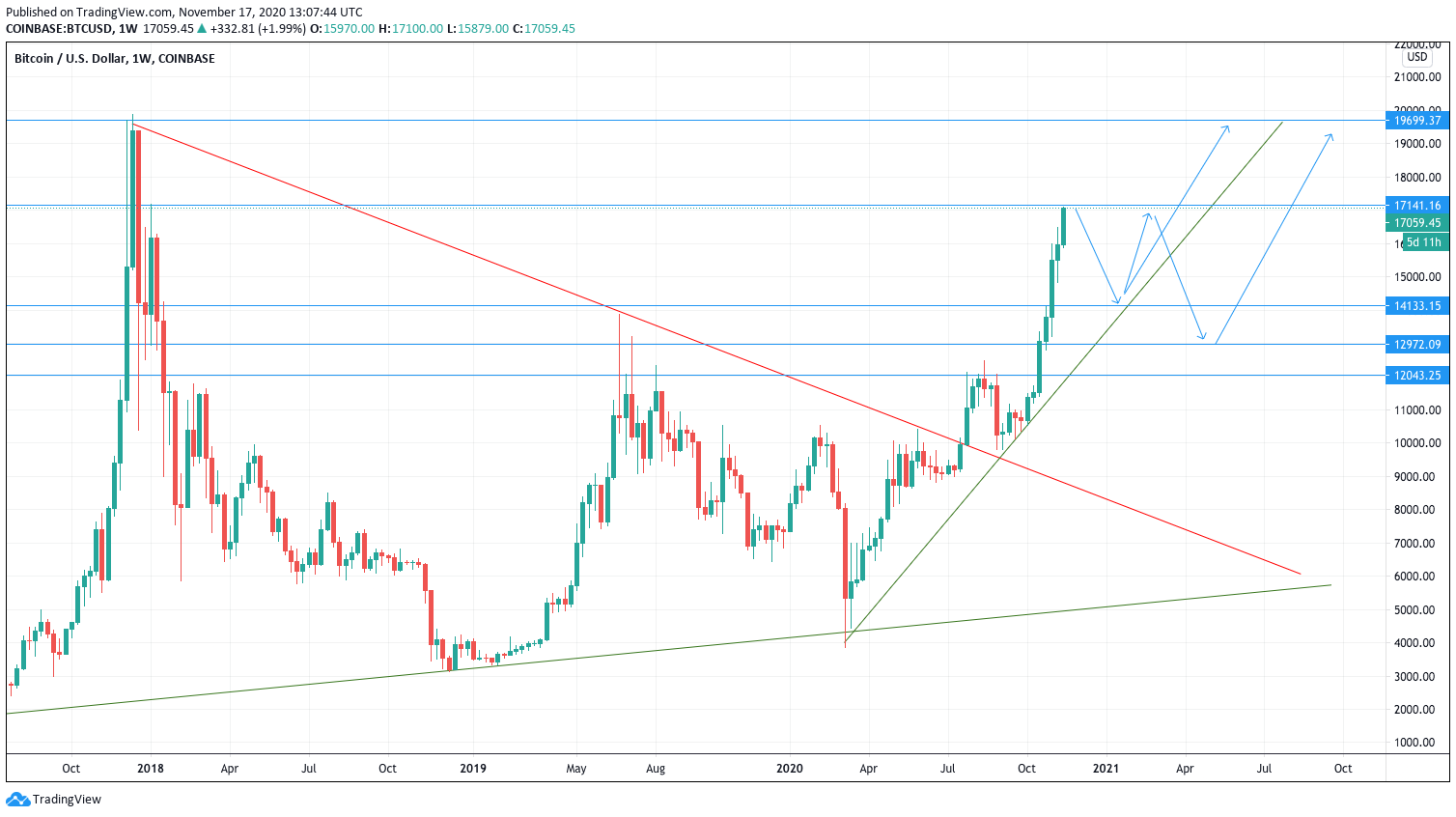 I agree with you. 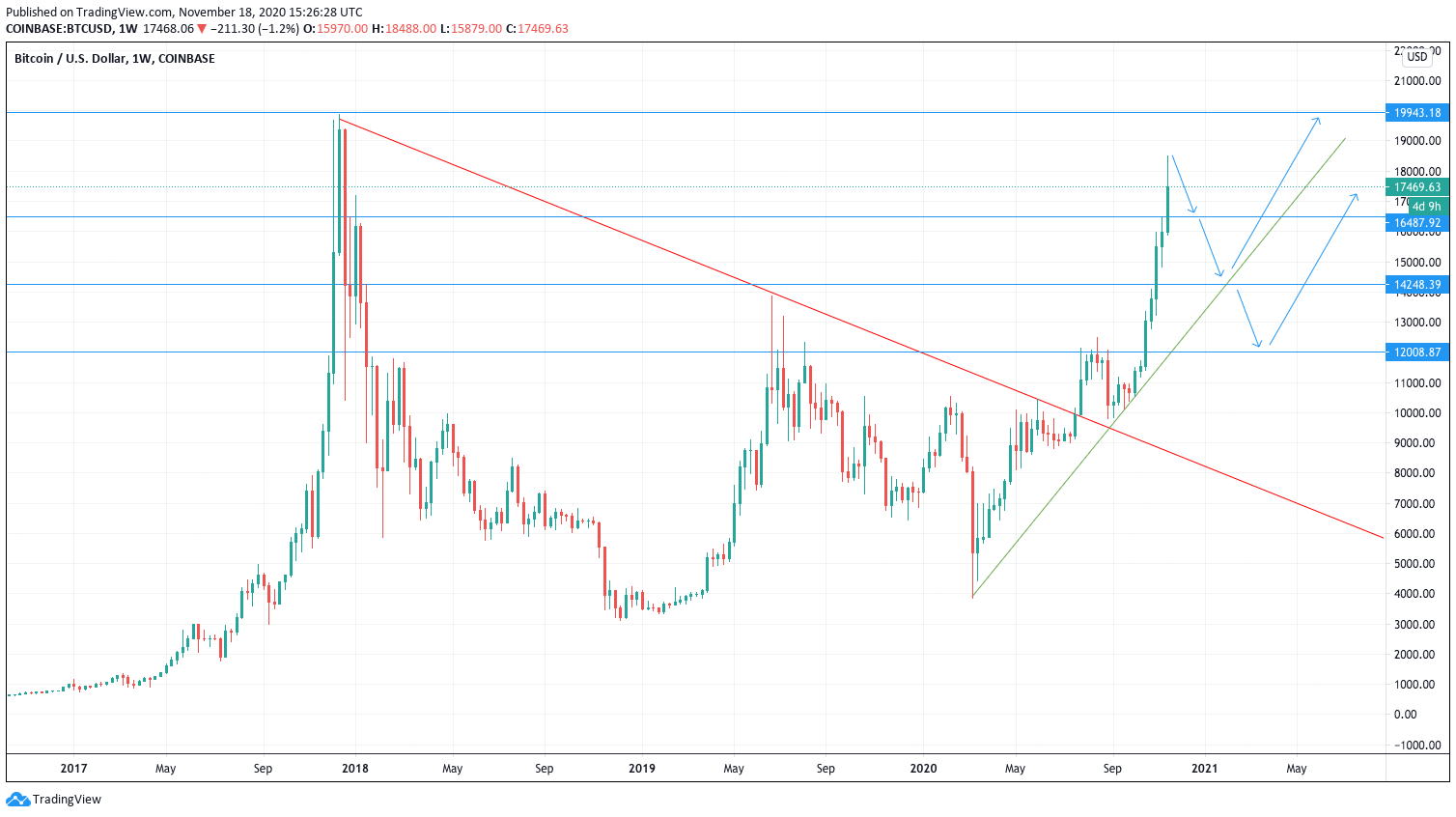 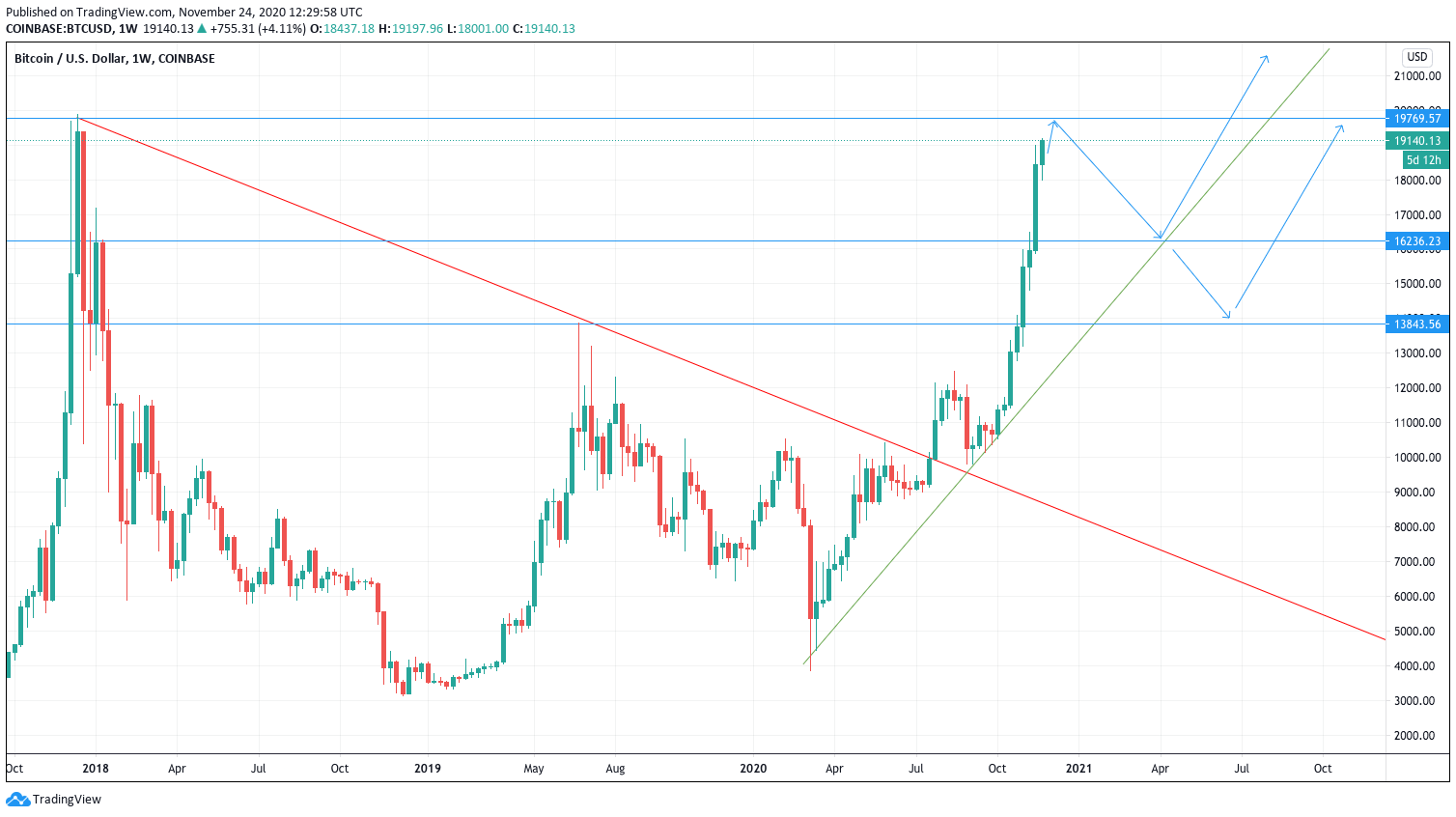 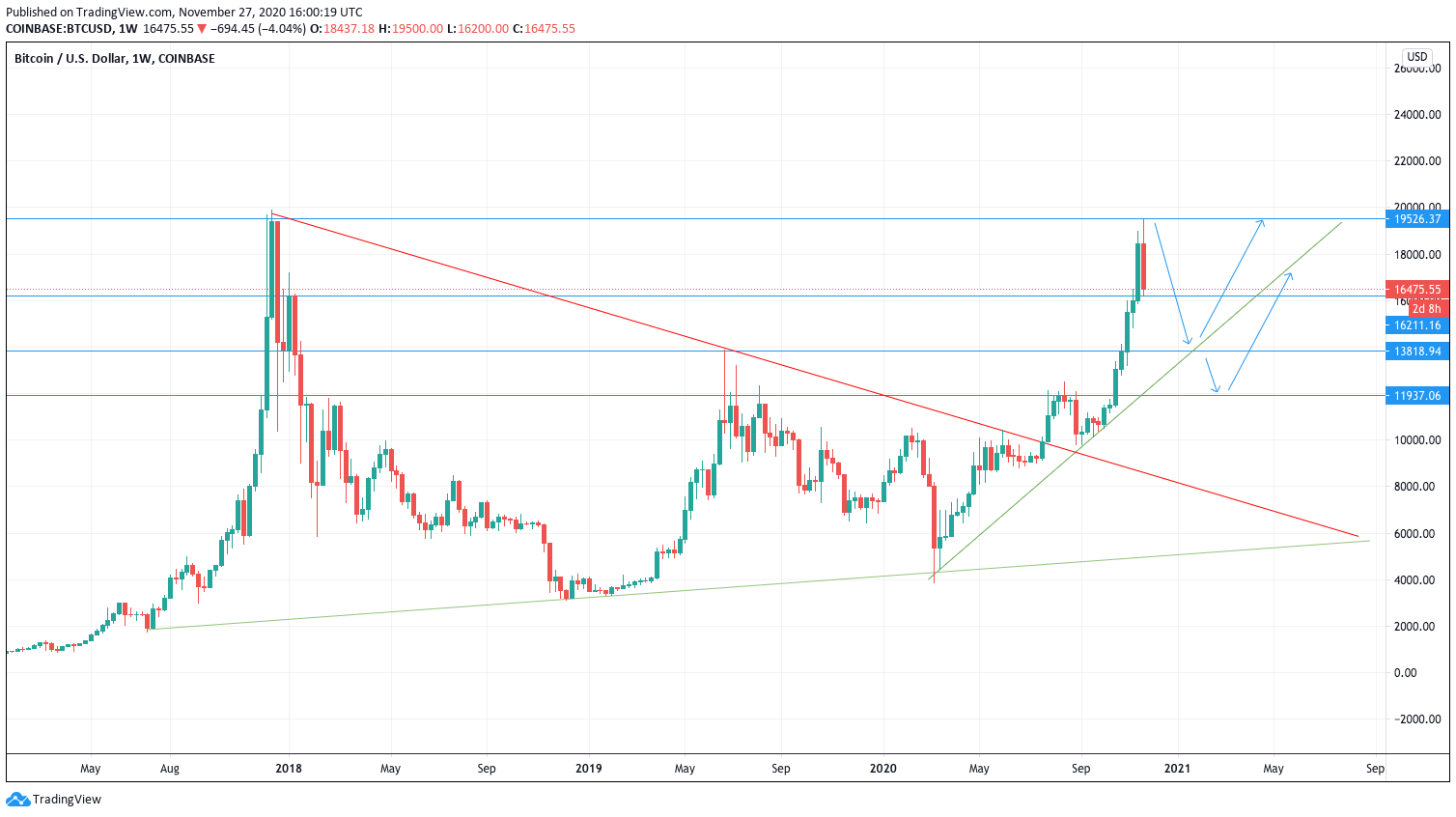 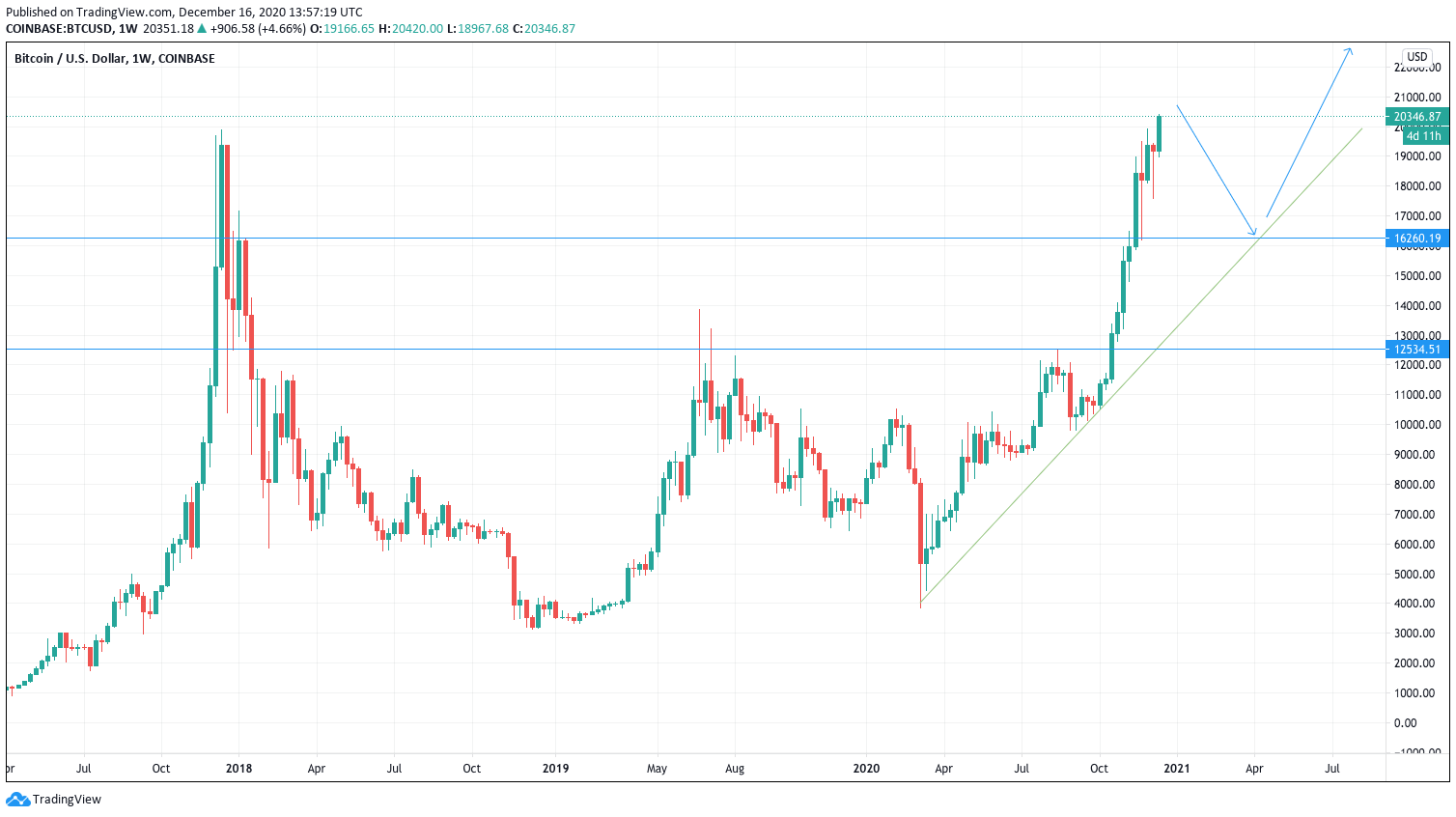 LyudmilLukanov
Dec 16 2020 at 17:29
Member Since Jul 23, 2020   869 posts
Bitcoin is kind of safe heaven right now. Still, investor should careful for some draw back.
Quote Message Report
Please login to comment .