what is biggest pip trade you have seen?

JDavda posted:
My biggest trade was 1700 pips shorting EURNZD. It was back in 2014 when the Euro was falling apart. The best part was that it was collecting a nice swap while I held for just over three months.

But it actually messed me up pretty bad. While it was one great trade, this was early on in my trading and set the wrong mindset for me. After that, I gave back all the profits and a significant chunk on top of that chasing 1000 pips trades. Since then times have changed and there is a lot more of this grinding type action in the markets. I find it much more tougher to get the big trades these days and now look for much smaller pips.

The only place I think you might be still able to get a good return with fair risk is in equities. Perhaps Gold if it does another leg higher, but timing is so important in these type of trades if you want to make sure your risk is controlled.

an interesting story of yours and a good post overall... The markets nowadays are tougher for everyone, scalpers and trend traders - everywhere including stocks, little value left in most of them. Mr Soros had a much easier life in the 60s... At the moment imho fx is still the best even if they cut rates like mad 😡... what about trends in GBP this year? - very juicy for a leveraged trend follower 😎...😉

what about trends in GBP this year? - very juicy for a leveraged trend follower 😎...😉

GBP is one of those few currencies that has been trending nicely. Not sure if it makes sense chasing it higher with GBP/USD up like 5% in Oct.. but certainly would look to get involved on a dip.

I'm not entirely convinced the political backdrop warrants further gains, but the technicals sure do look good.


If you don't stay humble, the market will make you humble
Quote Message Report

I don't know what happened in 2017. To this day that rally makes little sense to me. Luckily I didn't trade that pair much at that time, I would have been on the wrong side of that for sure. The last good trade I had in the pair was a short in April 2018 that I held till July I think... These are probably my best trades, but again, have had many losing trades in between trying to catch that trend and chasing big pip moves.

Probably should trade GBPUSD more.. it certainly trends better than EURUSD. I find a low risk position can often be put on at the European open or on a bounce at the NY open which could turn out to be a runner.

If you don't stay humble, the market will make you humble
Quote Message Report

JDavda (JDavda)
Nov 10 2019 at 11:13
Member Since Jun 18, 2013   8 posts
That chart looks good in hindsight but momentum is slowing in a major way. Which makes it hard to stick with a directional bias with conviction. There was more money to be had there on carry than direction.

I'm speculating that swing traders didn't do well in that pair. Anybody that sold breaks since the second half of 2018 would probably have gotten stopped out or faked out. 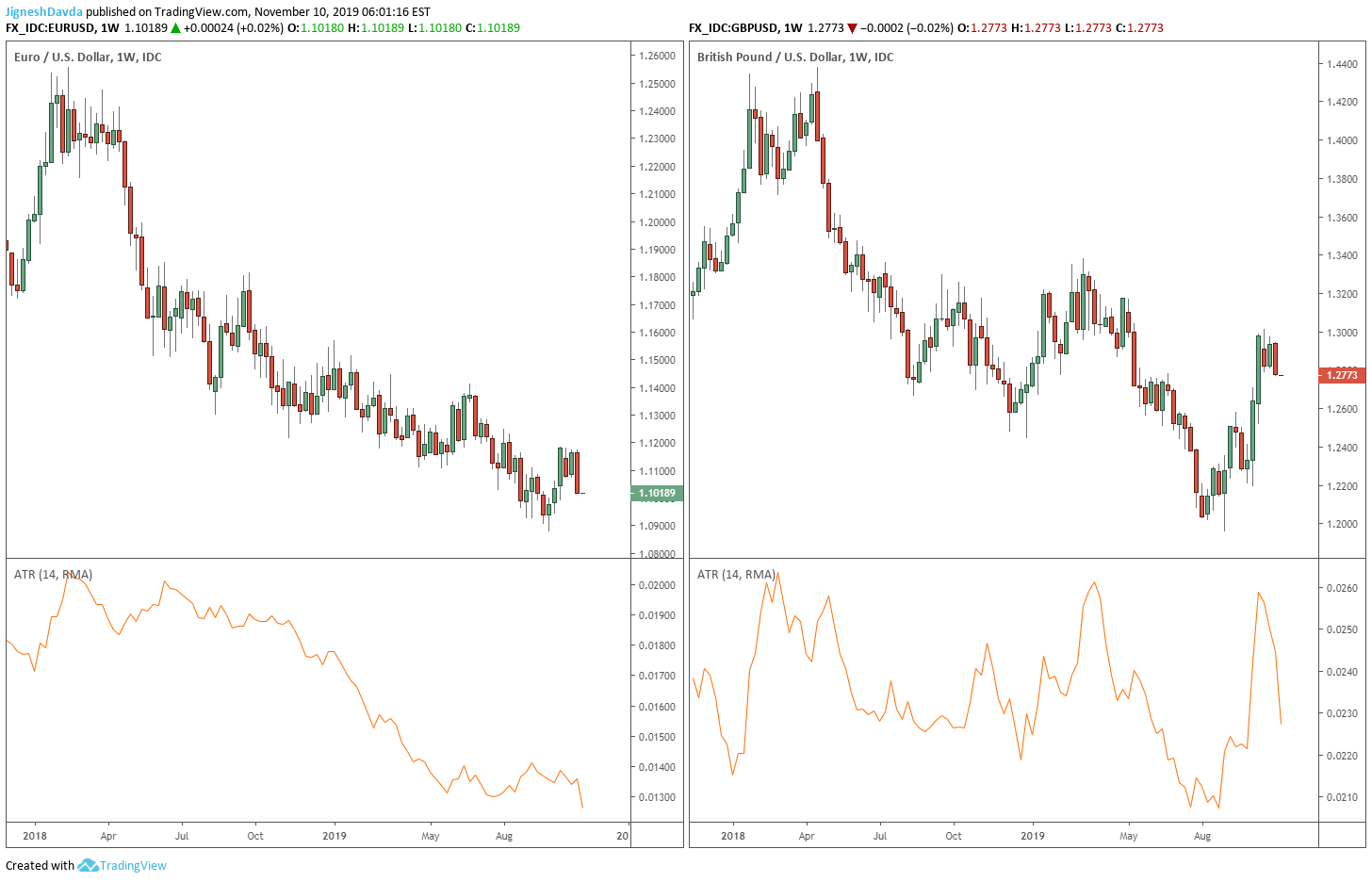 If you don't stay humble, the market will make you humble
Quote Message Report

tacet posted:
the carry here is in the right direction 😄 I've just started a new thread in the General (FA: the holy grail of trend trading) - contribute pls. We have to remember that FA > TA...😎

FA and TA should Both be given equal consideration for analysis, with a primary focus on Risk Management for the account.

To focus only on FA and ignore the information from TA is a massive mistake and is one of many contributing factors to people losing money in the markets.

To be profitable an investor needs to consider ALL available information and manage their risks appropriately.

If it looks too good to be true, it's probably a scam! Let the buyer beware.
Quote Message Report

rickyb
Nov 11 2019 at 02:49
Member Since Oct 23, 2014   82 posts
there is always some major pair combination that is in trend. my best was 800 pips with a 40 pip stop loss.in 3 weeks. gbp/cad. always like to be like a surfer;fall of with many small stop losses and catch a big one.;that pays for losses.one trick i do is once getting a trend is get to breakeven after 100 pips.i think the trick is using previous daily;weekly; and monthly lows or highs as stop losses.

Still holds the title of this thread!

To be profitable an investor needs to consider ALL available information and manage their risks appropriately.

a) As Michael Steinhart stated in a 2004 speech, among his top trading rules:

4/Make good decisions even with incomplete information.
It is a good idea to gather as much information as possible before entering any single trade, but the available information will never be complete or perfect. Investors need to be trained to work on the facts, figure out what does matter, and take the right trading decisions before all others gain awareness of the situation. They then need to have the courage to put sufficient money behind the trade to achieve a meaningful outcome.

b) 3. Have a Flexible Analysis Approach:
https://optimusfutures.com/tradeblog/archives/3-tips-to-trading-unpredictable-markets

c) Stack the odds in your favor:
https://dailypriceaction.com/blog/is-forex-trading-gambling/