CrazyTrader posted:
No it doesn't not!

The winner is the first one to reach 100% while DD is low. As a refere , we don't care about free margin, number of trades opened, or what so ever....

You should win this competiton with your wonderfull entry accurancy 0 pip drawdown!

You know when 2 boxers want to fight... they are not pussies, they meet up on the ring and they don't talk that much.

So Now if you guys are traders... fight on the trading area as both of you want to show they are stronger than the other.

Market opens in few hours now => Leave this thread in peace for 2 weeks and then we will see who win that dirty girl battle world cup.

Well said mate. That is what we will do.

dchara01 posted:
As for the 2nd point, I cannot agree that there is an actual difference, between the two accounts... Since you are not challenging for the higher ending balance, but for the highest ending % gain with the less % drawdown, using trades that are meaningful for which later will be able to provide explanations... the absolute numbers, ie ending balance, amount at risk and so on have nothing to do with the winner!

I guess I agree partially with your thinking on that. It's just that depending on the persons trading strategy, it can have a fairly large difference in the outcome.

If I'm incorrect, please clarify this for me. Thank you. - David 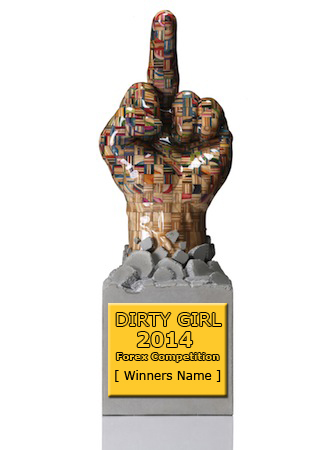 Shut up and trade.

CodeMonkey posted:
And still you're talking shit and claiming you can get 500%.

Shut up and trade.

I've proven I could trade noob cake. This is your first go around. Stop looking for excuses as to why you are going to lose. You've been the one typing your fingers away, and posting to every comment one leaves. Let's see how far it will get you this week and the following week.