close all trades upon $X profit

friscodad
Jan 15 2018 at 06:41
Member Since Jun 14, 2014   2 posts
trying to find a script that will automatically close all open trades in the account when the overall account profit for all current trades hits a specified threshold. Ideas?

I did this EA, dont know if is that what you are looking for.

It is a dual trailing, you can set the long trades or short trades, or all togheter with a few options. It is better than a close because you can let the trades run more into profit.

Note it is the very first version, check it in demo first.

Hope this help you

I did this EA, dont know if is that what you are looking for.
It is a dual trailing, you can set the long trades or short trades, or all togheter with a few options. It is better than a close because you can let the trades run more into profit.

Nice share. Thank you. When you have some minutes of your time avalable.Try to explain parameters briefly.
Trail Profit start @ 10$ and lock 1$...when reached 11$ ..lock profit is 2$ ...when reach 12$ ...lock 3$ ...since 1rst parameters are
10/1 ...did I understood well ?? What is the 'group' standing for ?? group of trade on the same pair ? or group of pair in a basket? . I am actually testing an EA which envolves several pairs ..all pairs involved are building their grid ...EA takes profit when overall balance of all grid trades reach 100$. Your EA might be an excellent add-on ...as it can trail profit. But built-in description
is confusing ... 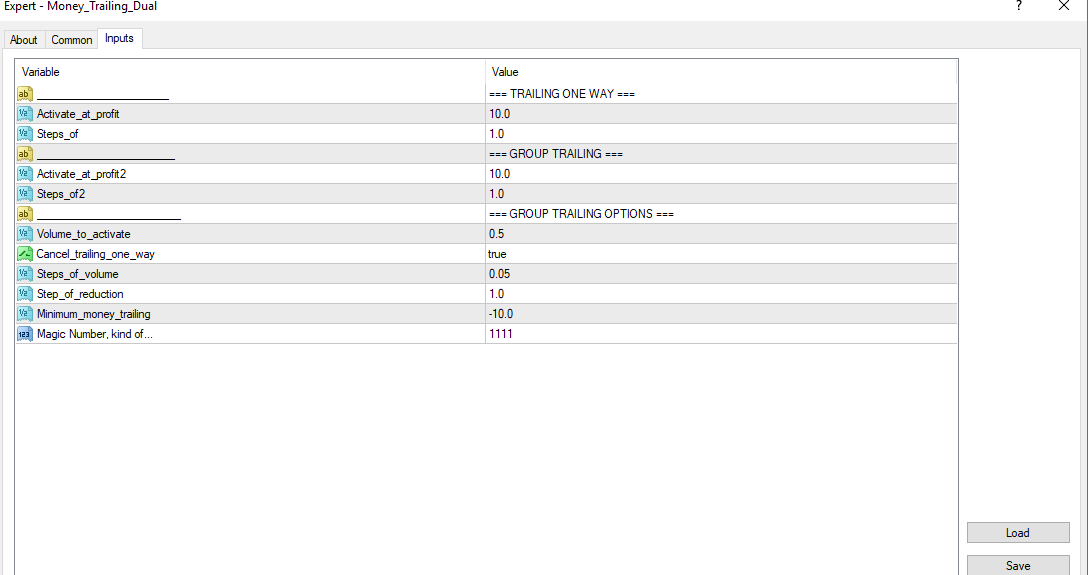 Sorry, i did it for a friend and never we never did any instructions. I´ll try to explain for you:

ONE WAY: Trailing the profit in all the pairs but only LONG or SHORT (independently)

GROUP TRAILING: All the pairs long and short trades
Volume to activate: Necessary volume between all pairs to activate the Group trailing (the SUM of all your trades)

Cancel trading one way: Just that, if Group is activated, one way trailing will be deactivated. One way will return to the activity when all the trade are closed.

Steps of volume: Every XX volume more (over 'volume to activate') the Group trailing will reduce the 'Activate_at_profit' with the amount indicated in 'Steps_of_reduction'. It will be reduced to the maximum indicated in 'Minimum money trailing'

This was done for a grid EA, sometime (many times) is getting complicated and he wanted to settle for less profit or even lost in exchange for closing all and leaving the mess.