salvozaur posted:
Without any question cAlgo is the futre of EA trading , and Metaquotes with its attitude just put the first nail in its own coffin.

cAlgo looks promising on paper but reality is that we need more brokers providing that platform for us.
IMO most brokers won't bother to offer 2 platforms for their customers - at least those brokers that prefer loosing customers.
Lets hope that cTrader/cAlgo brokers are after commissions and not more loosing customers.

Nobody seems to be using this platform nowadays so its impossible to know how good it is in real life.
And other issue is their backtesting abilities - of course they can not be worse than MT4 offering ;)

This issue is worth of its own thread!
Being Bearish or Bullish Makes No Difference
Quote Message Report

Andrew (slipshod)
Jun 01 2013 at 18:58
Member Since Nov 15, 2011   4 posts
As much as I'm starting to like cTrader/cAlgo, backtesting is actually its major drawback right now. You can't load your own data, and they don't provide a very long time period in their charts - only 1 year for H1 candles and a couple of months for M5. Its very risky writing an EA with so little data to backtest it with & hope for decent results going forward. I don't know why they designed it this way, and I really hope its addressed soon.
Not dead yet. Can't quit.
Quote Message Report

Master_Kiwa
Jun 02 2013 at 21:12
Member Since Apr 14, 2013   402 posts
Hello. I have downloaded the recommended file in order to have my stats tracked. Yet, none of my brokers appear in the box. I have at least 6 different brokers on this machine. I even went to select my broker Manuel , and nothing occurs. Could someone please help me with this issue. Thank in advance.
Focus on pip-drawdown
Quote Message Report

Cirilo Arango (acostafulano)
Jun 03 2013 at 04:49 (edited Jun 03 2013 at 04:55)
Member Since Jul 07, 2011   5 posts
Hello everyone, I'm experiencing problems with updating (llooking for an alternative since auto-update died), but still have no explanation or solution. I've searched and read but haven't found any similar cases.

I have several platforms running (6), tried the EA and publisher in all of them but only ONE is working... They are all running side by side, proxy server disabled in all of them, all installed at the same time, etc.

I'm behind no firewall, and have disabled my connections proxy server as well. All builds are build 500. 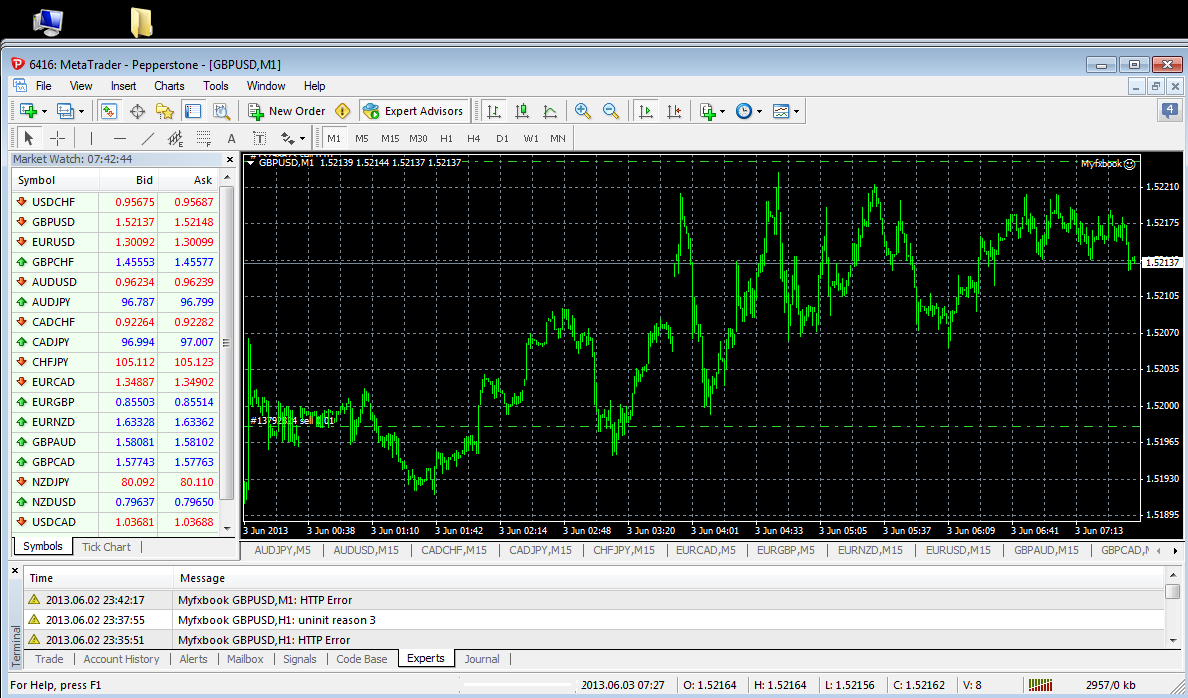 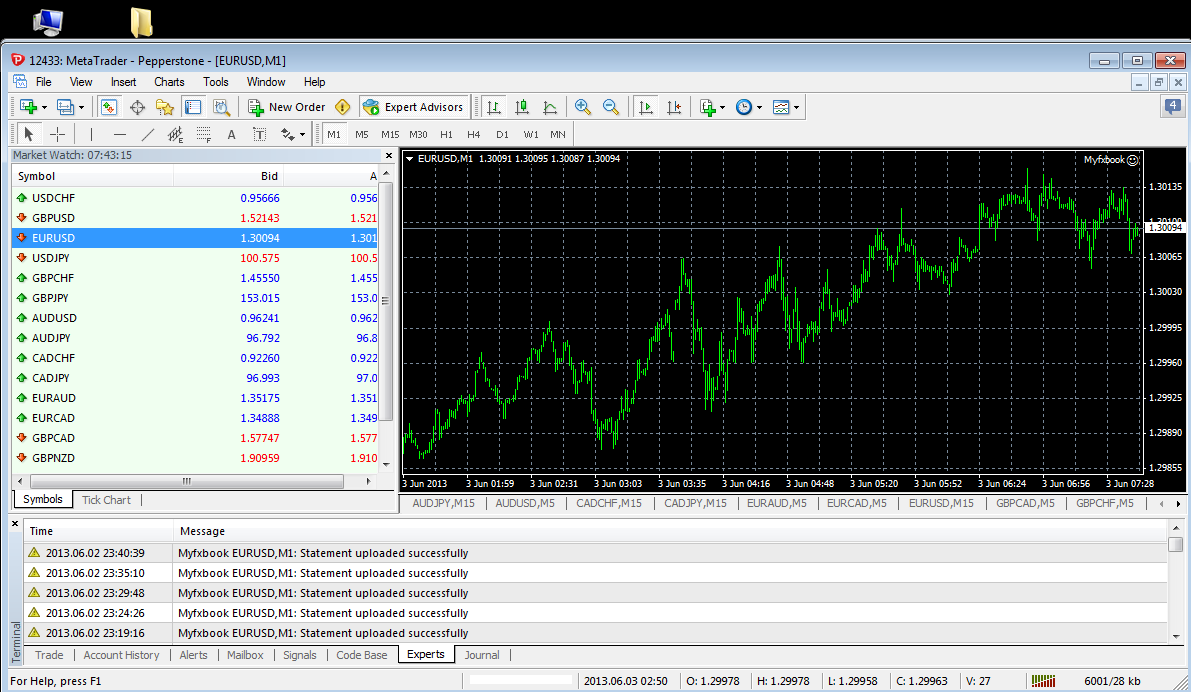 Why would the EA correctly connect to myfxbook in one instance but not the others?!

When I try the 'working' platform and try to update one of the accounts I normally trade on the non-working ones, it doesnt update! maybe the problem is not the platform's but the accounts'?????

"The game of speculation….is not a game for the stupid, the mentally lazy, the man of inferior emotional balance, or for the get-rich-quick adventurer. They will die poor.’ Jesse L.Livermore:Reminiscences of a Stock Operator’,1923
Quote Message Report

As a part of our active efforts to improve MetaTrader 4 system, we are starting to upgrade the network protocols and block all services based on the hacked versions.

We urge you to cease any cooperation with ZuluTrade, Tradency, Tradeo, Myfxbook and other companies that use the hacked protocols violating our rights.'

I don't know where to start in criticising this response from a supposedly serious and mature international company. But, to pick up on a few of the more ridiculous complaints:

1/ I am not sure what 'hacking [our] network protocols' means, but I presume their objection relates to the use of anything other than the MT4 terminal application to interface with the MT4 server. This is the equivalent of Microsoft stopping anyone using anything other than Outlook to access Exchange Server for email, or of Google stopping anyone using anything other than the gmail web interface to access gmail - so anyone using the iOS native mail app, for example, would be out in the cold. It is an extremely common practice and generally regarded as beneficial to everyone concerned - let's be clear, people aren't using these services to affect or damage MT4 Server, just to manage their own trading data via a different front-end.

2/ MQ accuse 'third party developers' of violating EULAs which MQ has with brokerage companies. This makes no sense - the EULAs are a contract between MQ and the broker; the developers are not party to that contract so on what basis are they supposedly required to abide by its terms? No privity of contract. Does MQ have no lawyers?

3/ Arbitrary list of companies who are designated by MQ of being in breach of some ill-defined rights which MQ asserts have accrued to it. Having publicly accused those companies of breach of contract and of 'hacking', which in many countries is a criminal offence, MQ had better be confident it can stand up those allegations in court as, otherwise, I would expect those companies to be discussing with counsel the extent to which such allegations are libellous.

It's the approach and language of the Wild West, and it is this sort of thing which leads to the 'dodgy' reputation retail forex trading has with regulators the world over. An ill-conceived and ill-executed (the 'official' MQ alternative is not slated to arrive until Q4) attack on its customers, eco-system developers, and users.
Quote Message Report

bch159 posted:
2/ MQ accuse 'third party developers' of violating EULAs which MQ has with brokerage companies. This makes no sense - the EULAs are a contract between MQ and the broker; the developers are not party to that contract so on what basis are they supposedly required to abide by its terms? No privity of contract. Does MQ have no lawyers?

That's true until you install MT4 on your computer. By doing so you also accepted EULA.
Quote Message Report

But I'm concerned how this affect us on short term and on long term.
We have seen how this affects us and other parties now and that has not been good so far.
And until MetaQuotes puts its cards to the table we can't know what long term solution they are planning for third party service providers (like Myfxbook etc.).
Any solution will be good (as such) because then we have official way to do things (or not to do at all).
And in the mean time we will be confused and wondering what to do and trying to find out reasonable workarounds, or just wait and see.
This has been good lesson to show how dependant we are from one technology provider.
Being Bearish or Bullish Makes No Difference
Quote Message Report

MyFxBook is a great site metaquoetes have no right to destroy service of others.
Quote Message Report

"The game of speculation….is not a game for the stupid, the mentally lazy, the man of inferior emotional balance, or for the get-rich-quick adventurer. They will die poor.’ Jesse L.Livermore:Reminiscences of a Stock Operator’,1923
Quote Message Report

FXsecret
Jun 05 2013 at 10:35
Member Since Sep 06, 2010   8 posts
It seems that the EA INSTALLER doesn't install the files when the folder is on the root' c:\\metatrader\' . My sustem is windows XP SP3.
So I installed the two files manually( myfxbookea.ex4 in expert and myfxbookea.dll in the libraries folder) but it doesn't work and my results aren't updates( My login and password are ok..) Hope it can help to resolve problem.

Carlos_FX
Jun 07 2013 at 11:24
Member Since Feb 21, 2012   1 posts
After changing to EA, my data are incorrectly displayed by myfxbook.
'Gain', 'Abs Gain' 'Drawndown' and others are displaying freaks data.
I use 'custom start date' (in several real accounts) and this seems to be the cause of the error.
Accounts without the 'custom start date' are correct.
This will be fixed?
Quote Message Report
Topic is locked