Sign In Sign Up
Calendar
Sentiment
Calculators
Open an account with XM Group
To use chat, please login.
Back to contacts New Message
Would you like to receive premium offers (available to Myfxbook clients only) to your email?
You can unsubscribe from these emails at any time through the unsubscribe link in the email or in your settings area, 'Messages' tab.

USD consumer confidence is down and yet price of EUR/USD drop?

Cryptocurrency (Cryptocurrency)
Feb 13 2017 at 18:23
Member Since Feb 22, 2015   178 posts
USD consumer confidence is down and yet price of EUR/USD drop?
Shouldn't the EURO rise in price instead of a drop in price?
Attachments:

stian
Feb 13 2017 at 22:37 (edited Feb 13 2017 at 22:41)
Member Since Nov 14, 2015   325 posts
It was mainly democrats dragging the confidence down (while republicans stay around all time positive), Trump promise tax cuts and more deregulation witch is positive, Le Pen is dragging the euro down with her French exit from the eurozone. Eyes on Yellen who could build, or kill the march rate hike hopes.

USD did fall on the data too. about 0.4 on the dollar index, which is significant.

Cryptocurrency posted:
USD consumer confidence is down and yet price of EUR/USD drop?
Shouldn't the EURO rise in price instead of a drop in price?

pgfritz (pgfritz)
Feb 21 2017 at 07:57
Member Since Aug 05, 2016   8 posts
It is surprising to see how political issues completely influence the market. And as the euro is affected by various factors, the euro is definitely not at its best.

pgfritz posted:
It is surprising to see how political issues completely influence the market. And as the euro is affected by various factors, the euro is definitely not at its best.

Certainly the euro is not your best time, I agree with you pgfritz.. 😄

TiffanyK (TiffanyK)
Feb 23 2017 at 11:33
Member Since Feb 12, 2016   427 posts
I think the EURUSD pair became even more unpredictable after Brexit, Elections, Trump… All these really major political changes led the pair to some big up and downs. You cannot always expect the currency to drop or rise because of certain major news. Just the pair to become more volatile. 😄

proyecto (proyecto)
Feb 27 2017 at 15:04
Member Since Oct 31, 2016   36 posts
Today the EUR / USD pair is trading at half session. Not that the euro is stronger, but the dollar is weaker. This may be related to the squaring of positions ahead of President Trump's first major speech before Congress this Tuesday.

However, investors are still reacting to last week's Federal Reserve (Fed) minutes, which were less flattering than expected on the rate hike in March. US Treasury Secretary Steven Mnuchin also contributed to the weakness of the US dollar last week when he said he hoped Trump's tax reform plan would be approved by Congress before its August recess.

Traders have been discounting Trump's plans for economic growth, however, it seems that all of its plans - including increased tax spending, tax reform and regulatory easing - will likely be postponed until later in the year. 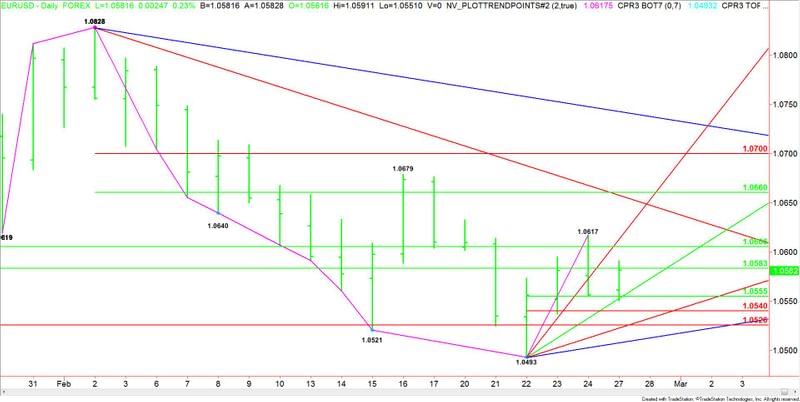