Anyone who trades more than 15 currency pairs at a time?

TheCyclist posted:
And hedging by the way is a fallacy. Very few people I know can keep a fx portfolio hedged. Open a long eurusd and a long usdchf to the same value and see what happens to your NAV...

I agree that it would be hard to do with multiple currencies if you are doing it manually. But using a properly written trading bot, it's not hard to keep the hedge trades properly balanced out. That is a major reason why I use an automated system, it can do all the hard calculations in real time for me, so I don't have to worry about things like that.

I trade 28 currency pairs using a system based upon multiple time frames, trending, spread and a few other things. To do that for 28 pairs manually would extremely difficult. But using an automated system, it's pretty trivial actually.
Viva La Puerto Rico!
Quote Message Report

That's really funny.
So your system/style only works for one or two pairs ?
That's a flawed system.

tolgupde posted:
Anyone who trades more than 15 currency pairs at a time?
If yes what are they and do you usually win or lose? I would like to hear from you.


forexalertsystem posted:
easy to spot a newbie, they want to trade everything at the same time....
LOL Fast way to be good at nothing and lose your account....

It is flawed logic to assume someone is a newbie trader based upon
the number of currency pairs they happen to be watching.


If a trader has a strategy that works on multiple currency pairs profitably,
and if the trader is happy with the growth rate of their account, that
doesn't qualify them as a newbie. I would say the person is smart and
trades with an effective multiple currency strategy.


For example:
A trader decided that they will trade 3 currency pairs. EURUSD, GBPAUD, GBPJPY.

They also decided that they are using a simple moving average crossover strategy, with SMA 20, and SMA 100.
The trader would then have to sit there and watch their charts waiting for the crossover, and hope they
do miss the crossover event.

To increase the efficiency of the trading strategy, the trader might decide to automate their system.

It isn't very difficult to create an automated trading system that can analyze
a large number of currency pairs according to a strict basic set of rules.

The system can then either automatically place the order for the trader, or the trader could be notified
by the system of the opportunity that it has found.

The trader might also take into consideration the account balance, equity, spread, volume,
and a few other things which could determine the maximum number of positions to have open at once.

Simply because there are 30 pairs being analyzed, does not mean the trader is going to open 30 trades all at once.

CodeMonkey posted:
The trader would then have to sit there and watch their charts waiting for the crossover, and hope they
do miss the crossover event.

I realize I made a mistake above.

That should have said:

and hope they did not miss the crossover event.

joopbuis
Apr 06 2014 at 13:25
Member Since Jan 14, 2012   4 posts
My system needs a lot of trading pairs because before entering a trade it evaluates current trades win/loss position and will not enter a trade is a correlated trade is already in negative territory.

Also if a trade goes against the system it will use the same correlation table to find the best hedging pair to limit losses.

This trading sytle won't work if you only have a few pairs to choose from.
Sometime the strangest pairs will hedge each other for a given day.

I do not say that every pair is traded as activly as the next so saying 'i am trading 28 pairs' is more 'i am monitoring 28 pairs'.

Jayakumar (Jayakumar)
Apr 07 2014 at 06:21
Member Since Mar 19, 2014   5 posts
Its better to restrict your trade to few pairs...then only you can feel the pulse of the particular pair and understand the trend. I watch only EUR/USD and able to predict the trend
Making profits in trading is not an one day wonder...its about consistency and how you control your mind...
Quote Message Report

That's not true, by trading more pairs you diversify the risk and you can hedge different pairs.
I am not talking about some manual trading but about automated experts running 24/7 on dedicated server:)
Quote Message Report

Are you manually trading or using an automated trading system?

Trying to trade approximately 30 pairs manually would be a considerable task, doing it via automated methods is much easier.
Viva La Puerto Rico!
Quote Message Report

Jayakumar (Jayakumar)
Apr 09 2014 at 07:55
Member Since Mar 19, 2014   5 posts
I trade manually....automated trading is always risky...its my view
Making profits in trading is not an one day wonder...its about consistency and how you control your mind...
Quote Message Report

Do not take it as an offense

You have 1 account here on myfxbook, which is one month old.
Are you sure you can make such statement as you did:)
Quote Message Report 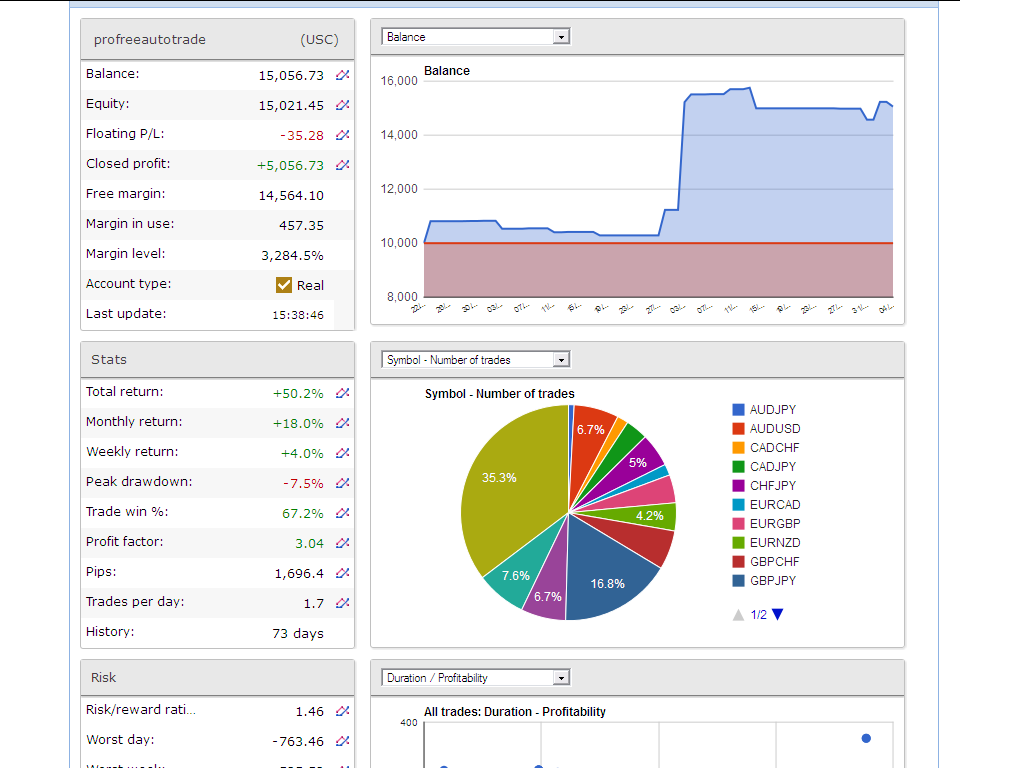 TheCyclist posted:
I trade 24 and if you're doing those amount of pairs it's not usually predictive trading. So the questions is more or less irrelevant. You'll only do it to win, but not by pair. By portfolio.

I think it also depends on the trading style (Scalping, day trading, swing trading).
The longer the time-frame, more pairs can you trade because you have enough time to concentrate.

"I trade to make money not to be right."
Quote Message Report

Do not take it as an offense

You have 1 account here on myfxbook, which is one month old.
Are you sure you can make such statement as you did:)

I did not take it as an offense...thanks...i want to make some decent profit with this one account...lets see..if iam able to show good profits for 1 year....my expected target is 120%...lets see :)
Making profits in trading is not an one day wonder...its about consistency and how you control your mind...
Quote Message Report

forex alert system (forexalertsystem)
Apr 09 2014 at 12:55
Member Since Apr 21, 2013   101 posts
Our system can easily trade all the pairs on the forex, but again its more risk, because not all spreads on all pairs are equal. and buy trading to many pairs your basically trading the same pair in a different configuration. your just setting your self up for a large loss from a single event. like news or something. for example our live system has placed over 1,000 trades in the last 2 months. thats about 500 trades per month and that's just on 1 pair. there is plenty of opportunity on a single pair for a properly coded System or EA.

See Statistics on amount of trades and accuracy on this system below
https://www.myfxbook.com/members/forexalertsystem/c-1-live/843495
Quote Message Report

The question is if it is more profitable and less risky than single currency.
I would say yes it is based on my experiences.
Quote Message Report

Advantages:
You feel better the way this particular pair is moving
How it reacts to news
How intense is the Price Action

Drawbacks:
Missing other opportunities being to specialized
Quote Message Report

Hello, lets agree with one thing.. you cannot predict trend, prices are chaotic, what you need is a solid strategy and then discipline with using the correct money management. So with that said, the strategy should work on all products, so if eurusd or usdjpy is flat then trade a setup on xauusd or euraud, just dont have too many positions open, such that if usd news comes out and burns a hole in your pocket.. always prepare for the next three steps / losses / entries, all the best , jaypipin

We are all faced with a series of great opportunities, brilliantly disguised as unsolvable problems - John W Gardener
Quote Message Report
Please login to comment .