Which ECN broker is best for Scalper EA’s

This is from the opening of this week. Differences in the time of about 3-6 seconds, the differences in the number of ticks in a minute ~ 12 pieces.
Front -> live; background -> demo.
I have an average of about 130 mS TTL, ECN server in Chicago.

This is from the opening of this week. Differences in the time of about 3-6 seconds, the differences in the number of ticks in a minute ~ 12 pieces.
Front -> live; background -> demo.
I have an average of about 130 mS TTL, ECN server in Chicago. 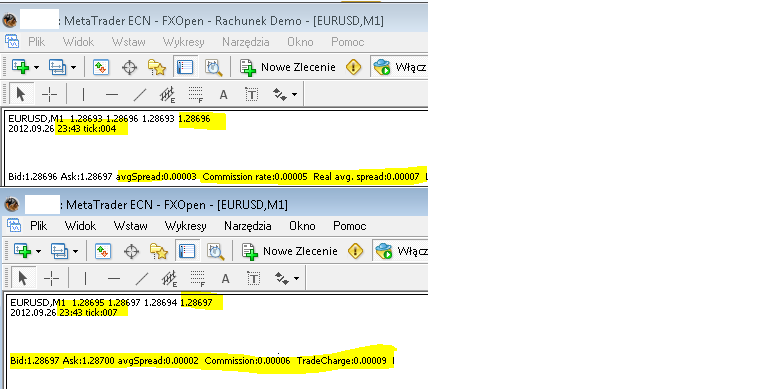 
thanks for the material.
+vouch for you ;)

nevercaughtup (nevercaughtup)
Oct 03 2012 at 17:40
Member Since Aug 22, 2012   11 posts
Mike, it took me a little while to digest your work. I knew there was something there I needed to grasp, but in my 60s I am not the brightest Crayon in the box any more. The data you collected from the once a week event when the brokers first open for the week leaves me with more questions than answers.

Aside from the latency do the liquidity markets generally open that far apart from each other every week on most pairs? If so the matrix of pairs times the gaps would indicate a trader with the correct automation could make his weeks income in those first few seconds of trading without taking risk via the arbitrage 'IF' they were the fastest. I would assume the number of contenders competing electronically for those pips must be huge which I think would compound the delays as all of those arbitration programs battle simultaneously for this 'free' money at the gun.

As you can see, the program will offer demo accounts to encourage people to open real account, this is one big scam and fraud. Brokers often provide, for example, demo account on a server faster than the primary server that supports real account. Use this, for example, geographic co-location of servers. Such a condition often attracts to take advantage of the difference in time.
That's why you often hear that a customer throw, if they suspect the use of all kinds of copiers, or programs by exploiting the differences in latency servers.
This is an example from my PC.

After submitting the film to the broker:


I received this response:

'According to you video, please be advised, that Live ECN and Demo ECN can have and most of the time will have different quotes. Demo server is just as much a testing ground for us as it is for you. For instance, before introducing a new liquidity provider to Live environment, we usually add its feed to Demo server. As we get satisfying performance from it, it is added to the list of liquidity providers to the ECN Live server.
This is a common practice across the industry to have slightly varying prices; this situation is well known to EA developers/users.
'
To the time differences, but silence.
Explanation smooth, but I think that worked there, I'd like answered :)
It turns out that it was a testing ground for the broker, not the client.