Sign In Sign Up
Calendar
Sentiment
Calculators
To use chat, please login.
Back to contacts New Message
System User's Page

Sorry for the gap in trades. Todays trades were the first for over a week (which has included holidays).

Gold Trader is designed to pick up over-sold conditions and gold over the last week has shot up over $100 without triggering a trade.

Fortunately a trade came up today and the gap from Monday morning open was partially closed.

Will wait to see how the rest of the month plays out. The situation with Iran/US has seen a lot of money move from currencies to gold (as a safe haven). Plus December, January, February and August are historically good months for gold.

Thanks for your patience folks and all the best,

any possibility to direct copy your trades?

It has been a crazy end of December and start of January for Gold.

What I have found is that the Gold Trader strategy picks up more trades when the market is ranging or consolidating as the big moves are missed. 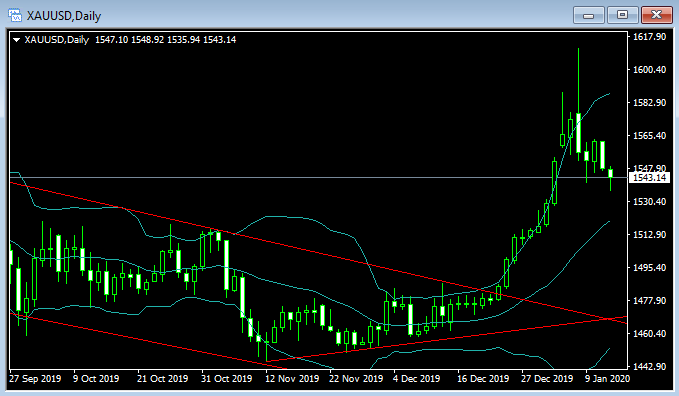 Has been a sideways move over the last 2 weeks after that massive move up and consequent sell-off.

You can see a new bullish trend-line formed and could see some bounces off this and then would expect a move back to the previous recent highs over coming months.

Feel free to get back to me with any comments, feedback or questions. 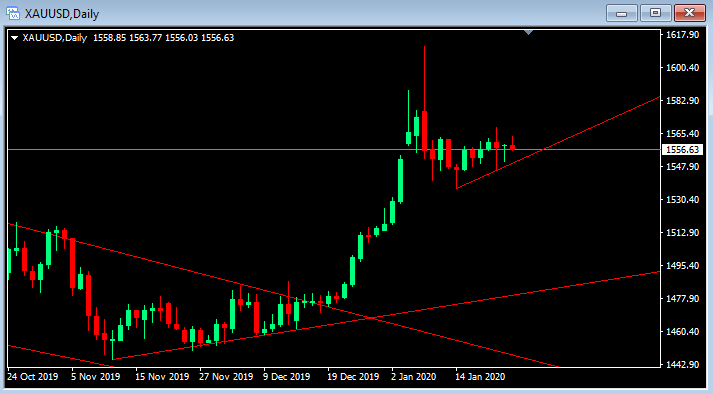 Sorry, I turned off the system early last week as I always do not trade on the last few days of the month. Plus we had the Brexit event that I thought could impact the markets. Also, I had a couple of days R&R so prefer to be around when the Gold Trader system is live to monitor.

Will be cautious on Monday as Gold had a strong move upwards on Friday. Plus normally the first week of the month is a bit edgy in anticipation of the NFP.

Last week we saw a nice bounce off the daily trend-line which is a good sign for the gold bulls.

We have just had a huge sell-off on Gold and am sure some of the gold bulls out there would have had their fingers burnt. 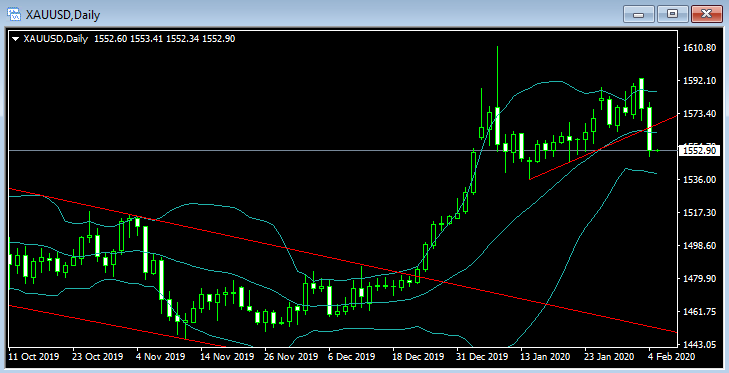 The Technical people would be saying the bull run is over and with the daily trend-line break we can expect either a bounce off the back of the trend-line broken and then downside, or a continuation down after break.

The Fundamentals will be saying it was a sell-off and bullish trend to continue.

I am between the two at the moment and am waiting for a break above the broken trend-line back for normal continuation.

We are at a delicate point on the gold daily chart. 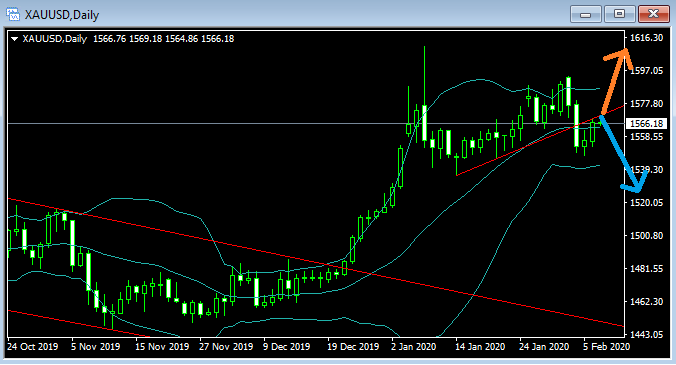 The major sell-off broke the bullish trend-line and the price has since come back up to the back of the broken line.

What we now see is a tipping point between a bounce off the bottom of the trend-line to head much lower, or an alternative break of trend-line for continuation of bullish trend back up over the 1600 mark.

Today (Fri) we have the Non Farm Payrolls and analysts are expecting an improving, which will put downward pressure on the gold pairs, especially XAUUSD. However, there may be a surprise and if the NFP is less than expected would be very interesting to see how gold chart reacts. All I know is that today some traders will make money, and other traders will lose money! Gold Trader does not generate trades on Fridays, a conscious choice to pause as Friday is commonly a volatile day and also often includes major economic announcements.

Will be a very interesting next couple of days and would expect a move in one direction or the other. A sideways move is less likely.

We have not seen a break above the recent trend-line on the gold chart so have revised the trend-lines to include a lower bullish trend-line...

What I suspect is that we are going to see some channeling between these two lines and then at some point a break of either the upper or lower line. This break is building in momentum so when it does occur we can normally expect a decent break.

The Gold Trader strategy (https://www.myfxbook.com/members/camerongill/gold-trader/3398307) tends to perform better when there is ranging as it does not carry the larger moves.

You may have heard analysts and commentators saying getting into gold before it is too late & it is going to 'infinity and beyond'. They also often mention 'FOMO' which is 'fear of missing out'.

My thoughts are that whilst there are going to be strong moves on the price of gold, everything goes in cycles and there are as many forces pushing the price of gold down as there are pushing the price of gold up. These downward forces include; short sellers, profit takers, central banks not wanting people to lose confidence in fiat currency, commercial traders and the list goes on. We now have such excessive global cheap debt that my suspicion is that commercials/central banks/governments are using cheap money to write naked shorts on gold that pushes the price down and buying physical at the same time when the price is low. Central banks can create money out of thin air whereas gold is a scarce and precious resource. Plus it is common knowledge that many countries are now starting to prepare for a dollar collapse so are purchasing bullion as a hedge.

Charts as we know them are simply a view of psychology and as the price goes up it gets to a point where people start to think if the commodity/currency is too expensive and over-valued (over bought). At this point they will generally sell and wait to buy back in when the price goes down to a point where they think it is a good buy again. Gold is a little different as people are buying for a longer term safe-haven and although the majority of volume on spot gold is speculative, the bullion purchases are definitely longer term investments. The counter-balance is that the price of gold is measured against typically the USD, when the USD drops the price of gold goes up. So what can happen is that positive sentiment and demand is focused on gold PLUS the dollar can be dropping which accelerates the price action.

My personal opinion is that silver is more under-valued than gold and silver also has more industrial usages than gold. However silver is quite unpredictable, a bit like a family with 2 children, one (the golden one) is reliable, respectful and predictable, whereas the other (the silver one) is unpredictable, can be nice one day and terrible the next.

So, do you trade gold on FOMO, do you jump in and then regret it if the price goes down? Or do you jump in and make a squillion if the price rockets up? The reality is that the people talking about FOMO'ing in are selling when the people buying on fear. Is it better to have regret of not getting into a trade and missing a move than getting in a losing your 'hard-earned'?

There has to come a day of reckoning when the past actions of central banks and governments are realized. Gold may hit $25,000 oz. Silver may be $1,000 oz. However at that stage a loaf of bread may also be $500! My preference is to spread risk, not have too much debt and aim for consistent returns rather than trying to nail the big price moves.

Have updated the daily XAUUSD view... 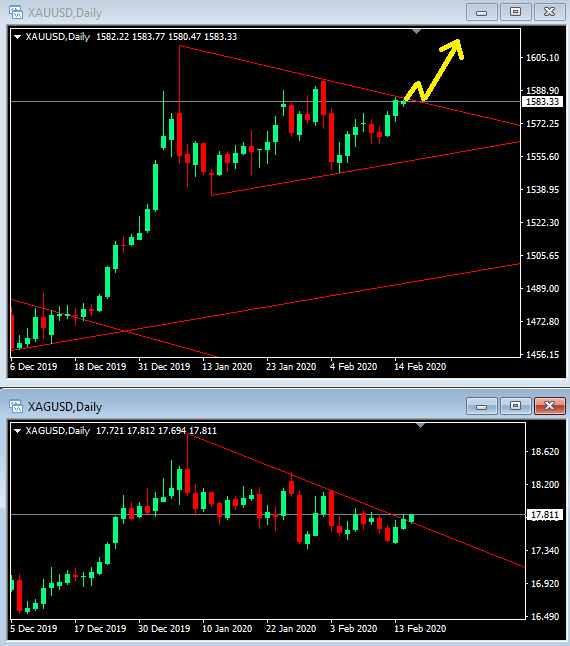 We are now seeing a different wedge view and either we are going to see a move down to the bottom trend-line or there is a chance we get a break above the upper line. The reason for the suspected break is when looking at the silver daily chart we are seeing a move above the upper trend-line (lower chart).

This is very interesting as typically silver moves would be lagging the gold moves.

The key factors are the virus, the US stock market highs (and nervousness around this) and the USD devaluation.

We have an interesting few days ahead of us!!