Mevo posted:
Bellavista: You know what. You are right. I'm full of crap.
Each time, you answered to every single point I pointed out, and really demonstrated how right you are. 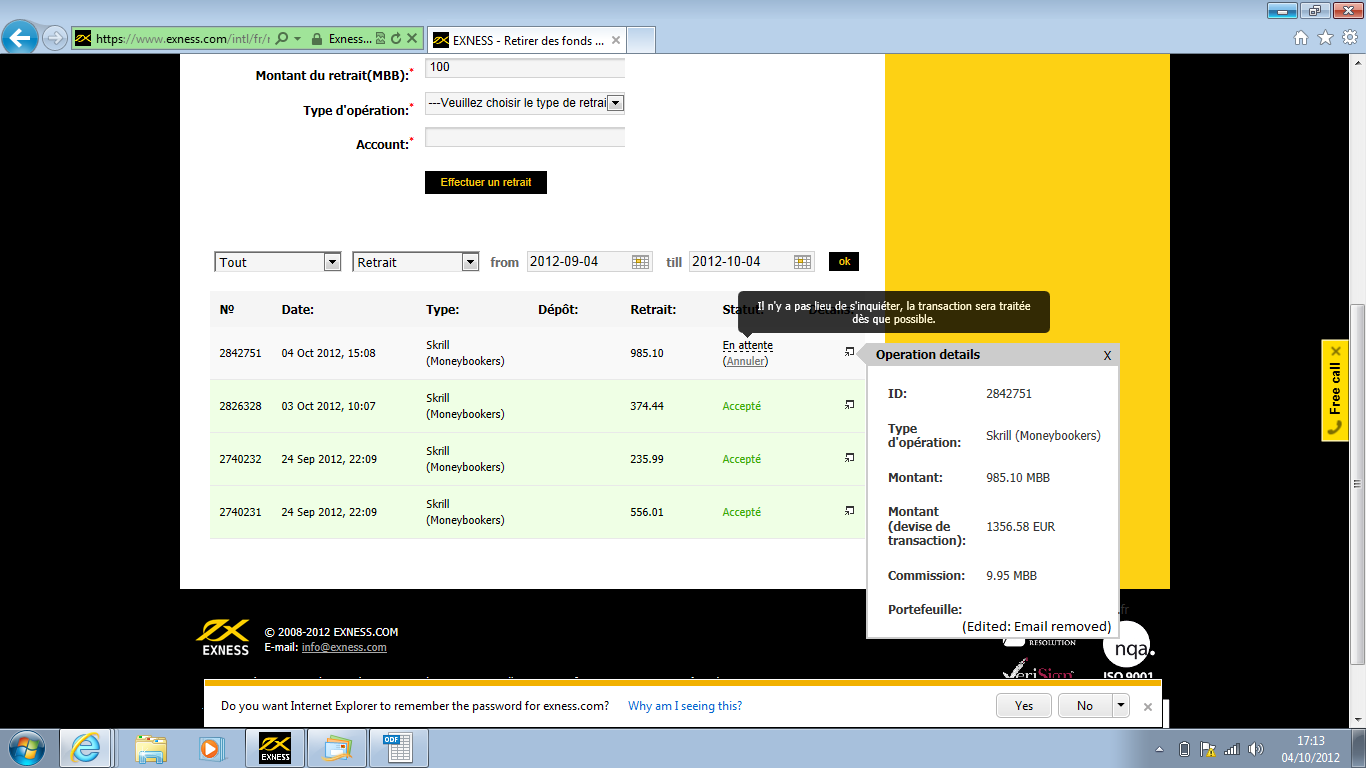 You showing that picture means nothing. Maybe your request was denied, because you deposited with a credit card before trying to withdraw what ever profit/ balance remained. Which of course would mean the deposited amount would have to be returned to the credit card, in which the remaining amount can be sent to you via moneybookers. :) So since you feel the need to post snapshots. Post everything so we can see what is really going on. Not to mention you could of easily photoshopped that :) How how about you show a screen capture (video) if your deposits and withdraws to see what has happened.

BellaVista507 posted:
It was you who made that decision.

This time you REALLY are right: Exness never forced me to open an account with them, IT WAS MY DECISION, and IT IS MY FAULT! I just want other people to not do the same MISTAKE.

Enjoy your easter weekend too.

Mevo posted:
Or maybe he indeed work for Exness ? Their 'support' are very, VERY good at playing stupid ... I never knew if they really were or were damn good at playing it.

Look at this, he is leveraging his stuff through the roof with a lot trade (basically gambling) and trying to convince me how I'm a bad trader and how he wouldn't miss 10 pips caused by a requote or a sudden slippage or what ever dafuq market makers bs excuses are for cheating...What a freakin loser, lol.

Gambling isn't defined by how much 'leverage' you use. Or the amount you wager. Please google the world to have a better understanding. Yet my trades has nothing to do with your crying and B!tching about exness. Please find it in your soul to accept the fact that exness never told you to buy or sell. It was you who made that decision. In which you are b!tching about the requotes and the spread because it cost you money. Anyway enjoy your easter weekend, and pray for guidance on how to stop deflecting.

Mevo posted:
Bellavista, you convinced me that you were not working for Exness, but just a 'complete idiot who KNOWS' everything, like already said. So still not a word on all proofs posted here and on FPA, which was the point of the discussion on the first place. And you seem to not have looked at all since you would have seen how Exness does NOT do automatic withdrawals anymore when you have won 'too much' for them: It's on the FIRST page of the forum, right there:
https://www.myfxbook.com/community/general/how-i-got-ripped-off/429695,1

And if you were able to do withdrawals, fine. Nice for you. I have been able to do some withdrawals too until one point (as you can see on the forum). Maybe you didn't won enough to be scammed, as there are regularly uploads back to your credit card, meaning that you deposited regularly too.

Or maybe you were lucky. It's all the same that all you said before: Does the fact that you managed to some withdrawals say that Exness always performs withdrawals of winning traders ? You have proofs of some trading without major problem and some withdrawals without problem. I have proofs of having been stuck with 9 lots of position that I was TOTALLY UNABLE to close, and Exness behavior after (all chats, everything. Just have a look on FPA by yourself), and a withdrawal that wasn't automatic anymore and wasn't performed.

Does your proofs prove that I wasn't scammed ? Or does my proofs prove that Exness is not always honest ?
My point is to warn people about them. If you're not affiliated with them, I don't really see the point of what you're trying to do, honesty.

There is no way everyone else has automatic withdrawals, and all of a sudden you don't. There is no magic number in which they will stop withdrawing funds from your exness account back to you. That is by far a crock of B.S. I turned 250 usd into 17,600 dollars for a client, and he was able to withdraw EVERYTHING TO HIS MONEYBOOKERS and bank wire. I would say 250 to 17,600 is a big profit! Either way, I still think your full of crap!

Maybe he just wanted to show a high percentage win. You can gamble with 5 euros, no big deal.
Maybe it's a bonus he received for free to open an account somewhere.

It's irrelevent, exactly like your trading skills are irrelevant about what we were discussing: Exness tricks and bad behavior.

Mevo posted:
Or maybe he indeed work for Exness ? Their 'support' are very, VERY good at playing stupid ... I never knew if they really were or were damn good at playing it.

Look at this, he is leveraging his stuff through the roof with a lot trade (basically gambling) and trying to convince me how I'm a bad trader and how he wouldn't miss 10 pips caused by a requote or a sudden slippage or what ever dafuq market makers bs excuses are for cheating...What a freakin loser, lol.

BellaVista507 posted:
So if you've moved on. Why are you still talking about exness.

Becaaauuse, I don't want other people to fall into the same 'honey-trap' as I almost did.

Not to mention I am not adamant about the spreads being higher.

You're adamant about spreads being consistently higher during Asia sessions. I am saying how there are major spread changes London and NY sessions and especially during Asia sessions. At least there were while I was 'doing my intraday trading' nowdays I don't pay much attention to spread in Exness mt4..

Its clear to see that your a new trader

It's clear to me that you are NOT a trader but probably a retail partner of some sorts. If you were exposing real money to the risk of market manipulation you would not be saying stupid shit like not caring about constant requotes . Maybe you are trading under 'special conditions' provided by Exness, could that be the case?! Your English reading comprehension is a total fail. Either that or you're just playing stupid and trying to put words in my mouth.