I’ve been torn how to count this pair since we made a new high this week. Until this new high was made I was counting the August 4th high as the top of wave ((iii)) and was looking for either a wave ((iv)) that either consolidated through time or price that was well proportioned with the wave ((ii)) that bottomed on June 18th. While we did a fairly good job calling the action from the August 4th high into the August 12th low the move up off of that low has been quite difficult to track and has thus had us sidelined from a trading perspective since that time. So after spending some time reviewing this pair I am modifying my base case in such a way that suggests that this entire move off of the August 12th low is actually part of wave (v) of an extended wave ((iii)) and not part of the final wave ((v)) as I had been tracking until this point. I will however still keep the topping case as the alternate case which suggests that this move off of the August 12th low is the final move of this impulsive move off of the May low.

Base Case:
There is no question that the move off of the August 12th low has been extremely messy and overlapping. This is the primary reason that I had been willing to count it as an expanded b wave through the early part of this week. While this is still a valid possibly due to the continued extensions higher an expanded b wave is less likely at this point which leaves us looking at this corrective move higher as an Ending Diagonal to complete wave (v). We still do not have enough waves to call this ED complete and are still looking for another wave iv and v before we can call this ED complete. Minor support for this wave iv of the ED is in the 1.3144 area and invalidation of the ED would come in with a break of 1.2952. Targets for wave v of (v) of the ED come in at 1.3414 - 1.3565. If this ED does fill out as shown on then we can expect a sharp reversal back down towards the 1.2861 level as this is where the ED began. Once we top for wave ((iii)) larger support for wave ((iv)) comes in at 1.3016 - 1.2770 with invalidation of wave ((iv)) coming in with a break of 1.2563

Alternate Case:
The alternate case is that the August 12th low was the bottom of wave ((iv)) and that we are currently in wave ((v)) of 5 of (C). Under this case the next high would count as a more significant top. This case is shown on both the chart labeled 'alt' and in purple on the Daily chart. Even under this case we still likely need another wave iv and v to complete the pattern so from a trading perspective there is not much difference in the short term between the two counts and we will be looking for an intermediate short setup in the coming weeks after we complete the pattern to the upside
Attachments: 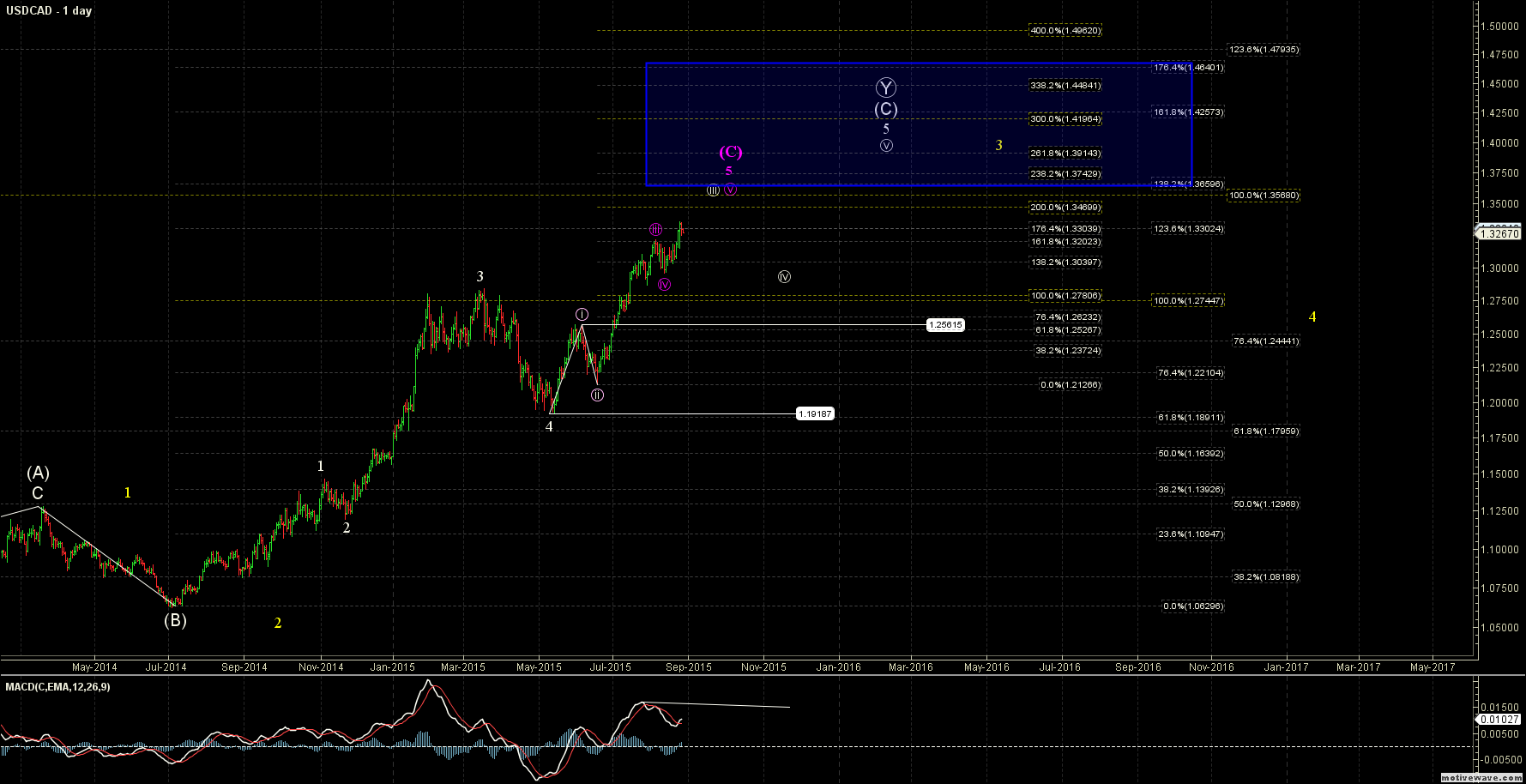 mgolembesky (mgolembesky)
Sep 01 2015 at 06:17
Member Since Aug 28, 2015   15 posts
Looks like we have topped in wave iii and are now in wave iv down. Ideal support for wave ((C)) of iv comes in at the 1.3168 level. From there would like to see one more push higher to finish off wave v of (v) of ((iii)) into the 1.3414 area to complete this Ending Diagonal. Assuming that this does fill out as expected then after the ED completes we would expect a fairly sharp retrace for wave ((iv)) down towards the 1.2861 level as this is where the Ending Diagonal began (An Ending Diagonal will typically retrace it's entire move rather quickly once complete).
Attachments:

mgolembesky (mgolembesky)
Sep 02 2015 at 08:03
Member Since Aug 28, 2015   15 posts
Today we held over the ideal support level for the wave iv of the potential ED. The move off of that low so far is looking corrective higher, which is what we would expect in an Ending Diagonal scenario as all of the waves in an ED are corrective in nature.

From here Ideally we hold over today's low at 1.3117 and make another high over the 1.3353 level to complete this Ending Diagonal up. Again after this ED completes we would then expect a strong move in to the downside towards the 1.2861 level.
Attachments:

mgolembesky (mgolembesky)
Sep 04 2015 at 10:02
Member Since Aug 28, 2015   15 posts
This mornings move down just barely held on for a deep retrace for a potential bottom of wave (C) of ((B)) down. The larger degree wave structure still needs one more high over the 1.3353 level to have enough waves in place to call the large Ending Diagonal complete. If we do not make a new high back over the 1.3353 level before breaking down then we cannot rule out a possible truncated wave v of the ED however should this occur it will make for a very unreliable pattern. For now we are watching to see if we can manage to squeeze out more more push higher to complete the pattern before topping.
Attachments:

mgolembesky (mgolembesky)
Sep 09 2015 at 05:56
Member Since Aug 28, 2015   15 posts
This pattern is becoming more and more complex as this pair attempts push into the final high to complete the large Ending Diagonal. Last night we were just about 30 pips away from making a new high which would have given us enough waves to call this large ED off of the 1.2861 level complete. This morning we fell off of last nights high and stopped just over the lower channel support level of the ED in what is potentially the (C) wave of a larger wave ((B)) triangle of this final v of (v) of ((iii)) up. As long as we hold over the 1.3136 support level then I am still looking for this to resolve higher to finish of the final wave v of the ED up. A break of this level would be the first indication that we are dealing with a much more complex pattern and potentially have already topped for the larger degree wave ((iii)) and have already begun wave ((iv)).

mgolembesky (mgolembesky)
Sep 10 2015 at 06:29
Member Since Aug 28, 2015   15 posts
This morning after the BOC rate decision announcement we saw a spike down that almost invalidated our triangle count. We did however hold just over the level that we needed to keep the count valid and have since then made a strong move back up into an afternoon high of 1.3250. As long as we hold over this morning's low then I am still tracking the triangle count as my primary count which suggests that we see higher levels into the 1.3295 level to complete the (D) wave of this triangle before retracing back lower one more time to finish off the wave (E) of the triangle. Now because we are in a very messy corrective structure I am not going to get to cute with this and if at any point we see a move over the 1.3353 level then we will have enough waves for our larger degree ED to be complete at which time a strong reversal to the downside could occur at any time.
Attachments:

mgolembesky (mgolembesky)
Sep 11 2015 at 12:50
Member Since Aug 28, 2015   15 posts
Overnight we dropped down off of what I am counting as the top of the wave (D) and we now have enough waves in place to call the triangle complete as shown by the yellow (E). With that being said we may still need OML to complete the triangle (shown in white) before we are done. Again I am not going to get too cute with this however and will consider any move over the 1.3353 level as having enough waves to call this larger ED complete.
Attachments: