Marcel Durham (MarcellusLux)
Jul 29 at 16:22
Member Since May 19, 2020   184 posts
July showed me some important points to work on and I will make a post about it at the beginning of August, because post-trading analysis is very important for me and is a base process in improving a trading system.
The July result is 7.8%, which is certainly a natural recession after a long three-month period with an average profitability of 13%.
However, this month there were quite huge trades. So, one of the trades got into the top 6 by growth percentage per trade (10.74%) 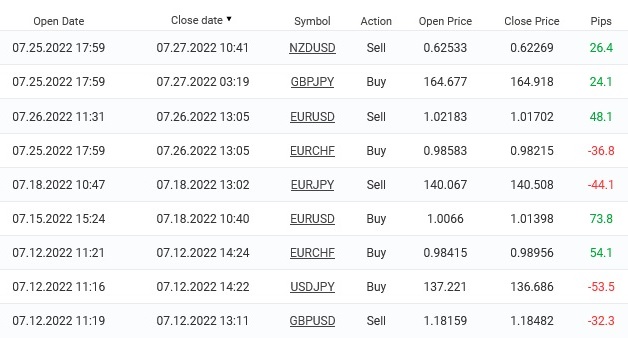 Analysing trades over the past week has shown some interesting facts that I would like to share. These trades showed the imperfection of the trading system, and also, will allow me to continue working on the mistakes that I managed to find.
The list of trades:

eur/usd sell trade was closed manually, at a price 1.01702.
Honestly, I regret that I closed the trade too early, because the EMA 100 and EMA 200 clearly showed a further fall, but I was afraid of a false break, as well as the impact of key support 1.01600 (which was also broken soon) and did not risk the funds that I have already been obtained. The opening of the trade was confirmed clearly according to the MACD data on the four-hour and hourly charts. 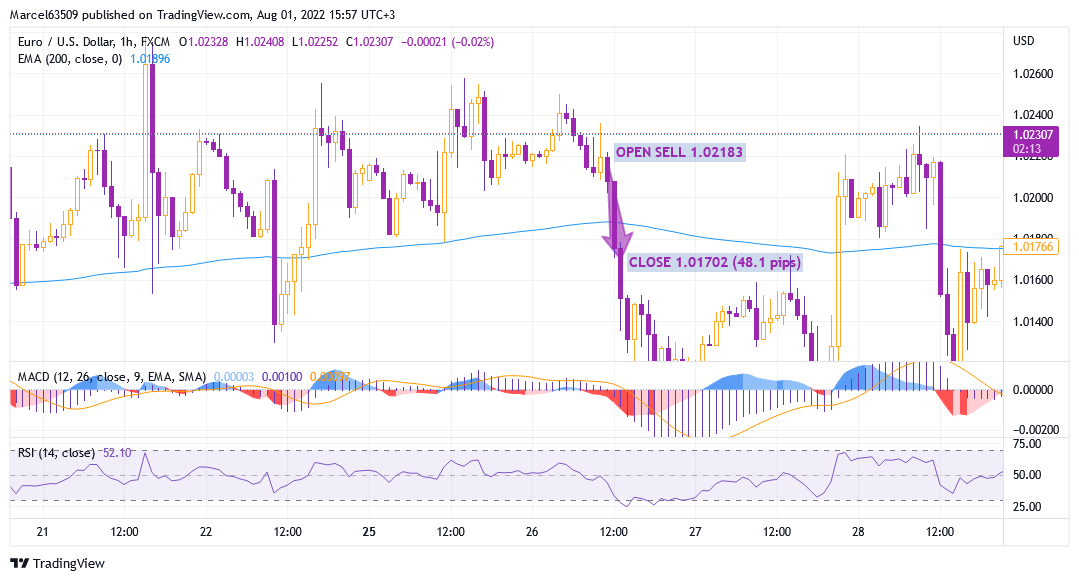 eur/chf buy was manually closed at 0.98215, although the stop loss was set lower at 0.98128.
I got MACD confirmation on the 4-hour chart, and there were no preconditions for a sell signal on the 1-hour chart. It was necessary to pay attention to the false breakdown of the EMA 200 on the hourly chart, although the EMA 100 was already below. Since I saw that the currency pair was going into a long fall according to the MACD, EMA and the formed down channel, I decided not to wait for the stop loss to be reached, which was the right decision, as you can see on the chart. 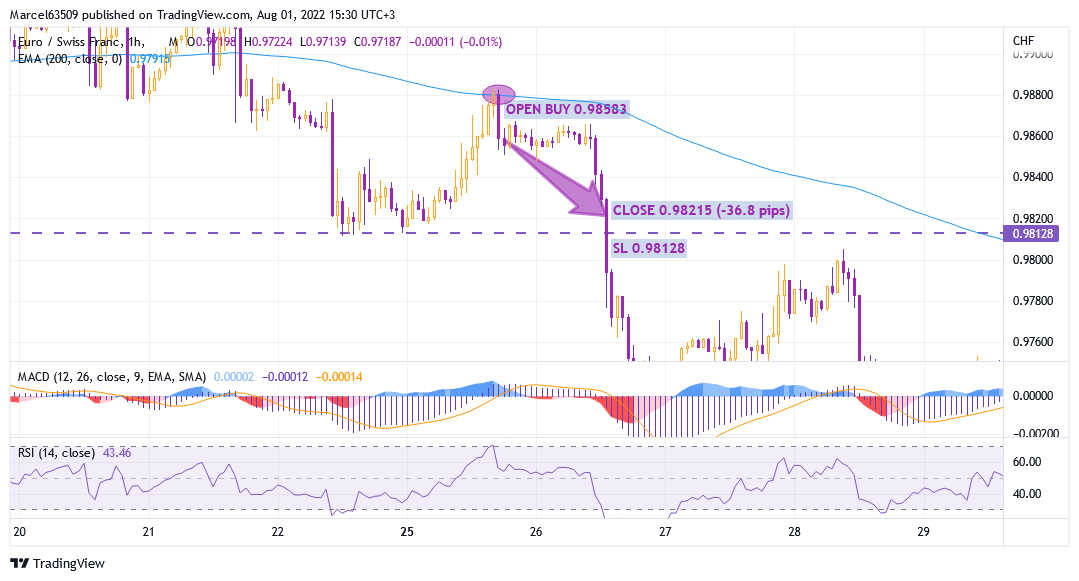 gbp/jpy buy was manually closed at 164.918 after a long drawdown that I had to wait out.
I opened a trade according to the MACD data, after breaking through the EMA 200 on the hourly and four-hour charts. If I had held during July 27, I could have taken profits around 166.00, but I decided not to take risks and closed the trade before the key resistance at 165.100. It was a hasty decision, due to some tension that had arisen during the drawdown earlier. The MACD and EMA provided clear enough data to trade further, but I didn’t use them. 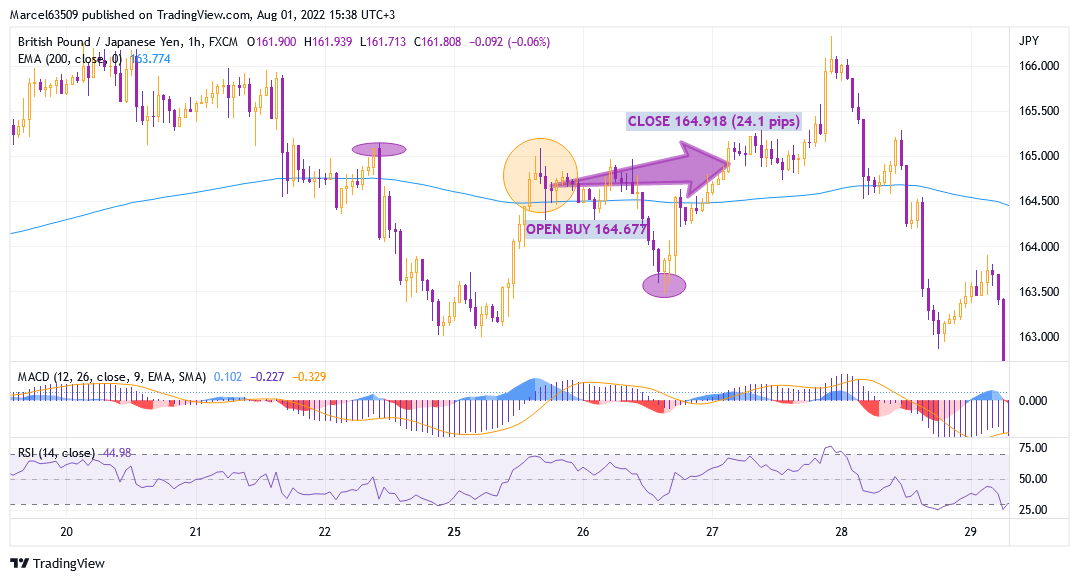 nzd/usd sell manually closed at 0.62269.
The main factor that pointed me in the direction of this trade was the divergence on the four hour chart. Also, I saw some consolidation in the EMA 200 area, which indicated that the market is not ready for a breakout and this is a sign of further uptrend correction. This is one of the few trades I have ever traded from the top of an uptrend knowing that it could be dangerous if the channel widened. 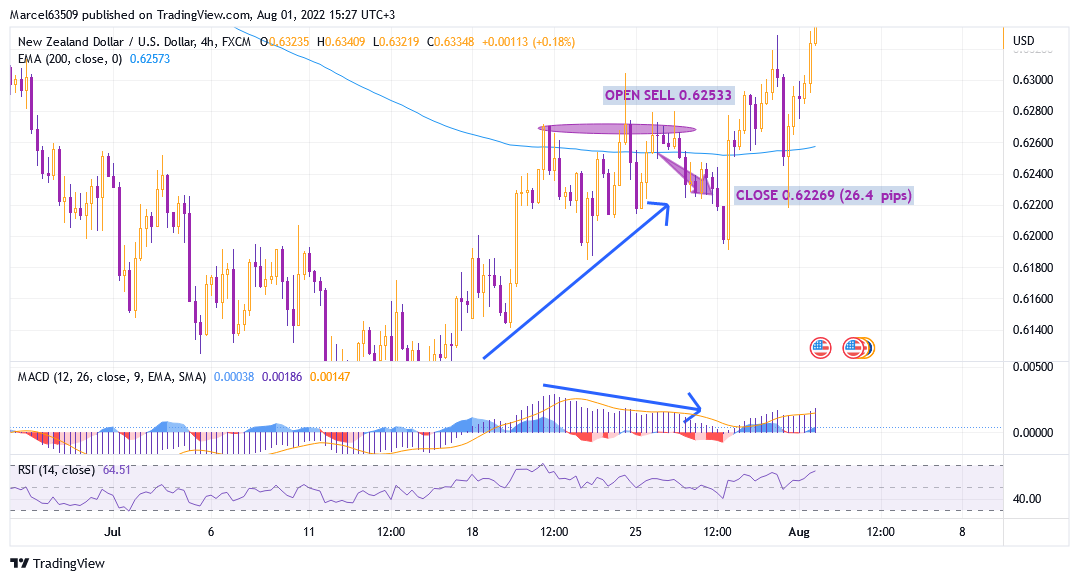 Oasis_Algo posted:
In the GBPJPY trade you didn't use stop loss?
Why?

I set it later, but initially I traded according to the trading plan and risk management algorithm. If I understand that there is a risk of a drawdown that needs to be waited out, I make a decision to set a stop loss initially, limiting the maximum allowable loss, or to manually monitor the trade and the market condition, keeping under monitoring the status of market analysis algorithms indicators, in order to fix the loss in time, as soon as the signal for this is received. If I had installed it initially, then obviously I could not have waited for the drawdown, but it was patience and clear monitoring that helped me make a profit.
At this point, I have made adjustments according to this analysis as I could have taken more pips if there was no drawdown pressure and I could have continued trading after closing the trade early on. Sometimes take a small loss for a big gain is the best decision.
@Marcellus8610
Quote Message Report

Marcel Durham (MarcellusLux)
Aug 17 at 12:31
Member Since May 19, 2020   184 posts
The first 2 trades in August with profit of 6.5%. This pace will fulfill this month's trading plan and possibly cover the lower figures in the previous one. Watch the information about the latest trades is on my website and on myfxbook monitoring page
Attachments:

JohnSantos posted:
Why is the absolute 188%? Does that mean if I had been an investor from day one my account growth would been only 188% instead of 4,000%?

4269.33% (for now Aug 31) is TWR
Time-Weighted Return (TWR) that measures the performance of a dollar invested in the system since inception. Its distinguishing characteristic is that cash inflows, cash outflows and amounts invested over different time periods have no impact on the return.
So, if you are an investor from day one, you will get this percentage growth.

197.66% (for now Aug 31) is absolute gain
Abs.Gain shows the return of the investment as a percentage of the total deposits, new deposits will affect the absolute gain.
@Marcellus8610
Quote Message Report

JohnSantos posted:
What does the 14%

loui64 posted:
he use only same broker like toni win and g dow ! same system

same with ANTONY WINs yes. these brokers create their own fund managers and end up blowing later
Quote Message Report

Marcel Durham (MarcellusLux)
Sep 07 at 12:09
Member Since May 19, 2020   184 posts
TopRank,
I manage accounts when have time and resources and only accept offers from funds that can provide a balance at least 1 million.
@Marcellus8610
Quote Message Report

Marcel Durham (MarcellusLux)
Sep 07 at 12:23
Member Since May 19, 2020   184 posts
TopRank and loui64,
I have no idea and I don't want to understand what you are posting. If you have any questions for me, then you could ask them before you start writing nonsense.
watching by what you write on myfxbook, you look like affiliated persons.
@Marcellus8610
Quote Message Report

MarioSerg posted:
You wrote it mixed? Is this a robot system?

Thank you and yes I set as mixed because I open trades manually, but use developed algorithms for analysis, trading plan building and risk management calculations.
@Marcellus8610
Quote Message Report

Lionkingdom posted:
do you still invest in Bitcoin 🙄?

I remember my post after the high 68k and first drop to 50k:

MarcellusLux posted:
Are you worried about Bitcoin? If yes, don't trade crypto.
Just accept this is a normal situation and decide if you want to participate in.

excellent result. I like your analytics, looking forward to the news.
A falling leaf does not try to influence the wind, it enjoys flying.
Quote Message Report
Please login to comment .